Someone in my YouTube comment section described this little short as "Metal Hurlant meets Lovecraft", and I think that's pretty apt. The French sci-fi comics magazine (better known in the US as Heavy Metal) had a lot of crazy content, and I certainly read the magazine and I'm sure I've been influenced by it. The Lovecraft part is the fact that I decided to join bits of his poems "Nemesis" and "Psychopompos: A Tale In Rhyme", which, in themselves are good, but I had my favorite parts and thought they'd go together very well. What I ended up with was, basically, a revenge tale of a single warrior taking out a planet-destroying giant monster. 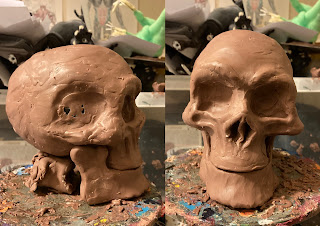 So, let's start with the monster, as I usually do. My idea was to make a tentacled skull with a distinctly evil look. I started with a rough clay sculpture of a slightly cartoony and scowling skull. The skull and the jaw were made as two separate pieces. 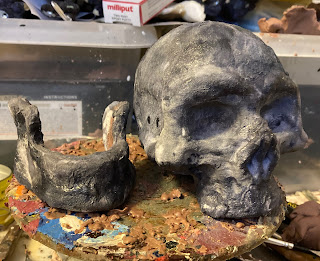 However, I didn't make a plaster mold around the sculpture as I usually do, but I instead built up a skin over the clay using cotton and latex. I just addad one thick layer, and allowed to dry slowly. 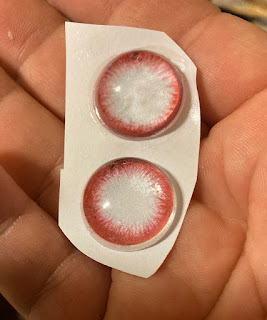 The eyes were two glass blobs with flat undersides glued to a paper printout of photoshopped blood veins. I used transparent scrapbooking glue. 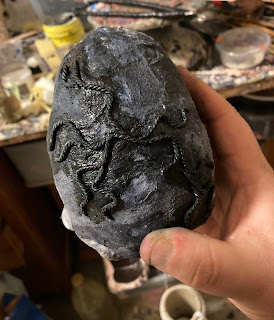 I wanted some very big, gross-looking veins protruding from the skull, and used macramé yarn soaked in tinted latex to achieve the effect. 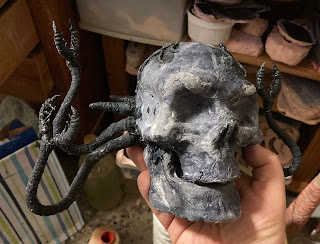 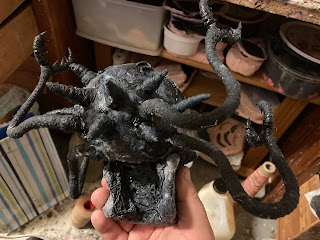 To make the skull and jaw sturdier, I mixed up some Rhino plastic, a fast-setting resin that I use for many things, and simply poured it into the hollow skull and jaw skins, slushing around the plastic to make it cover all spots. Tentacles made from aluminum wires covered with soft yarn soaked in tinted latex were attached by drilling holes in the skull and inserting the ends of each tentacle, attaching them with thermoplastic. I also made a bunch of horn-like protuberances by wrapping yarn around the tip of a pencil and painting tinted latex over the yarn. 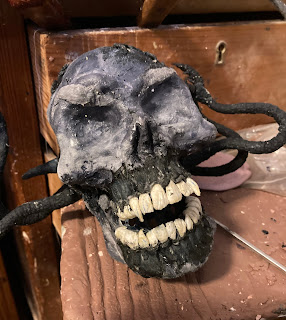 I added teeth made from cotton dipped in latex, using liquid latex as a glue. 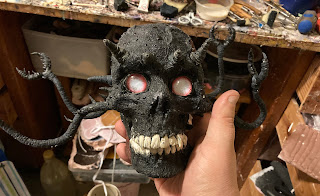 The eyes were stuck to the eye sockets with dabs of hot melt glue. 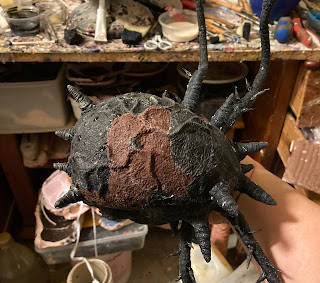 Patches of textured latex skin were cast in texture molds and attached to the puppet. 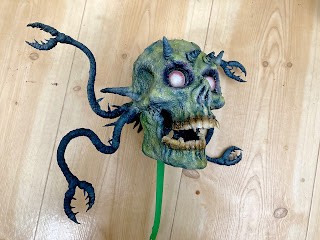 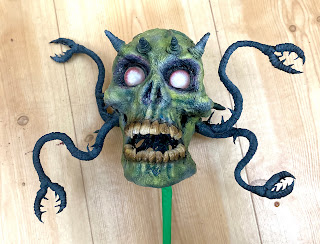 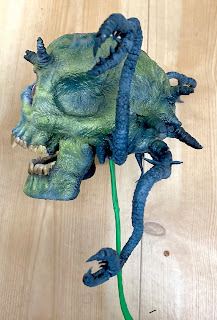 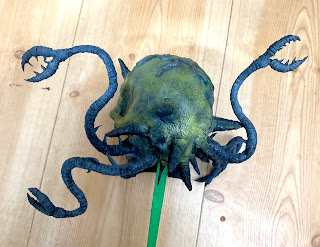 The finished puppet was painted with tinted latex and acrylic airbrush colors. A support rod was made from two thick aluminum wires wrapped in chroma key tape. 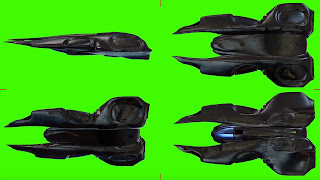 The ship seen in the film was a CGI stock footage animation downloaded from Videoblocks. In the clip I used various angles and movements were provided. 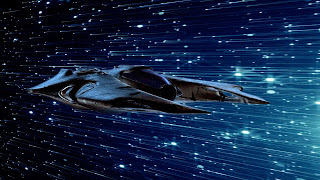 In After Effects I added the ship to various space backgrounds that were either Photoshopped or also downloaded from Videoblocks. 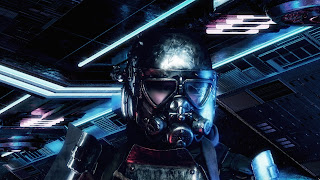 The vengeful pilot was an even bigger cheat. I simply used two still images of a dressed up person, found at stock image provider Depositphotos, and placed that guy in spaceship interior backgrounds, also a mix of stock photos and Photoshopped details.
I'm sure my interpretation of Lovecrafts poetry differs wildly from the intent of the old guy himself, but as it is, I had fun doing this film. It was a quick and creative project.

Posted by Richard Svensson at 2:29 PM

As usual, your "cheats" look better than most people's polished work. It looks so good, in fact, that I think you could have gotten away with making more repeated use of those techniques and making your piece longer, which I think would have improved the pacing. As it currently stands, it feels just a titch undercooked. I hope you don't mind my minor quibble! I LOVE your work!

By the way, have you seen Phil Tippet's full length movie "Mad God" yet? If so, what do you think of it? Did you maybe write a blog post about it and I missed it?

Richard!
It’s been about two years since I’ve commented (Google banned me for mocking Nancy Pelosi )so I don’t get to comment on YouTube and a lot of other places anymore.
We had talked a bit about MASCOT, and I found a tidbit,.. his daughter talked about how he used special metal
To do his animations, and it occurs to me she might mean spring steel! He would have soft metal or hinges at the joints
But parts of the model might have spring steel that way he could pose a puppet and then, say, twang an arm to take a motion
Blurred frame...
I can see this working in some situations. Others I suspect he strung the wire like a harp and attached the puppet and twanged
The whole thing (the wire would blur to invisibility.)
Anyway, my next thought is mobius. I bet you like him and his art, would you consider doing An Arazak short (I have no idea of the legalities or if there would even be any for a fan film)
Here’s a free copy of the stories if you don’t own it already.
https://readcomiconline.li/Comic/Arzach/TPB?id=134629
I think the second story would work just fine to your sensibilities and give you a challenge.
Especially the frame where the bird is consumed by the grass and the main character watches..the only way to do that shot (and have it work) is to slowly rotate around a center point to keep everything in frame long enough to register to the viewer.
That shot would be worth the admission. (Think Michel bay when imagining it.)
Consider the spring steel idea for the wing tips to soften the flapping action and a horizontal harp arrangement for the lead character jumping down.
I hope the Holocough bypassed you and yours.
Thanks for all the entertainment
Your pal
Scott!
How I got this published is a miracle to me.

Jerkey: "Nemesis" is just a quick ride. That's all :)
I have seen "Mad God" and found it visually impressive, but spiritually depressive. I knew Tippet was a grouch, but for me, the darkness in his film trips over into the absurd. I remember watching "Saving Private Ryan" for the first time and a bit into the massacre on the beach at the beginning I broke out laughing, for the violence and gore were piled on so matter-of-fact and just went on in absurdom that I was reminded of Monty Python. I kind of had the same reaction to Mad God.

Scott: Hello, my friend :)
I'm still in the dark as to how Starevich worked, but I'm in awe of his techniques and his relentless creativity. It's obvious that he achieved motion blur somehow. Jim Danforth once explained how he used vaseline smeared on a pane of glass between the camera and his animation set up to simulate blur in "When Dinosaurs Ruled the Earth", but I don't think that's what Starevich did.
I'm a huge admirer of Moebius, and Arzach would be a wonderful project to tackle. But, it is, of course, copyrighted to high heaven and back. Instead, I try to dream up my own worlds that would be worthy of the pen of Moebius.
No encounters with the Holocough yet, but I have other ailments to distract me.