Last time I blogged about my attempt to build a Cthulhu stop-motion puppet. This is the project I built it for. 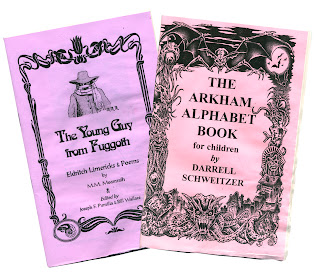 A while ago I bought a couple of fun-looking little books from eBay. They were the Lovecraftian poetry parody books (there's a high concept for you) “The Young Guy From Fuggoth” by M. M. Moamrath, and “The Arkham Alphabet Book For Children” by Darrell Schweitzer. Both of them were great fun, and I thought of adapting one or two of the texts as YouTube videos. Both books contained parodies of children's alphabets; here, of course, focusing on Lovecraftian horrors.

I bought the books directly from Darrell and asked for his permission to use the texts. He gave me the go-ahead for his book, but the other one was a different matter. Two authors had joined forces as the pseudonym M. M. Moamrath, and neither of them could be reached. In fact, they seemed to have vanished from the face of the Earth (the work of eldritch powers??)

After having spent a few days trying to get hold of said parties I finally though, what the hell -Can't I write my own humorous Lovecraftian alphabet? It turned out I actually could. I spent an afternoon composing the verses, and then sent them off to my regular Lovecraftian video narrator, Mr John Hutch of London. He sent a jolly good MP3 back to me the following day, and I started on creating the scenes illustrating the alphabet, beginning with “A is for Azatoth, that amorphous blight; B is for Byakhee, which flies in the night.”

Now, what is really the point of this exercise in monstrous Lovecraftian indulgence? Well, that is actually the point: To have fun with the monsters and texts of old Lovecraft, but also to give myself a challenge -how can I produce visuals of a huge number of monsters and places without spending forever doing it, and all of my money? This is why this project might be of interest to other creative minds. I hope to show you in this part and the next that it's possible through lots and lots and LOTS of cheating.

I knew that I had to approach each of Lovecraft's often indescribable creatures as simplified concepts; the bare bones, tentacles and slime of them, so to speak. Azatoth, “the mad Daemon Sultan”, is as ambiguous as they get. I decided to show him as a rotating lump of mouths, eyes and tentacles suspended in space. I started sculpting a flat circle of nasty details in Chavant clay, but immediately noticed how time consuming this was. When I started out in the early 1990's I knew nothing of clay sculpting techniques or mould-making and casting. I simply built everything up, from puppets to masks, using liquid latex and lumps of cotton. This was the proper way of making this monster, and I did the whole thing in just an hour or so. 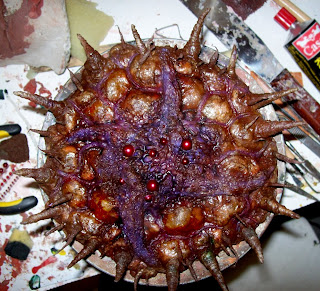 The finished latex/cotton “sculpture” was airbrushed and had red scrapbooking beads added here and there as eyes. I also did a cloth/latex hand puppet, basically a sock puppet with latex teeth added. This contraption was pushed through a green piece of cardboard and filmed live, while operated by me. 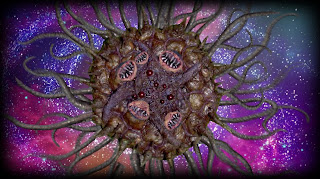 Multiple shots of the toothy sock puppet together with some animated tentacles were added over a photo of the Azatoth body sculpture, with all of it animated to rotate in After Effects. Presto: A space-bound Daemon Sultan. 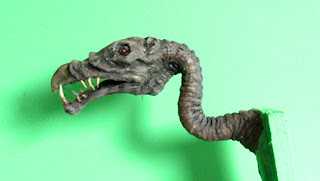 The Byakhee was done in a very similar manner. A Byakhee is a sort of flying beast, used as a riding animal by several fractions in the Cthulhu “mythos”. Lovecraft describes them as having features of ants, moles, bats, birds, decomposing humans, and other unlikely elements. Again, overthinking this creature would simply keep me from ever getting it finished, so I tried to simplify things as best I could. I started off with a jointed head and neck stuck to a piece of wood painted greenscreen green. This allowed me to animate this part of the monster's body as an isolated element. 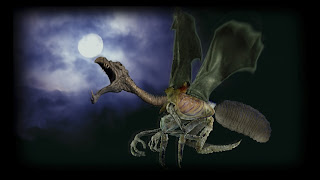 The rest of the body consisted of Googled still images of various insects and crustaceans hobbled together in Photoshop, with the arms and animated wings of a previously built puppet, the Nightgaunt, added in After Effects. A stock footage night shot was added behind the creature.
Of course, this sort of trick film cheating won't hold up for portraying a monstrous character throughout an entire film. But for the odd quick shot, building an entirely new puppet may not be the best option, especially not if it's a very complicated character.

And you can certainly do the same thing with humans and surroundings. Here's my friend Håkan reading the blasphemous book the Necronomicon, and blowing his mind in the process. The library is a Photoshopped photo collage, the book is another manipulated photo saved with a transparent background, and Håkan, filmed against a greenscreen, is spliced in between these two elements. A stock footage steam effect is protruding from his ears. 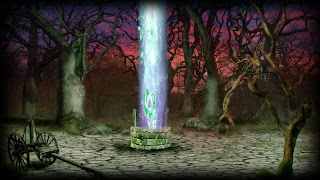 This shot illustrating the story “The Colour Out of Space” is one piece Photoshopped photo collage, and one piece stock footage CGI effect added. Even simpler, in other words. 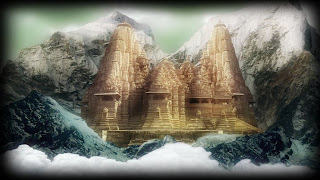 Another example: Here we're approaching the fabled city of Kadath in the Dreamlands. It's yet another Photoshop mash-up, with added stock footage sky and smoke. 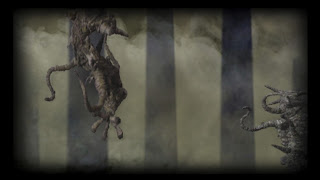 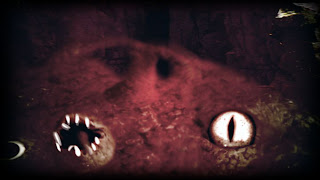 I've done so many Lovecraftian projects by now that I'm able to recycle my puppets. Here I've pressed both my flying polyp puppets from “The Shadow Out of Time”, and my claymation shoggoth from my buddy Daniel Lenneer's “The Terror From the Abyss” back into service again. 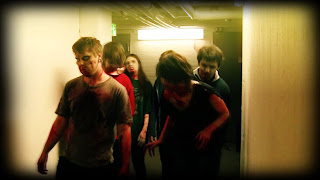 In my alphabet V is for “victims of re-animation”, in other words the zombie creatures created by mad doctor Herbert West. I helped a bunch of high school kids make a zombie film, and between takes of their movie, they shambled past my camera for this scene in my project. 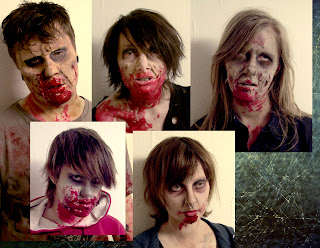 My contribution to their film was the actual zombie make-ups. I spent four hours making up about 10-12 people as the living dead. Prior to that I held a full day rubber guts-making course, which was much appreciated. 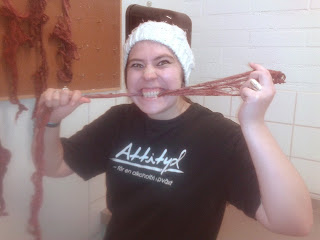 Next time I'll delve into the more complicated scenes, where puppets, people, and various Photoshop and digital image files are combined. Stay tuned!
Posted by Richard Svensson at 10:59 AM 6 comments: