Goblin Wood Behind the Scenes (of a sort).

Some more YouTube stuff. These two little documentaries were made for the DVD, so Angelica could show them to her class. They are made to be watched by a 10 year old audience and therefore very simple. But I hope you'll find something in them to enjoy anyway.

Posted by Richard Svensson at 1:53 AM 4 comments:


After finishing the DVDs for the folks involved in the film I posted it on YouTube (HERE). Still NOT happy with how YouTube compresses videos. The image quality when using HQ is fine, but the flow of the video appears disrupted and choppy. I can't have both good image and movement, apparently, though some YouTubers appear to have solved that problem. However, using their exact settings for compression doesn't solve mine. The web is weird.
Posted by Richard Svensson at 2:25 AM 5 comments:

I love sculpting characters using my favorite clay in the Universe; Chavant. Mostly, my sculptures end up as puppets or masks, but I have also done sculptures that are cast as plastic figurines. For the past three months I've been really busy finishing films for both myself and others, plus I've been doing some art for books. But I decided to spend ten minutes every morning right before I go to work on creating a sculpture, made for no other redeeming reason except that it's fun to just do it. I decided to try my hand at one of my favorite characters ever; Mr Bilbo Baggins, hero of J R R Tolkien's "The Hobbit". I think the moment that best sums up Hobbit life is when Bilbo steps out to smoke his enormous pipe right in the beginning of chapter one ("early one morning in the quiet of the world"). He hears someone (Gandalf) coming up the path beside his Hobbit hole and starts to turn his head. 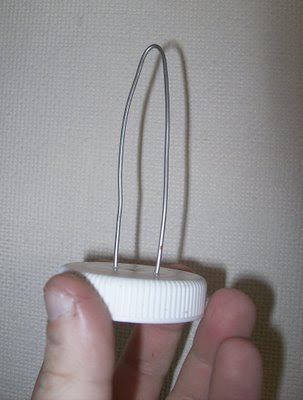 This sculpture was going to be quite small, but still needed some support. I made this very simple frame using tin wire and a plastic bottle cap. 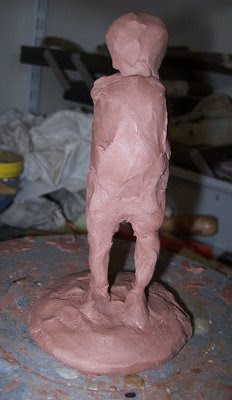 The humble beginnings of Mr Baggins. I soften the Chavant with a heat gun and just slap it on to form a basic shape. 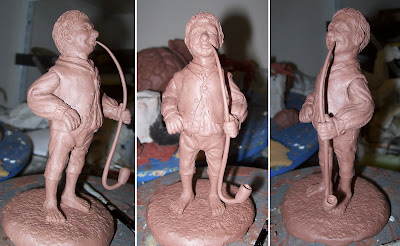 I was pretty sure I had taken a couple of photos of the sculpture in the middle stages of its creation. Obviously it wasn't so, so we'll skip right to the finished version. I added a clay pipe just for fun. It wasn't a part of the finished casting. 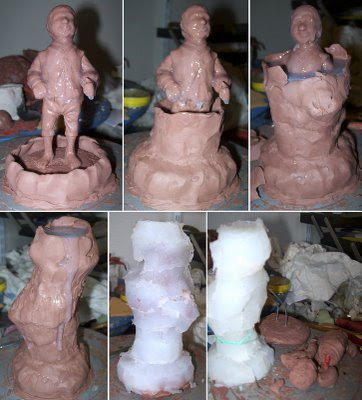 Here's a bunch of photos showing how the silicone mold was cast. I used DragonSkin Q from SmoothOn Inc. First I sponged on a very thin layer, just to get rid of air bubbles. I then built up a Chavant clay wall around the base, then pouring in silicone and letting it seek its level. Then the clay wall went up a little futher with more silicone, and on and on until the sculpture was covered. This way I was able to make a very sturdy, yet not overly thick, silicone mold. In the last two images you can see the clay wall removed and then the sculpture dismantled and taken out. I had to cut the mold in the back a bit using a hobby knife. I also cut the space between Bilbo's legs inside the mold in order to get the support frame out. 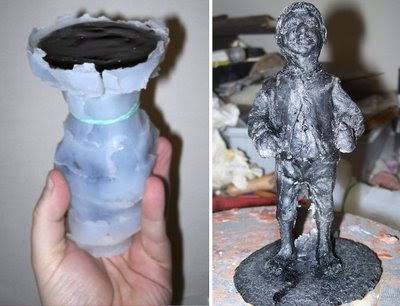 SmoothCast 325 (also from SmoothOn) was poured into the mold. To the right; the casting just after it came out of the mold. 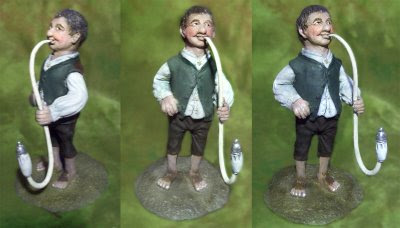 The finished Bilbo figurine. The pipe was made by softening Friendly Plastic and rolling it into a long tube, then shaping it. The head of the pipe was made out of Apoxie sculpt. But if I start making any copies I'll make a pipe head that can be cast instead. The figurine was painted with acrylic airbrush colors. In some areas I painted on the color with a brush.
I think this turned out quite well. Bilbo is 13 cm tall. You see, the plan is now to go on doing some other characters from the book; Gandalf, Thorin, Gollum, the Great Goblin and so on. Making Bilbo this size will allow me to make many of the other characters in scale, ending with Beorn. The Trolls and Smaug, if I ever make them, will have to be in a scale of their own.
It seems my mornings will be booked for a while ahead. Roll on Gandalf..
Posted by Richard Svensson at 11:58 PM 2 comments: