Rawhead and and Bloody Bones

If you're a horror fan you're probably acquainted with the monstrous character of Clive Barker's "Rawhead Rex", either from his original Books of Blood story or from the flawed 1986 movie adaptation of that story. Either way, Barker's Rawhead is a primal creature with a penchant for biting some people's heads off and baptizing others by pissing on them. Without a doubt, Barker was inspired by the folkloric character of Rawhead and Bloody Bones, a very nasty boogeyman from Great Britain who appears in a variety of guises, as well as a monster in North American folklore. Generally speaking, Rawhead and Bloody Bones eats kids and has googly eyes, big teeth, and big claws. His origin and physiognomy vary depending on from where a particular story comes. For my adaptation, I chose to use an English nursery rhyme, adding a verse of my own to make it slightly longer for my video. 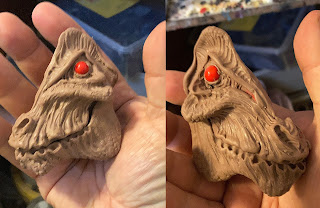 My design of Rawhead's head was a mix of various animalistic features. I looked at skulls from horses, dogs, and apes, and this is what I ended up with. The crest on top of the head comes from the gorilla, an anatomical feature to which the jaw muscles are attached for extra chomping power. Bigfoot, by the way, is also said to have this crest. All sculptures were made in my preferred medium of medium-grade Monster Clay. I used two plastic pearls for the eyes. 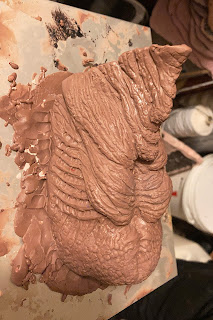 I sculpted the torso as looking like it was both powerful but decaying or flayed. I don't really know where I was going with that one, but I like how it turned out. 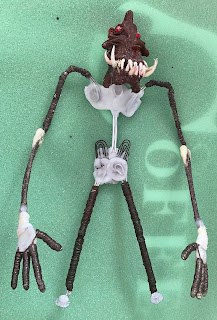 I cast the head in tinted latex, adding teeth made from cotton dipped in latex. The two red pearls have now been finished as eyes with blue irises, covered by a lens of UV resin. They're placed in sockets made from silicone clay. The armature was very simple. It doesn't really show in this picture, but the forearms are split into two bones, like on a real skeleton. I wanted that feature to be visible in the finished puppet to make the character look a bit zombie-like. 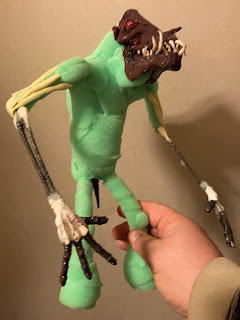 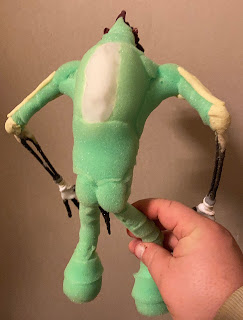 You can see that split forearm better here. The muscles on the arms were a mix of thin polyurethane foam soaked in latex and a cotton-latex mix. The rest of the body was padded with layers of soft foam. I didn't bother with adding detail to the legs as they would be covered with fur. 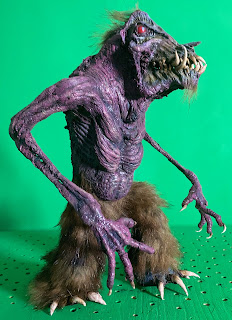 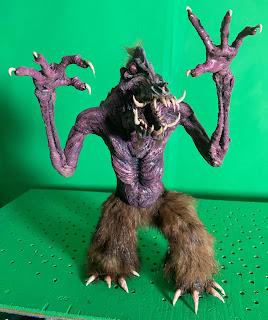 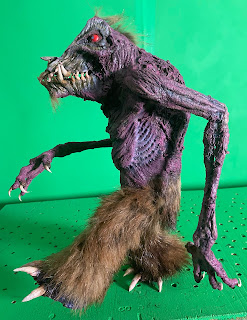 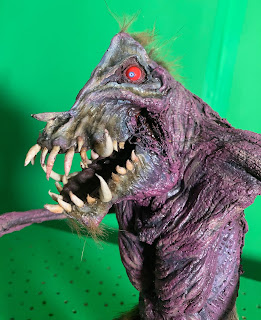 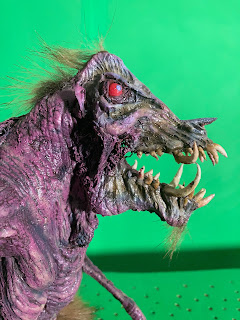 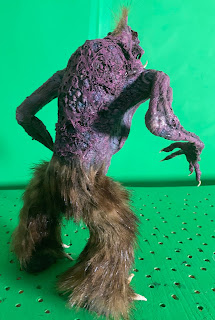 The finished Rawhead has a latex skin, in parts cast from old skin texture molds. The body was painted with a mix of dry brushing on tinted latex and then adding details using acrylic airbrush colors. The fur on the legs comes from an old winter hat. The straggly bits of skin covering the back and the arms were made with the "chunks ó flesh" method, where tinted latex is stippled with a bit of foam onto a flat surface and then scratched apart with my fingernails and pulled off the surface into chunky organic-looking bits. 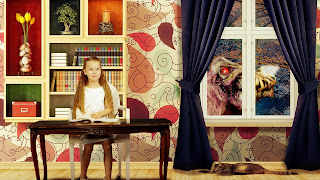 I get both praise and critique for my "collage" method of creating shots in my films. Some really like the look of it, others find it fake and distracting. It's the way I make my films and I'll keep making them like that. I used a couple of stock footage shots featuring people in this film. One is a scared man in bed, and the other is this good girl diligently doing her homework. Apparently, and according to the nursery rhyme, Rawhead has no interest in good kids, so she's in no danger. This composition is made up of the following twelve layers in After Effects: A stock photo of a wintry garden outside the window, an animation of Rawhead, the steam on the window, the wallpaper, the bookshelf, the window with curtains, the floor, the cat, the shadow under the cat, the girl at the table, the shadow under the table, and lastly an adjustment layer which adds a unifying color grading. 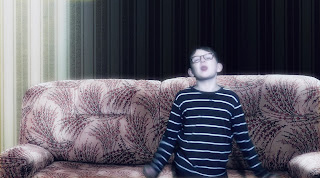 Hannes Karlsson, who gets eaten by Krampus in my Krampus film, and fights the two-headed monster in that video returns as a nasty kid here. I simply re-used a take from Krampus. 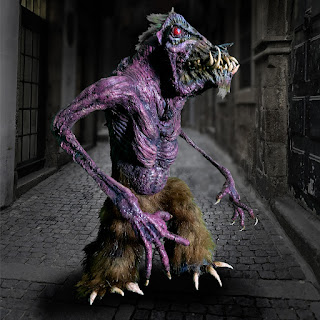 I like doing projects inspired by folklore, but my YouTube audience seems a bit divided in their opinions. I try to diversify as a content creator and, most important of all, follow my own desires, making what interests me personally. And how else can I create good films if I don't do that? So much of folklore borders on horror, if not being straight-up horror, and the subject also offers endless possibilities for creating moody, atmospheric shots showing "real" places like the countryside, with old buildings, bogs, and forests. I say "real", because most of it will still be still images and stock videos composed in Photoshop and After Effects to create my ideal environments.
There's a big chance that old Rawhead will return and star in a feature-length film produced by my maverick movie buddy James Balsamo.
Posted by Richard Svensson at 12:34 AM 2 comments: