Swedish film editor and CG FX creator Christoffer Åström contacted me about building and animating a cartoony devil for a music video featuring US band "Angry Johnny and the Killbillys". It's supposed to be a tiny imp, haunting the video's protagonist, and hounding him into doing dastardly deeds. Is the devil real, or is it just in his head; who knows! 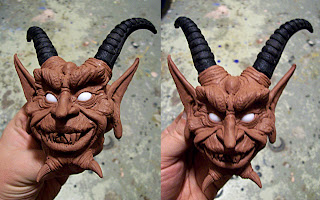 I started off with sculpting the head to get an interesting expression, defining the character. This puppet was going to be about the scale of the “real” devil, and slightly bigger than my usual puppets. Plastic balls stood in for the eventual finished eyes. 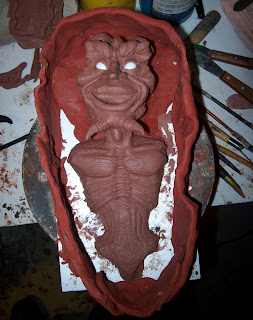 As I usually do I sculpted the front half of the puppet's torso, allowing me to have control over the most visible part of the puppet. This whole piece is cast as a loose latex skin, into which I can add padding, eyes, and the head armature. 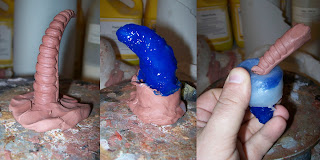 The horns were actually the first thing I did, as you might've figured out from that first image. I did one horn sculpture in Chavant clay, based on the wild mountain Ibex goat. The sculpture was encased in soft silicone (DragonSkin FX), and removed, pretty intact, actually, after the silicon mould had set. 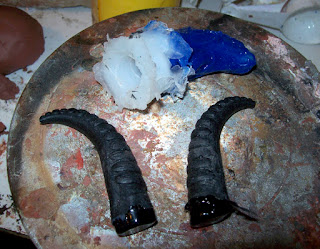 Two horns were cast in black-tinted SmoothCast 325. No news here for those of you who usually frequent my blog; I've been using the same materials for years, and as long as they work for me I see no reason to change to something else.

The hooves and the teeth and gums of the devil were also sculpted in clay and cast in plastic. For the teeth I used a different plastic; the slightly more flexible, and therefore more durable, SmoothCast 65D. 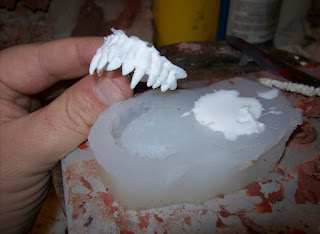 SmoothCast 325 can be a bit brittle when casting minute detail, like miniature teeth, for example, and the 65 D variant doesn't have that problem. It also cures solid white, which of course is the perfect base colour for teeth.

I did a slightly different armature this time around. Instead of using two or more tightly braided medium-thick aluminum wires I used very thick aluminum wire as it was. The “bone” sections of the armature were, per my usual method, covered with Friendly Plastic thermoplastic, but I also added long nails with the heads cut off. This meant the wire had to go exactly where I forced it. It bent, and it stopped with virtually no jiggle at all. You want as little jiggle as possible when you animate. This is the way I'll be building all my armatures from now on, even smaller ones.


The protruding rods on the back are screws embedded in Friendly Plastic. They're there simply to act as a sturdy piece I can grab hold of when animating. The cast cloven hooves were added to the armature, with wingnut tie-downs in the bottom. 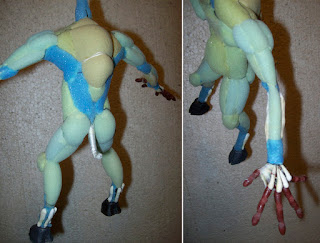 The padding of the body was constructed out of variously soft and denser pieces of polyurethane foam, following a human muscle diagram. Here and there latex-soaked cotton was added to accent bonier parts, such as the hand and the legs. 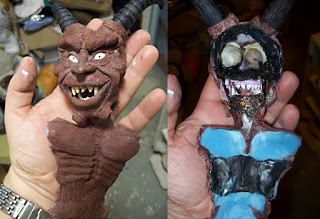 Here's the cast torso latex skin, with Friendly plastic holding together different parts on the inside, such as the horns, the teeth and the aluminum jaw wires. There are also wires for the upper lip and the eyebrows. I've glued pieces of foam to certain areas to help fill out the skin in the best possible way.

The eyes were simply made from white plastic balls painted with hobby paints and glued into the eye sockets. The inspiration for these orbs were the eyes of Paul Blaisdell's low-budget monsters from various 1950's and 60's films. Blaisdell's monsters were always a tad crude, but his designs really grab you. His monster eyes were bloodshot and bulging. My original intention was to have moveable eyes, but the slit pupil design proved to be tough to keep in proper alignment. These static eyes will do the trick. 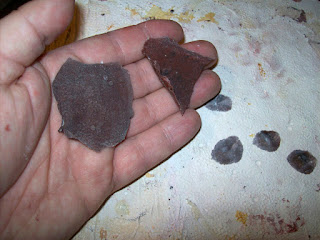 The padded body was covered with patches of cast latex skin, taken from flat plaster moulds. Liquid latex was used as a bonding agent. 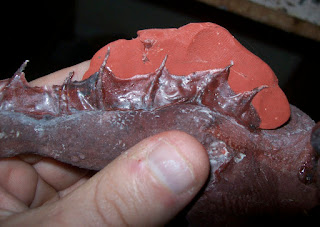 I decided to put a fish-fin-like fringe along the puppet's arms. This detail was inspired by medieval art, showing devils with such protrutions here and there on their bodies. The bony outgrowths were simply made by dipping cotton in latex and rolling it between my fingers into a pointy shape. After all these pieces were stuck to the arms, I pressed very soft modelling clay against the arm, embedding the cotton “needles” about halfway, and then painting tinted latex over it. 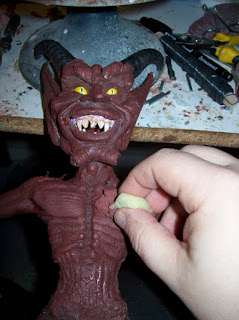 The finished patched skin on the puppet was given a dry rub of tinted latex, and then subtle detailing with acrylic airbrush paints. 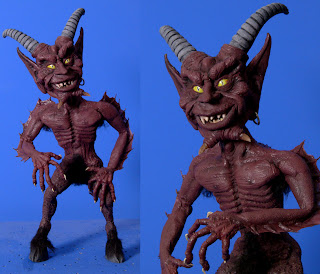 And here's the finished bad boy, with some fake fur added to his feet and private parts, and a slight paintjob on his horns and hooves. Well, not quite finished, as he'll be wielding a trident pitchfork too (of course). When that's made I'm probably off animating. I shall report on the progress when the project is up and running. 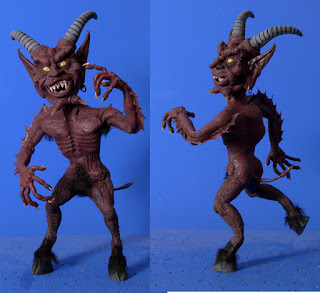 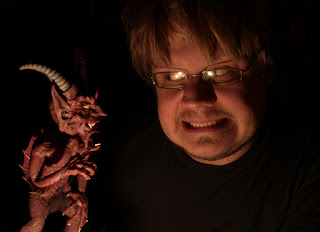 Posted by Richard Svensson at 9:29 AM 9 comments: