Some people have been telling me for years to make a YouTube Halloween video, and this year I finally made one. I spent a week on the project, and used mostly older puppets, but a few unused ones snuck in there too. Here's the video:


But I managed to make two new puppets. Here's the first one. 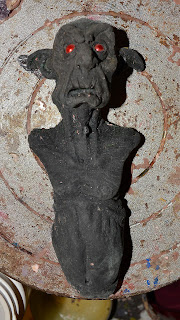 This is actually a quite old latex cast I found in one of my stashes of stuff-I-should-throw-away-but-never-does. Originally it was supposed to be a Mewlip (featured in my Mewlips video), but I decided to go in another direction with these creatures and discarded this design. However, I had already cast this latex skin and added the two reflective bead eyes. Since the skin was in good shape despite the years (latex will, as you know, start to crumble after some time) I decided to use it for one of my new Halloween puppets. I added sheets of polyurethane foam on the inside of the skin, using liquid latex as a bonding agent, to bulk it up a bit. 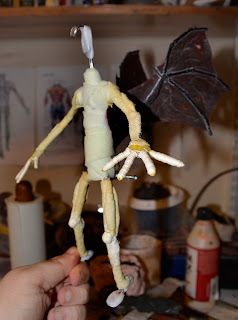 I also bulked up the aluminum wire armature with some foam wrappings. Cotton and latex was used to build up muscles on the lanky arms, and a pair of latex wings were attached to the back of the armature. You can see the whole wing-making process HERE. 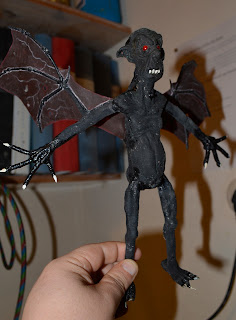 Here the puppet has been given a skin made from patches of latex skin cast in plaster molds. The nails are made from thick paper dipped in latex. 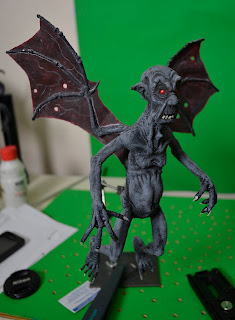 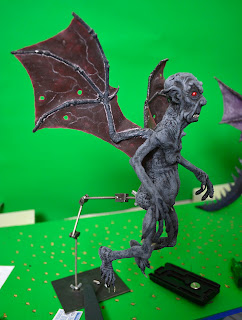 And here's the finished puppet. I also placed a wing nut in the puppet's posterior, so I can attach a flying rig. 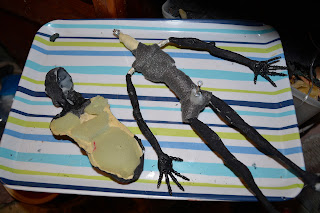 Here's the second original puppet in this video. It's a lanky, pot-bellied zombie with a slightly (or maybe very) cartoony look. Like with the other puppet I had already sculpted the torso and created a mold for it. I can't actually remember what I made the sculpture for, but I thought it would fit right in here, and it did. As you can hopefully see in this photo the cast latex skin has been padded with thin sheets of polyurethane, and the armature has also been padded in the same way. Also, this guy has a wing nut in his butt.
These two puppets are very simply and quickly made, but perfectly functional in every way. What cuts down the construction time in this case is that none of the puppets have articulated faces. No rotating eyes or jointed jaws. 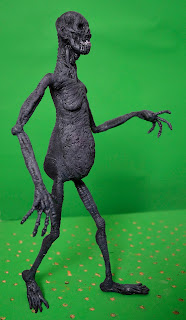 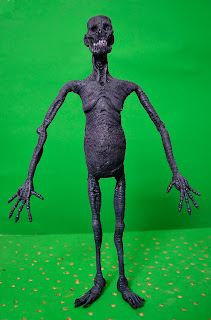 The finished goofy zombie. Both these guys flut past the camera so quickly it'd be a waste to just use them once. No idea what the future holds, but I'm sure you haven't seen the last of them.
Posted by Richard Svensson at 7:37 AM 4 comments: