I just posted a short film clip on YouTube about one of my biggest pastimes; making latex monster masks. I thought I'd post it here as well. One of the masks featured is the Dagon mask I blogged about earlier this year. Also, I included a gallery of some of my LARP work. 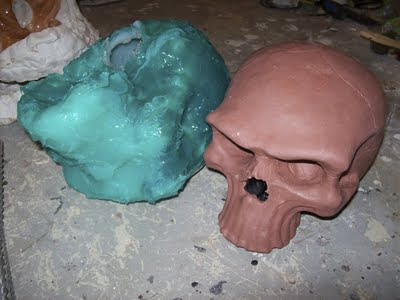 Some of my best friends are very much into Live-Action Role-Playing (LARP), meaning they dress up as orcs, elves, warriors, clerics and various ancient and fantasy-inspired characters. They help me out making stuff for my films (clothes, leather- and metal work, etc) and I return the favor by making masks and various slippery slithery things for them. Recently I did a plastic orc skull for my friend Liz, who often makes clothes for my puppets and people appearing in my videos. As usual, I first did the skull as a sculpture in Chavant clay and built up a mold in Dragon Skin silicone over it. The actual skull was cast in the mold with SmoothCast 325 and painted with bone white car spray paints and acrylic airbrush colors.

I wanted a (what is now) retro orc look, inspired by the big-jawed orcs made popular in the late 1980's and during the 1990's by British Games Workshop. This design is frequently referred to as the "Warhammer" orc. The orc designs from Peter Jackson's "Lord of the Rings" films have pretty much taken over, which means that the modern orc is quite human-like and thus easy to recreate for the LARPers. The older orc was green, muscular and a bit cartoonish. I kind of like them better and I'm trying to re-introduce them (along with a friend) into the Swedish LARP arena by subtly changing the look of my masks and props. Someday we'll explode onto the LARP scene with a fully fledged retro orc suit! (this is the stuff you ponder when you don't have a proper life to worry about)
Posted by Richard Svensson at 10:04 PM 5 comments: