I've mined H P Lovecraft's sonnet cycle "Fungi From Yuggoth" for video material once before, with my film "Nightgaunts." This time I picked another short poem, "The Familiars", mainly because of the mood in it. But there are monsters to be had as well, of course.

So, let's start with the monsters. There's actually only one monster, though animated twice to look like two critters. The familiars of the title are only described as "two crouching things" with "great black wings", which, of course left me with quite a big choice of designs. I went for a critter that I haven't been able to squeeze into anything just yet; the toad-like abomination Gol-Goroth, created by Robert E Howard. I'm sure he had minions, just like Cthulhu's star-spawn, and this is my version of these theoretical critters. In this case I only sculpted one part of the creature, the head, using medium grade Monster Clay, and a couple acrylic oval scrapbooking decorations. 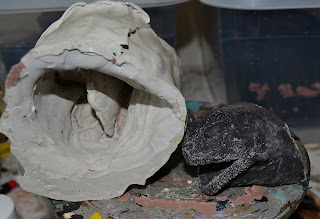 The mold for this sculpture was created with Ultracal 30, which, by the way, has been impossible to find in my native Sweden for many years until now. I cast a hollow skin for the head with tinted latex. 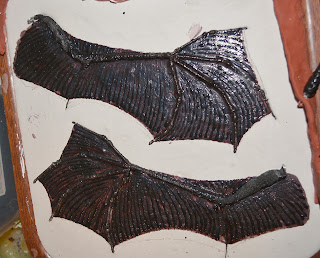 You all know my bat wing-making trick by now; lowering the wing armature halfway down into soft plaster and then building up the wing membranes with latex over the plaster surface when the material has set. 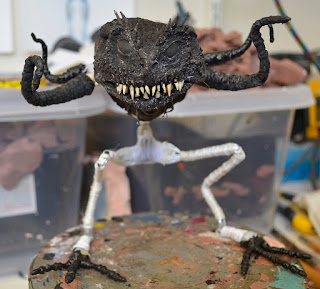 I also used my standard aluminum wire / thermoplastic armature, attaching the head skin before starting the filling out of the body. The teeth and the horns on the eyebrows were made from a mix of latex and cotton rolled between my fingers. 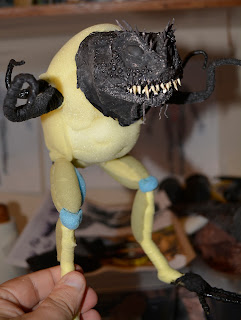 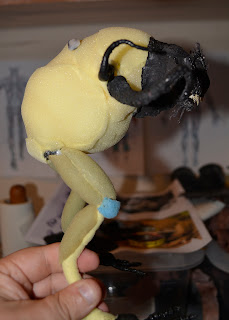 The padded body of the puppet looks very dense and bulky, but it's actually mostly filled with cotton balls held in place with bits of thin polyurethane foam. Dense foam was used to create the muscle shapes on the legs. 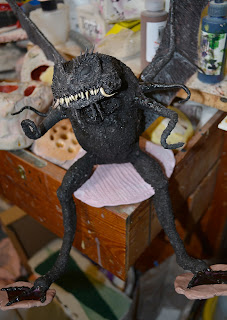 After the wings were attached to the body armature, the whole thing was covered with patches of latex skin cast in a flat plaster skin mold. After that, the puppet was given a unifying coat of tinted latex, followed by some detailing with acrylic airbrush colors. 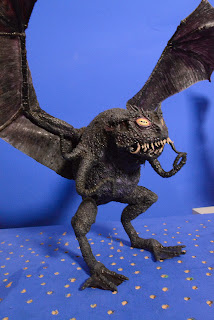 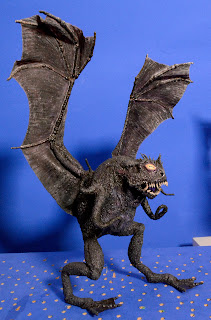 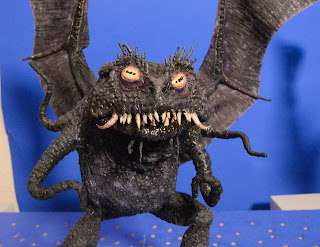 The finished puppet stands about 20 cm tall (without the wings) and is attached to the animation stage using t-nuts in the feet. The teeth and eyes are covered by Glossy Accents scrapbooking plastic. 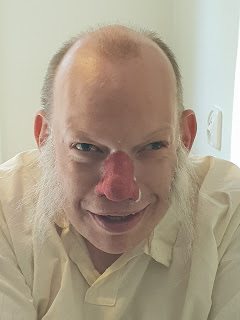 The protagonist of the story in the poem is the mysterious John Whateley, a farmer who after finding "some queer books" in his attic is becoming a sorcerer, or so the local populace believes (and they're right). I asked my buddy Andreas Pettersson to play Whateley. Andreas has been in a couple of my films before. He's the inventor of the wheel in "The Age of Invention", and the idiot savant in "The Thing In the Moonlight." To make him look more rugged I applied a bulbous latex nose and crepe hair whiskers and eyebrows. 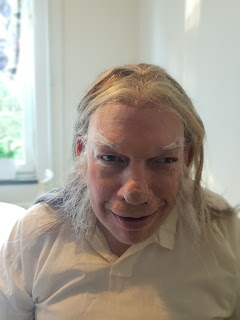 The nose was glued on with Prosaide adhesive, and the seam between latex and skin was covered up with a mix of Prosaide and cabosil, creating a butter-like paste which can make the seam disappear completely. All these areas of Andreas' face was then covered with rubber mask greasepaint, and touched up with various shades of powdered rouge. A wig of real human hair guilds the lily. 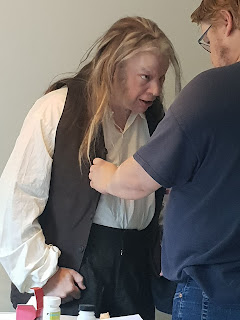 I'm not really sure when this story actually takes place. It's simply in bygone days, and Andreas wore clothes that were used by early 20th century Swedish country folk (though the poem is supposedly set in New England). 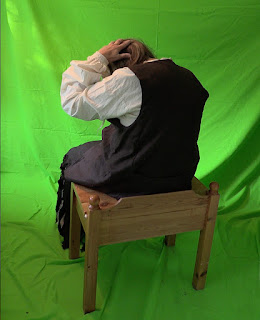 All of Andreas' scenes were shot in his kitchen against a green screen. It looks very primitive, but that's all you need. The After Effects plugin Keylight takes care of the rest. 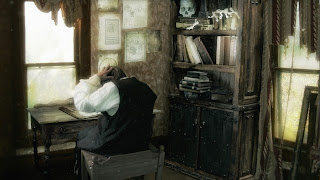 Most of the backgrounds I used here were Photoshopped in various ways. The original photos were downloaded from stock image site Depositphotos, where I have a subscription. 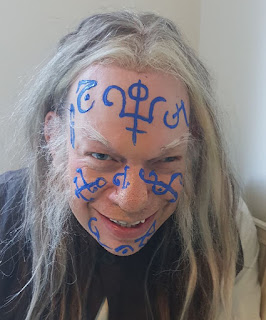 You don't see John Whateley's face until the very last shot, where he turns to the camera. The poem said that "funny lines got creased into his face", which is the country people's way of expressing what they see. I decided that these funny lines would be occult symbols revealing a glowing energy emitting from behind Whateley's skin. To achieve this effect I simply painted the sign onto Andreas' face using water-based blue screen paint. Before I removed the greenscreen behind him I first keyed out the blue lines in his face. 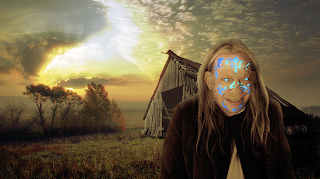 I then added a pulsating digital light effect in the layer behind Andreas. The effect is sufficiently odd-looking, I think. I also animated a pair of glowing pupils. 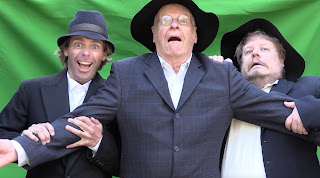 Finally, the three men that go to confront Whateley were played by, from left to right, Andreas Nordkvist, Håkan Håkansson and me. We shot the scene against a green screen hung on the outside wall of my garage. There are a couple brief scenes of other people in the film, but they're actually stock footage clips. The poem was narrated by Isaiah Max Plovnik, a long-distance collaborator from the US, who has also narrated "The Thing In the Moonlight."

I'm sure you won't be surprised to hear that there are more Lovecraft adaptations coming up, but which one gets finished first remains to be seen.
Posted by Richard Svensson at 8:40 AM No comments: