Finally getting on with my Lovecraftian Alphabet video project! Here are another three stop-motion puppets representing various cosmic horrors. Again, these were built pretty fast, using a minimum of materials, and therefore dirt cheap to make. 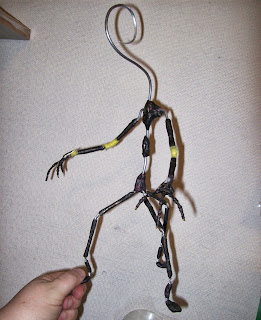 If you know your Lovecraftian horrors, you know that Nyarlathotep is a key figure in the Cthulhu mythos pantheon. He/it can turn up in a number of shapes. for my puppet I chose the so-called black howler, or red tentacle. Basically, this avatar of Nyarlathotep is vaguely humanoid, with three legs and a slithering tentacle instead of a head. It does seem to have a sort of mouth, though. A basic aluminum wire / Friendly Plastic armature was slapped together. The yellow stuff over the arm joints is thin foam rubber. 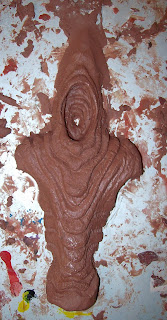 To make the front of the puppet slightly more detailed and controlled, I sculpted a chest, mouth, and torso in Chavant clay. 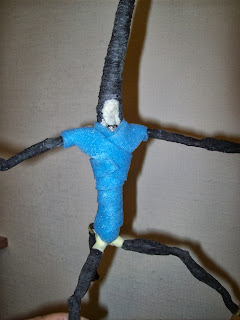 The arms and legs were covered with rolled lengths of cotton dabbed with black-tinted latex, making these limbs very thin and sinewy. The body was wrapped with thin sheets of foam rubber, and the tentacle shape was created by wrapping thick soft string around the aluminum wire. 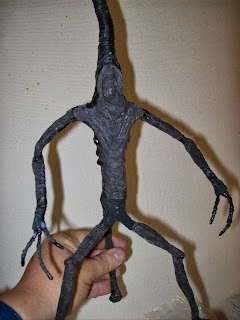 Before painting the whole body was covered with cast patches of latex skin. 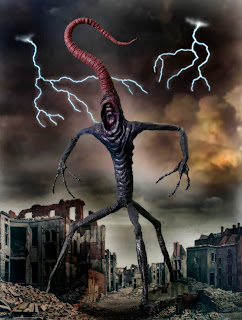 Here's the final monster, with PAX paint smoothing out the overall colour scheme, and acrylic airbrush colours adding shadows and highlights.
Yes children, this is how the world will look when the black howler finally appears on Earth. 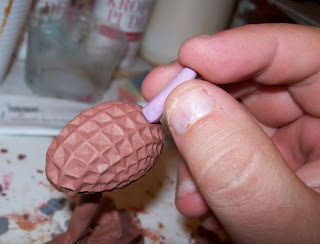 In his story "The Whisperer in Darkness" Lovecraft describe the alien Mi-Go race thusly: "They were pinkish things about five feet long; with crustaceous bodies bearing vast pairs of dorsal fins or membranous wings and several sets of articulated limbs, and with a sort of convoluted ellipsoid, covered with multitudes of very short antennae, where a head would ordinarily be."
These creatures are also known as "the fungi from Yuggoth", adding a bit of ambiguity to their nature; are they plant, animal or something completely different?
Sounds like the Mi-Go would make interesting stop-motion puppets, don't they? The only thing I really had to figure out was how to make that peculiar head. The "convoluted ellipsoid" is made up of a multitude of fleshy pyramids, and somewhere on or between these the antennae grow forth. I decided to create a backwards sculpture of the head shape, by pressing a hand-made pyramid-shaped silicone tool into a clay ellipse.

This shape was the covered by a thin layer of liquid latex, and then more latex covered with cotton. 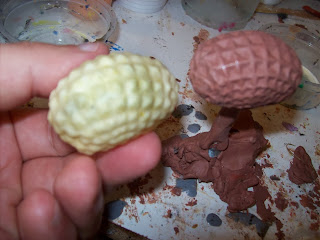 The Final shape (although unfortunately blurry here) had a leathery texture, and slipped right off the clay, when I turned it outside in like a banana peel. 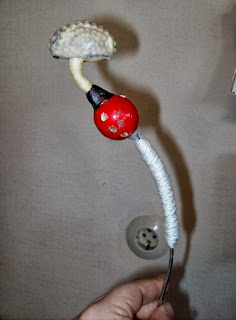 The "head" was then attached to this simple armature, consisting of thick aluminum wire and a wood ball, with holes drilled for attaching wings and legs. 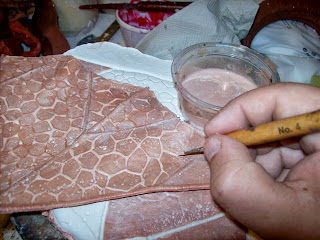 I won't go into the fabrication of the wings this time, since I've talked about it in length in other blog posts. I did try out something new here: Adding a webbed shape on the backside of each wing by dipping a pin tool in latex and "painting" with it. The other side of the wings already had the webbing etched into the plaster mould used to cast the wing membranes. 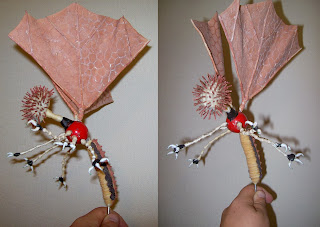 The legs were simply made by wrapping sewing string into shapes around aluminum wire. The "antannae" were thicker string dipped in latex and stuck on the head while still wet. 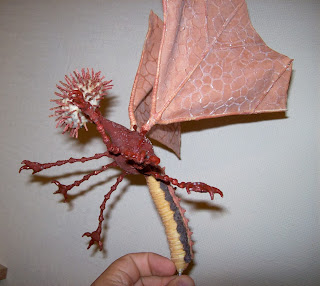 The wooden ball was covered with cotton dipped in latex. This mixture was prodded around with a pointy tool until a warty surface was achieved. Cast latex skins decorated the string-wrapped aluminum wire posterior. 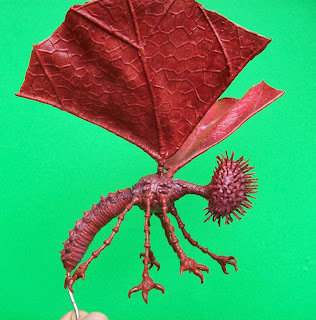 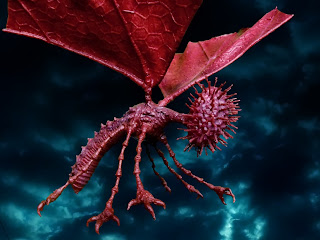 It's a pretty small puppet, but I'm quite happy with it. Eventually I'll make a bigger one, much better detailed. The Mi-Go pop up in several of Lovecraft's tales, and I'll get back to them eventually.

The short story "The Horror In the Museum" was ghostwritten by H. P. Lovecraft for Hazel Heald.; one of many "revisions" Lovecraft took upon him to get some money for basic survival. There are  several weird monsters mentioned in the story, but the main big bad is "Rhan-Tegoth". I sculpted its three-eyed head in clay, while the rest of the body was built up. 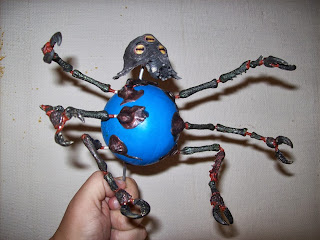 The limbs were sculpted out of Friendly Plastic thermoplastic while the material was cooling. One must work fast, as the plastic sets up in about a minute or less. I was walking home from a train ride one day, while pondering where to find a structure for the monster's round body. Suddenly I found a blue plastic ball lying by the road, just the right size! I punched a hole in the ball, and poured in plastic for roto-casting. When the plastic set up, it turned the ball rigid and durable. The limbs were attached with small screws to the body. 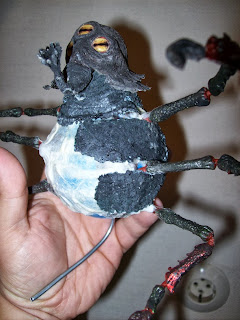 The body was then covered with a latex/cotton mix. This was mainly to get a rough surface onto which latex skins, cast from old moulds, could be stuck. 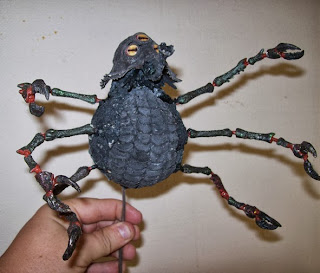 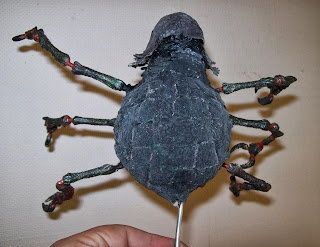 And although I never intended to show the back, I added some structure to that as well. 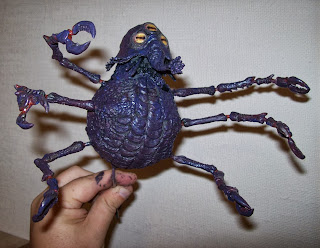 A PAX paint mix was used to the entire puppet. This mixture of ProsAide glue and acrylic paints is so durable I've been able to use it on both latex and plastic.
I've forgotten to say something about the eyes. They are Photoshopped image printouts covered by transparent plastic liquid used by scrapbookers to create dew drops and the like. I've found this to be a cheap and quick way to make good-looking eyes. Best of all is that you can decide the size of the eyes yourself. 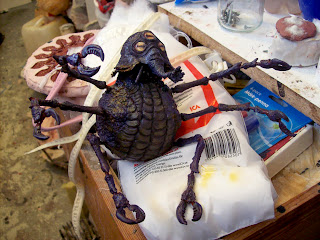 Finally the puppet was touched up with acrylic airbrush paint. Here he's resting on a bag of cotton, awaiting a more regal seating place. And here you also get a glimpse of how terribly cluttered and disorganized my workshop is. 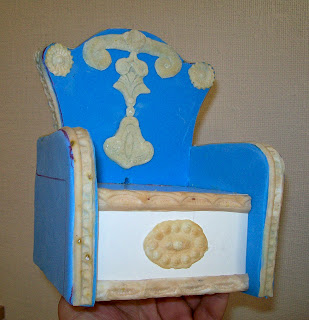 In the story, the alien monster is resting on an ivory throne. Not wishing to spend the time and money on  casting a resin prop, or using any similar method, I simply built up the throne out of the kind of soft plastic cushions campers use. Thick cardboard was used here and the, and decorations created with cast pieces of latex from old plaster moulds, created for various projects. The whole shebang was then painted with white PAX paint. 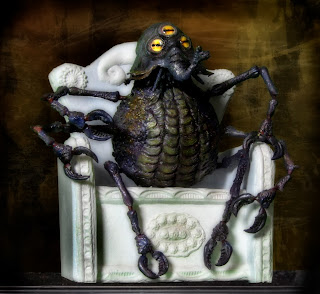 Rhan-Tegoth comfortably seated on his throne: "The thing squatted or was balanced on what appeared to be a clever reproduction of the monstrously carved throne. There was an almost globular torso, with six long, sinuous limbs terminating in crab-like claws. From the upper end a subsidiary globe bulged forward bubble-like; its triangle of three staring, fishy eyes, its foot-long and evidently flexible proboscis, and a distended lateral system analogous to gills, suggesting that it was a head."
Posted by Richard Svensson at 2:05 PM 14 comments: