The King Who Sought Immortality: Crocodogs and Scorpion Men

It's pityfully dour to think about how little you get done on your personal projects while having a day job. It's equally depressing thinking about how little the money you make from your day job, but that's a separate discussion. Take this madcap project as an example, my film "the King Who Sought Immortality". I've been at it for two years now, and though I'm finally seeing the light at the end of the tunnel, it's taken too long, or has it. The film's an experiment in what can be done creating a virtual world using only consumer market cameras and software, and no money at all. It can be done if you have the one vital currency: Time. 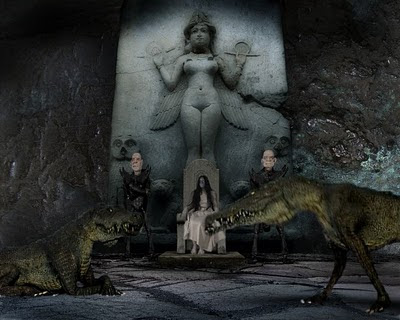 What I'm doing now is simply adding some icing on the cake; Extra details in backgrounds and extra monsters to spruce things up. The scene you can see a still from above is an example of this. The king of the story enters the Underworld to ask help from the queen of the dead. Two "scorpion men" are standing to attention on either side of her throne, and two crocodile/dog hybrids are loitering in front of her. There is nothing Ray Harryhausen about this -no monsters are fought or killed- except that the scene lives up to his idea about making characters out of your monsters. Rather it is inspired by the touches ILM made to the Star Wars and Ewok films they supplied the effects for. Life is visible everywhere in these films, be it strange desert creatures outside of Jabbas palace, or weird birds flying through some swamp or forest.It's all about making a world filled with wonders, a place different from ours. 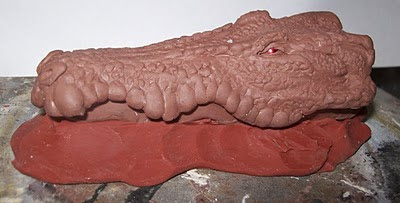 A quick walk-through on how the crocodogs were made. The upper and lower jaws were sculpted separately and cast in latex, reinforced with hard thermo plastic. 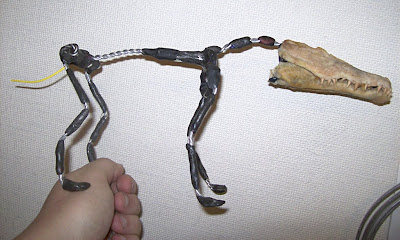 The head pieces were attached to an armature made of braided aluminum wire and thermo plastic (most US puppet makers seem to favour plumber's epoxy putty). 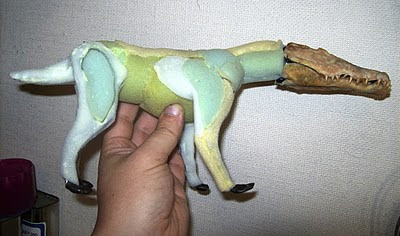 The armature was covered with layers of soft polyurethane muscles, glued on with contact cement. 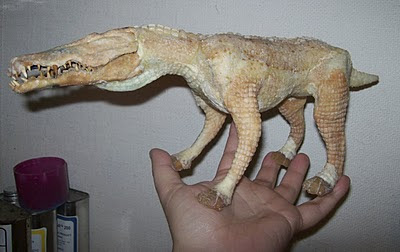 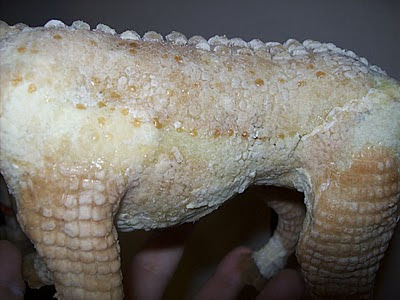 And on top of that layers of scaly latex skin, cast from a plaster skin mold, were added. 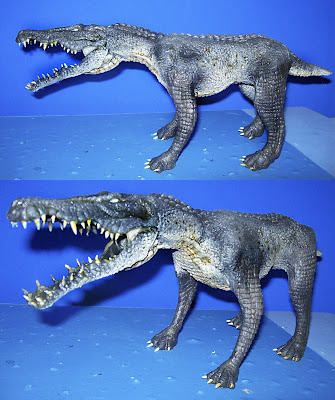 The finished crocodog (there's only one, but filmed twice) was painted with tinted latex, diluted with water. Acrylic airbrush paints added the final details. This was actually the first time I animated a walking four-legged creature. It took two attempts to get it right. The first time around, the animator part of my brain just didn't click. 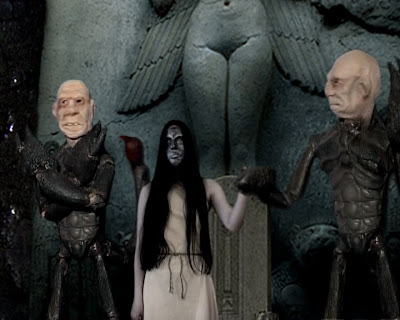 I made the crocodogs simply because I liked the idea. They seemed like something that appears in ancient myths, although I haven't really found anything resembling them in ancient art. They might also fit nicely into a Conan sword & sorcery yarn. The scorpion men do exist in Sumerian myth and play quite an important role. The "king" film is a hodgepodge of ideas stolen from mainly the Sumerian myths, and I had to have some scorpion men.

In the actual myths, they are rather strange hybrids; Winged, bearded men with bird's feet and a scorpion's tale, brandishing bows and arrows. Among other things, they guard the gateway to the Underworld, a concept which I used for this film. Making a puppet of these strange creatures were tempting, but I had a different idea. While reading about the scorpion men I thought about comic book artist Basil Wolverton's strange and uncomfortable insect/human hybrids, which pop up in his sci-fi and horror tales. I thought that would be a great deal more disturbing to see.

I needed four different scorpion guys, but the only real difference between them would be the look on their faces. So I did something I've never tried before (but will do again): I made one carefully detailed puppet body, with four interchangeable heads. The heads were molded in latex and had aluminum wire mouth armatures. Their necks were simply sawed-off marker pens, with a cork fitted between the shoulders of the puppet body. This may seem like a terribly cheapskate arrangement, but it was, in fact, a very good solution. You know how a thick marker pen pops into its cork and stays there. I could still twist the heads around, and a small joint in the head allowed it to tilt forwards and backwards. 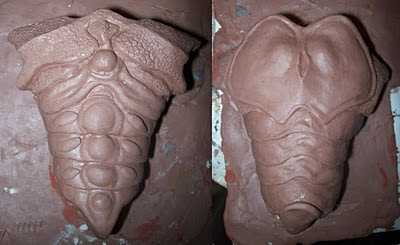 The body was made of two parts, a front and a back side shell. All the body parts were cast in latex, simply because plastic body parts put a greater deal of stress on the aluminum joints. I've made one puppet with rigid body parts, and the joints kept snapping repeatedly! 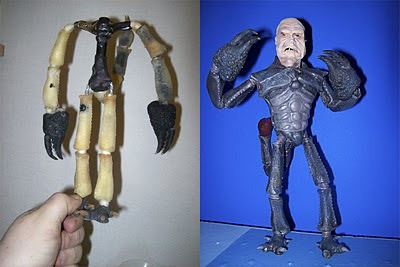 The armature was the usual mix of aluminum wire and thermo plastic. The latex body parts were glued together around the armature. I wanted the bald human heads to be bizarrely distinct from the rest of the body (Wolverton-style), but I still toned the rosy human hue down in editing to a paler one. 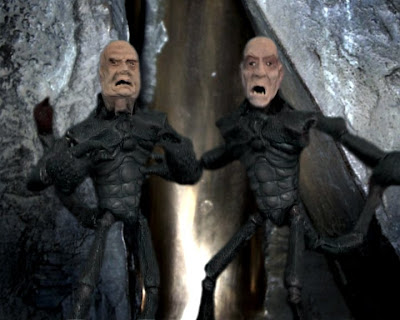 Posted by Richard Svensson at 8:44 AM 12 comments:

What is Your Work Worth?

This summer I made quite a lot of stuff for Castle Kalmar, which is a stately 16th century fortress (begun in the 12th century). It's one of the big tourist attractions in the south of Sweden and all sorts of arrangements for kids are going on there. This summer they needed some new stuff, which they wanted me to produce for them. Here's some of the stuff I did: 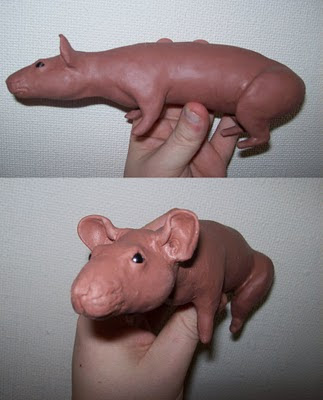 They needed about ten fake rats to be handled by storytellers dressed up as "forgotten prisoners" in the castle's dungeons. As always, they were first sculpted in clay.

They were then cast in latex, filled with soft polyurethane foam and had jointed feet and black button eyes added. The tail was also made in latex. Unfortunately, I don't have any photos of them with fur added, but they were actually quite effective when used. A costume-making lady at the castle did the fur-adding job. 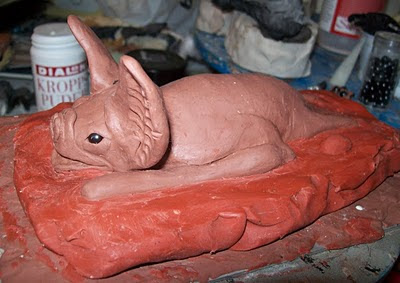 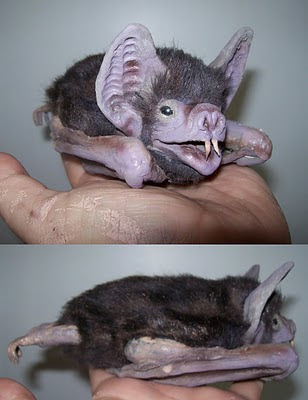 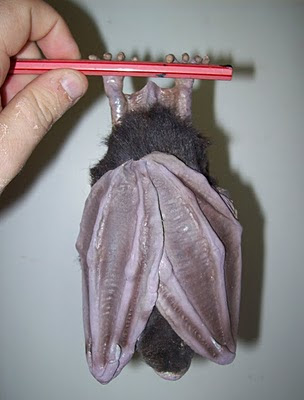 I did eight fake bats in the same way, though I added the fur myself. The toes worked as small grappling hooks, so the bats could be hanged around the castle. 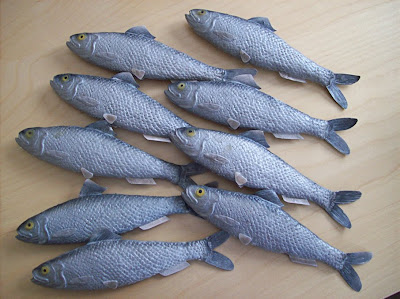 They also needed a bunch of fake herrings that could lie in a wooden barrel all summer without going smelly. The fake herrings were foam-filled latex fish. 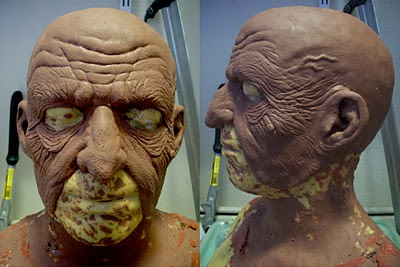 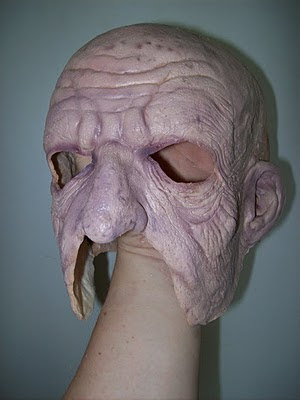 I also made a latex character mask for one of the storytellers telling ghost tales about the castle. 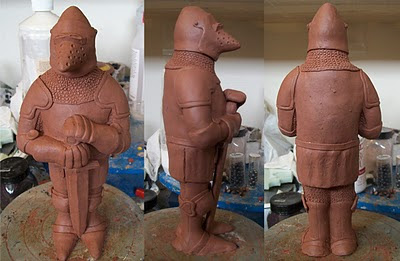 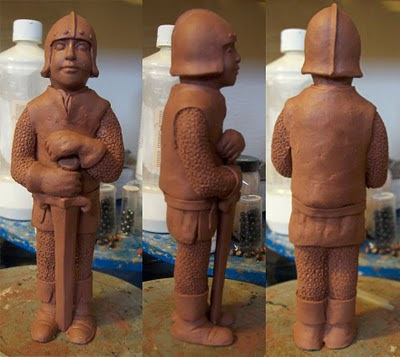 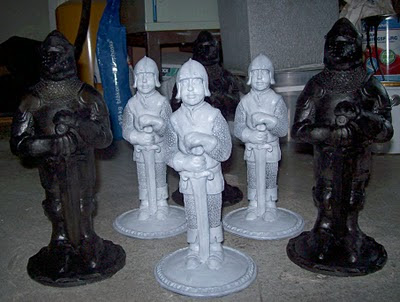 The nicest thing I did was probably an oversized version of "Five in a Row", using only three pieces per player. Kids could challenge the black knight of the castle to a game of wits. The knight used the black pieces and the kids the smaller white ones. The game pieces were cast in plastic and reinforced with metal bars inside.

Apart from the aforementioned stuff I also made three decapitated heads, with hair, and a bunch of rubber swords. At the beginning of my dealings with the castle, I was only supposed to do the rats and the swords, but as summer went along the crew at the castle came up with more and more stuff. However, I soon realized they didn't have that much money to spend. The things I made for them eventually wound up costing $700, which is not much to begin with. I don't have a registered company, which means that when I do work for, say, a stage show I get paid by buying stuff for the amount I've quoted for doing the job. The stage people take care of the bills and everybody's happy. This time the castle wanted to pay me and needed a proper company to go through. I contacted a billing company to take care of the business. It's run by a friend's friend and they charge 6% of the payment for their services. But after all the taxes and fees that you have to pay in Sweden for running a company were finally paid, I only ended up with $240. This has deterred me forever from doing more of the same work. This is what it's like having your own business in Sweden, ladies and gents. I've never been very interested in politics, but the more work I get, the more I see how much a part of business-making politics is. For a few decades the Social Democratic Labour Party has been in power in Sweden, and they simply don't like small businesses. They rather have workers lined up inside factories and weighed the solitary business-owners down with loads of costly taxes. The last four years the Swedish government has consisted of a coalition of four centre-right, liberal conservative political parties, which have done whatever they can to lighten up things for the small-time business-maker. And things have brightened up a bit. It's actually election day today in Sweden, and I hope they get another four years. Maybe I'll get enough guts to start my own official business eventually.
Posted by Richard Svensson at 8:59 AM 4 comments: