Welcome again to the wacky world of H P Lovecraft! This time I've tackled a real classic, his early and game-changing tale "Dagon". You could say that this short story defines most of his work that comes after it. It introduces that most parodied Lovecraftian cliche: the narrator who keeps writing down what happens up to and including his own demise, death screams and all. 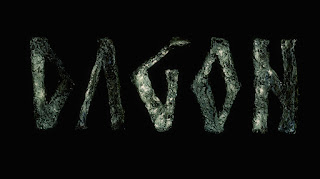 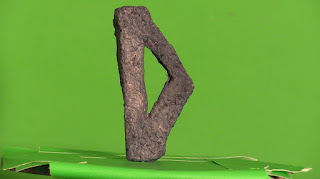 Let's start with the title. Since monolithic imagery is such an important part of this story I decided to expand this theme to the titles. I sculpted the letters of the name "Dagon" in clay and cast a plaster mold around them. This allowed me to cast extremely light weight versions of the letters in latex, reinforced with cotton, and then paint them with a mix of latex and various tinting mediums. The letters were placed on a green screened turntable and then filmed one by one. The separate letters were then lined up against a black background in After Effects and synchronized to turn all together. 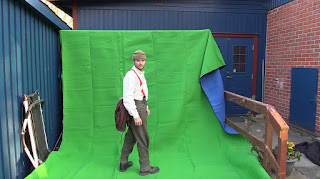 The story takes place at the beginning of WW1, and I decided to try and stick with that period. I think I managed to scrape by just about when trying to maintain the credibility. I recruited my stalwart filming buddy Martin Merkel to play the narrator. It was a no-brainer to engage him in the project since he, besides being ever reliable, also had a decent collection of costumes and props from the WW1 era, coming mostly out of his cosplaying and historical reenactment interests. I filmed all of Martin's scenes outdoors against a green screen. Well, almost all, because I needed some shots of him walking at a distance, and my screens weren't big enough to handle that. 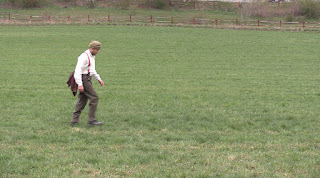 To get those shots we found a slope of short grass, and Martin simply walked in front of it. 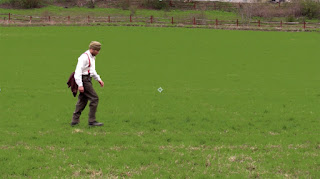 This may look primitive, but with the aid of an AE plug-in called Smooth Screen I could transform the grass into a more unified green background. This allowed me to pull Martin out of the green as with any ordinary green screen shot. 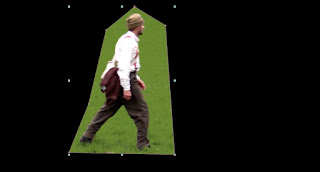 But to get rid of most of the background I also had to draw a "garbage matte" around him, and changing the shape via keyframes I could track his walk with a minimum of background showing. 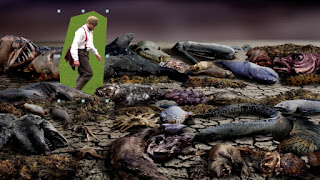 Martin was then sandwiched in between two Photoshopped background images, allowing him to walk into the rather nauseous landscape of the dry ocean floor. 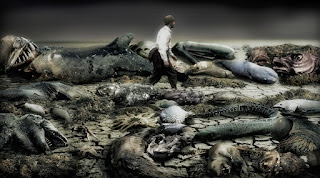 Lastly, the green around him was removed, and the rendered shot was treated with atmospheric filter effects and then rendered out again. 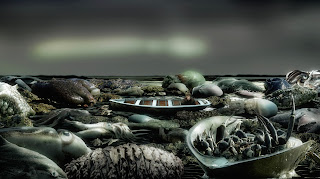 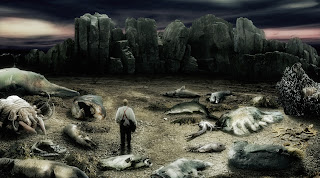 These backgrounds were all created in Photoshop using photos of ebb and tide beaches combined with hundreds of images of stranded sea creatures. Sometimes, like in the top image, I've added a tracking camera move to add some depth, creating a 3D effect with artificial means. 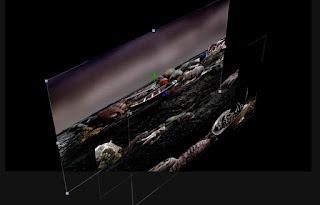 It's done rather simply by marking all the layers of the shot as 3D layers, and then adding a distance between each layer. Depending on how big that distance is, the perspective effect is more or less accentuated when a camera move is animated in the shot. It's kind of crude, but it certainly helps sell the illusion if you do it well enough.

The monolith of this story is a very famous Lovecraftian artifact, which needed all my attention. But at the same time it's impossible to create the definite version of such a thing, so I just went with trying to literally recreate what the text says about the artifact. It has peculiar carvings depicting humanoid monsters that look like a cross between a fish and a frog. One of them is battling a whale. So that's what I went with. The images are depicted as bas reliefs, which meant they had to protrude out from the stone surface; a tricky bit of time consuming sculpting. I wasn't up for that, so I used a technique from my early days of prop-making. Instead I carved out the details, in reverse, so to speak, on a flat clay surface. 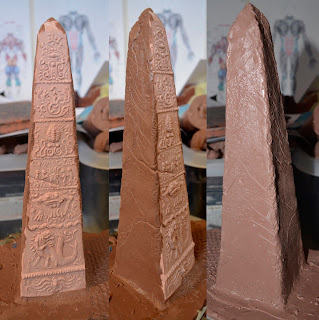 When I poured hard dental plaster onto this surface, the dry plaster cast revealed just the kind of bas relief I wanted. Again, crude but effective. This plaster cast was joined with three clay walls to create the actual monolith. Over this I applied four layers of DragonSkinFX silicone to shape a flexible mold. 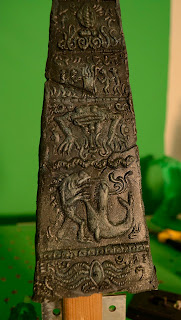 SmoothCast 325 was poured into the silicone mold and roto casted to create a hollow plastic copy of the monolith sculpture. This casting was painted with washes of bronze, blue and green acrylic paint, and the whole thing was attached to a rudimentary but sturdy wooden stand. 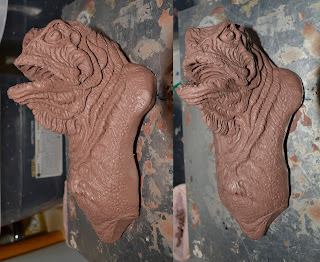 The Dagon monster hugging the monolith was a foot tall puppet, built with my usual materials and techniques. I started off with a head and torso sculpture in medium grade Monster Clay. Like the monolith, this creature has achieved mythic proportions and there's a ton of art out there depicting it. How to make a version that's wholly original and yet familiar enough? The only way was to make it look like I think it should look, which is probably a distillation of loads of images from other artists, as well of real world fish and amphibians. 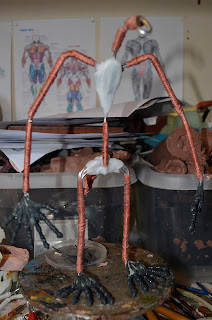 The armature was very simple; aluminum wires held together with thermoplastic, and reinforced with bits of metal rods to make the hard parts of the "skeleton." 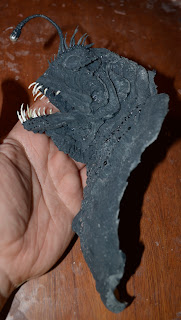 The head and torso was cast in tinted latex from a plaster mold built up around the sculpture. An aluminum wire angler fish rod was added, along with fangs made from yarn dipped in latex. 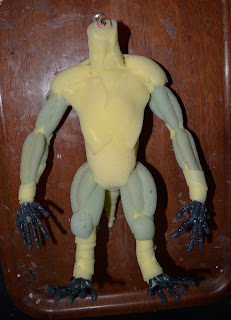 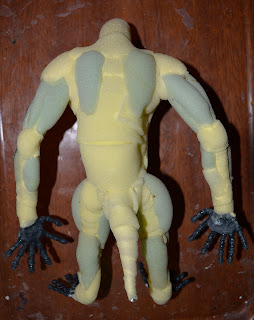 Very soft polyurethane foam (the yellow bits) was mixed with denser foam (the green bits) to create a muscle padding, which was then covered with scaly patches of latex skin. 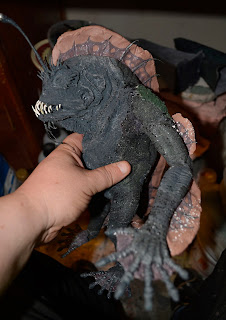 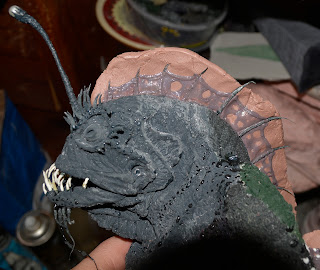 I wanted the monster to have fin-like outgrowths that looked worn, befitting an ancient sea giant. After attaching spikes made from cotton and latex to parts of the puppet, soft Monster Clay was pressed up against these spikes and tinted latex was brushed over both spikes and clay. When the latex had set, I had achieved that look of worn skin that I wanted. 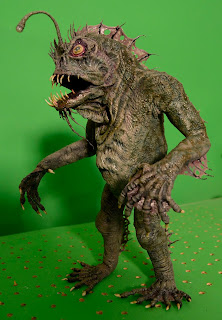 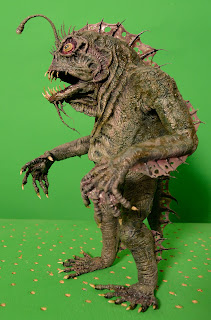 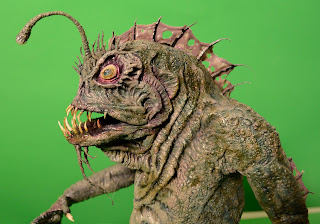 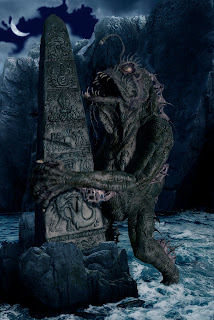 The finished puppet was painted with acrylic airbrush paints, including the eyes, which were then covered by Glossy Accents scrap booking plastic to create that deep sea fish look to the eye lenses. The angler outgrowth has a glass pearl at its end. 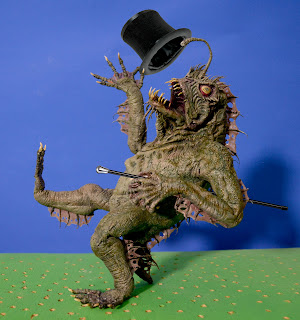 That's all folks! My take on Dagon has been generally well received, though there have been a few angry people letting me know what they think of this mangled version of one of their favorite tales. But that's how it goes. The more famous the tale you adapt, the more criticism you'll get.
Posted by Richard Svensson at 7:18 AM 3 comments: