The Dweller In the Hills

Nobody can accuse "The Dweller In the Hills" to be great poetry, but it has a certain flavor that I like. I tried to create a visual esthetic that went with it. But before we get into that, here's a little bit about the guy who wrote this. 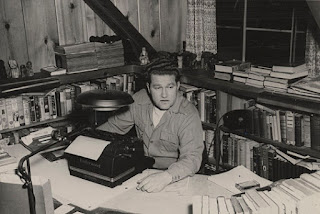 August D Derleth is the foremost of H P Lovecraft's disciples, the group of young writers he encouraged and communicated with. Derleth's devotion was such that after Lovecraft's death he and a couple other writers formed Arkham House, a publishing venture with the sole purpose of collecting the works of Lovecraft, which was spread in various pulp and amateur press magazines. Eventually, other authors, like Derleth himself, were also published by Arkham House.
Derleth was a prolific writer for the pulps, both with prose and poetry. "The Dweller In the Hills" is probably a good example of his slightly unpolished style. 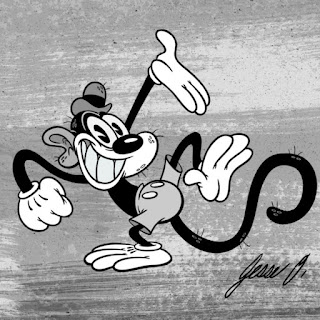 I felt that this poem, which is now in the public domain, could be adapted as a fun short horror film with a distinct style. I chose to try to emulate the style of "rubber hose" animation when creating the dweller himself. Rubber hose animation refers to an early style of animated character, including the earliest incarnations of Mickey Mouse, where the limbs seem to be boneless and hose-like. It's a very retro style and lends itself to crazy and sometimes unsettling characters (at least to our modern sensibilities.)
I also looked at artists like Big Daddy Roth, EC Comics artist "Ghastly" Graham Ingels, and Weird Tales´ Lee Brown Coye for inspiration. 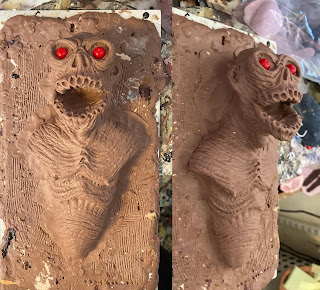 So, this is how the character ended up as a clay sculpture; cartoony and grotesque. 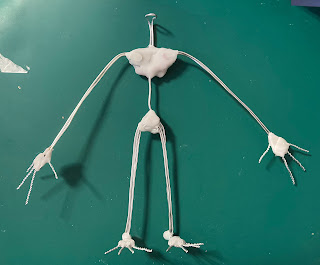 The armature was super simple since I was going with the rubber hose aesthetic. The head isn't included here, but a single wire controls the jaw, and that's it. 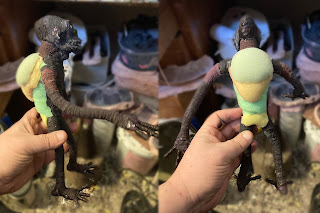 I used a wrapping of soft yarn to cover up the arms and legs. The sculpted torse was recreated in latex rubber from a dental plaster mold. Some very simple foam padding filled out the body. 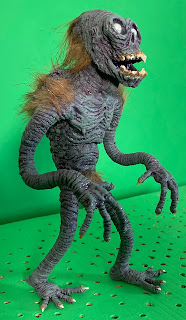 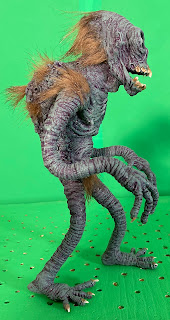 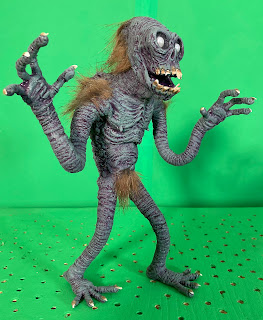 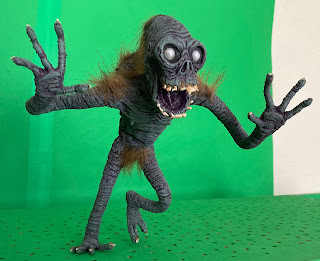 I added a couple of mother-of-pearl white plastic half-spheres as eyes to get a creepy effect. The teeth and nails are tissue paper dipped in latex and shaped with a set of small scissors. The hair is fake fur. The whole puppet was dry brushed with tinted latex. 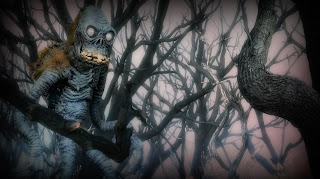 I also applied various filters in After Effects to get a faded retro look. It's a style I'd like to explore in another project. In all of the shots featuring the character, the dweller is sandwiched in between laters of trees cut out in Photoshop. It's a bit of finicky work, but the results are worth it. 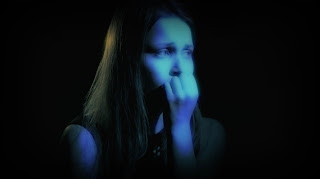 There is a bunch of people in this video, reacting to the nightly noises of the dweller. they're all stock footage clips, downloaded from Videoblocks.com. Like my old inspiration and patron saint, Ed Wood, I'm getting pretty good at storytelling with stock video clips, methinks. 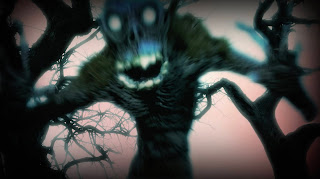 I'm not a massive fan of August Derleth, but if I come across something that tickles my fancy in the public domain, I'll give him another go. I will, however, do another project where I can explore the rubber hose retro style to hopefully both unsettling and entertaining effect.
Posted by Richard Svensson at 2:48 PM 1 comment: