Darmok and Jalad: The Beast

2016 was the 50th anniversary of the first Star Trek episode broadcast, but I seemed to keep myself too busy to make something fun out of it, contributing to the celebration. However, I had for years planned to make my very own Trek fan production. I am a dedicated Trekkie, or Trekker -whatever you prefer to call it. 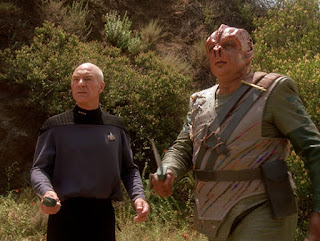 One of my favorite Star Trek episodes ever is the Next Generation story "Darmok", about the starship Enterprise encountering and trying to communicate with an alien race speaking only in metaphors. Within this story is the tale of Darmok and Jalad, two strangers who become friends when they have to join forces to defeat a common enemy -the Beast of Tanagra. A few years ago I found a YouTube video of a guy named Oliver Mains, aka Tachyon Beam, performing a very Dylanesque song retelling the myth of Darmok and Jalad, and I thought it was both clever and catchy.


I quickly received permission from Oliver to use his song in a video project, but time passed and I was busy with lots of other projects. However, a couple of months ago I decided to pick up the threads and get on with the film. I contacted Oliver again, who provided me with a better recording of the song, which you can now find on iTunes. 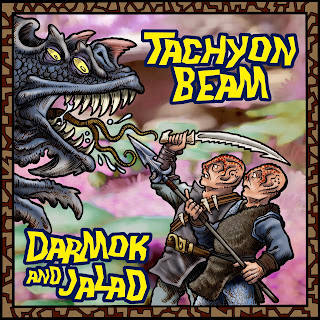 I contributed an illustration for the song, and if I'm not mistaken there might be more collaborations of this kind further down the road. 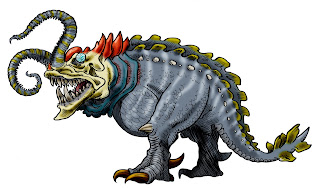 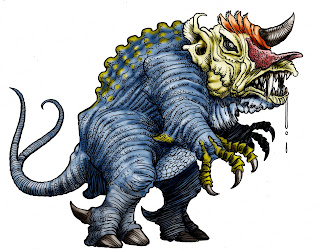 I decided to make this video all-puppet, with my usual brand of Photoshopped backgrounds. Starting off I focused on the Beast of the story, and went through a bunch of designs. In the end I went with none of them, but incorporated certain elements that stuck through the various ideas I had about the creature. 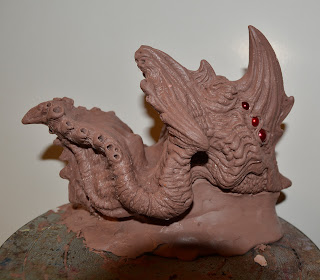 I started sculpting virtually with no idea of how the end design would end up, except for it being big and scary. So a huge mouth into which I could stick lots of teeth seemed like a good idea, as well as pointy things and spidery eyes. In the end, what I wanted was a representation of brutality and horror that would be worthy of a mythical monster. At the same time I wanted to honor the many excellent creature designs we've seen on the various incarnations of Star Trek through the years. My sculpting material here was Monster Clay medium grade. The eyes are scrapbooking beads, which I've used for lots of my puppets by now. 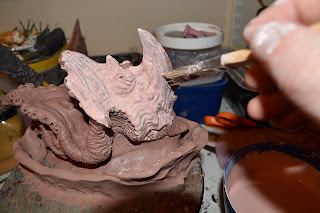 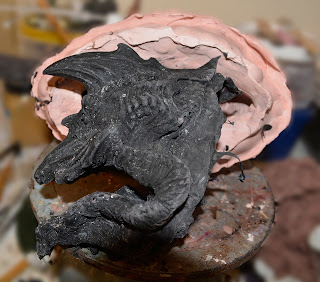 The mold for this sculpture was made in one piece from dental plaster. I cast a thick skin out of tinted latex into the mold, though not so thick that the skin wasn't perfectly flexible. 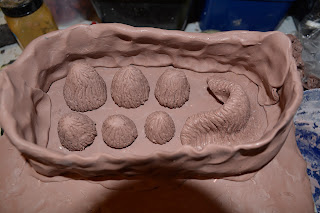 I decided to make crustacean-like segmented arms for the monster, and sculpted the segments and a shoulder section in Monster Clay. 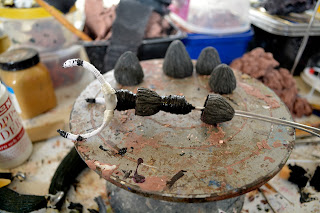 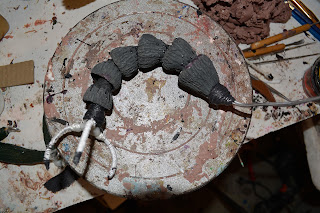 The arm segments were cast in latex reinforced with cotton dipped in latex, and threaded onto a bundle of aluminum wires that also made up the three-pronged claw. 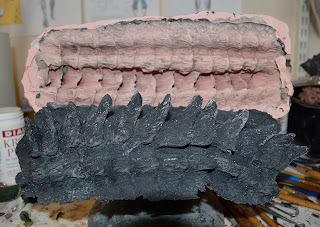 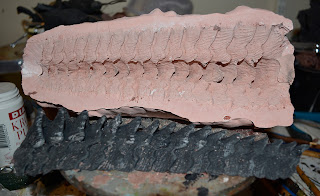 I also sculpted and cast a back and tail section continuing the bug / crustacean theme. Again these latex skins are just thick enough to hold their shapes, but perfectly flexible too. 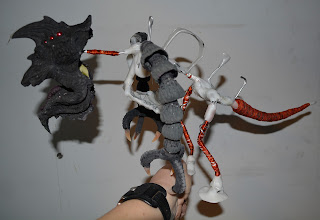 The armature was my usual aluminum wires concoction, held together with Polymorph thermo plastic. You can see some wire extensions which were eventually covered with plastic. They're there to help build up bulk on the puppet while providing stability when I grab onto the puppet while animating. 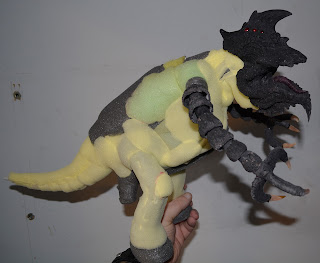 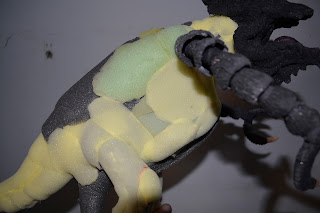 The body was covered with a build up of layers of thin polyurethane foam. The torso is actually filled with cotton balls, and not foam. This helps keep the puppet as light weight as possible. 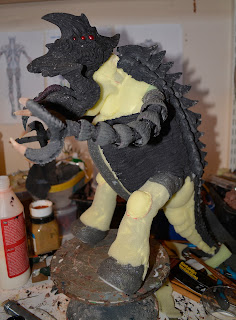 I have a bunch of older skin texture molds in dental and gypsum plaster that I can always rely on for interesting and detailed skin casts. I'm using liquid latex to bond them to the foam. The scaly back and tail pieces are also joined in this way. 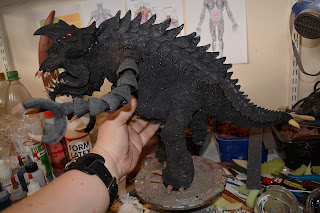 The teeth are cotton dipped in latex and rolled between my fingers into pointy shapes. The claws on hands and feet and the tail horns are latex cast into plaster molds for big pointy teeth. I re-use those molds over and over again too. When all the patches of scaly latex skin are in place I cover up the seams with more tinted latex and a pointy sculpting tool. I also use this tool for placing drops of latex here and there in order to connect the various textures. 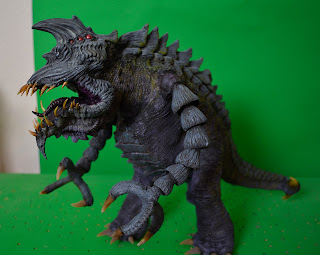 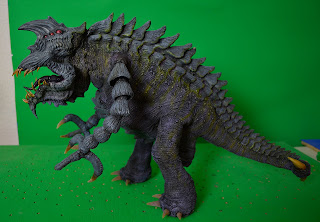 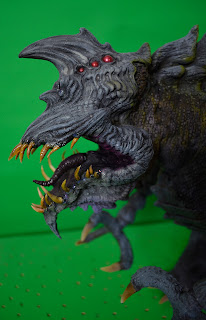 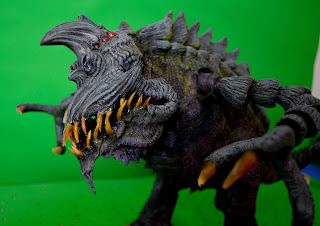 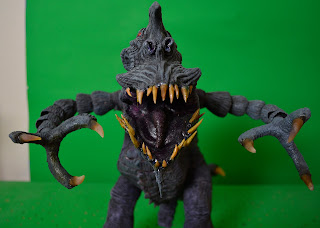 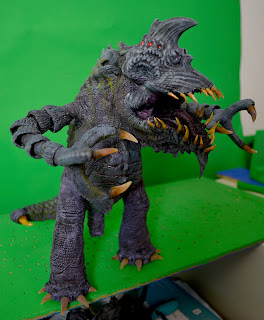 The finished Beast is painted with a mix of ProsAide cosmetic glue and acrylic paint. Finishing touches are made with acrylic airbrush paints. I forgot to say that I also added a tongue that can be animated, and that the feet have extra big threaded bolts for tie-downs during animation. This puppet turned out to be a big bugger, exactly 50 cm from nose to tail, so he needs all the support he can get to stand up while being animated. Though not being very heavy, the puppet is clumsy. But I wanted it to look huge when compared to the Darmok and Jalad puppets I'm also working on, and the Beast will be able to grab them, and look intimidating at this scale.

I'm not a huge enthusiast when it comes to fan films, but I'm approaching the Star Trek-verse in a way that I don't think has been done before. Anyway, I'm enjoying myself, and that's the only excuse I need. More to come on this project very soon!
Posted by Richard Svensson at 1:59 PM No comments: