It seems I will be lending my time and talents to quite a few projects during 2015. I have lots and lots of stuff I want to do myself, not to mention stuff that needs to be finished, but I thrive on collaborations, especially where several talents are involved and each contribute to a piece of the creative puzzle.
Here's one of those collaborative projects: The video-horror-musical "The Dreams in the Witchhouse", based on the rather good tale by H P Lovecraft. The mastermind behind the film is Brian O'Connel, who apparently acquired the rights to the music from the Lovecraftian rock opera of the same name.
This time I'm not designing the stop-motion beasties, I'm building puppets based on drawings from DeviantArt artist KingOvRats. 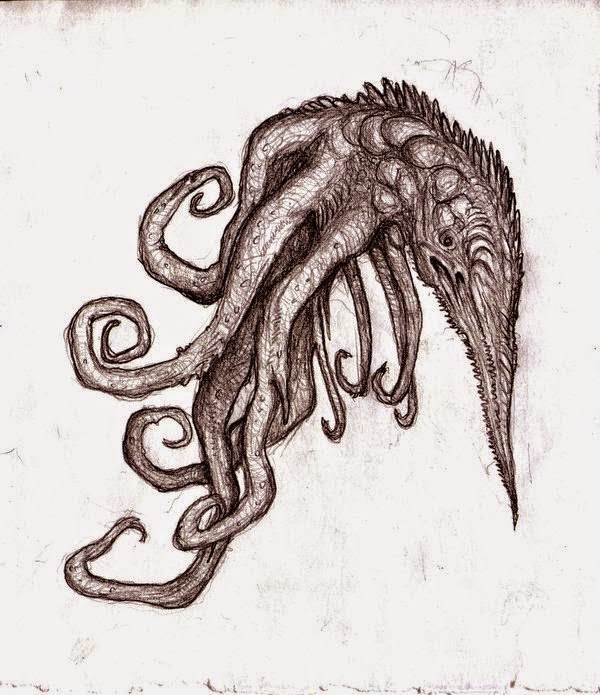 This octopoid creature will be one of several monsters floating around in a parallel dimension, which the "hero" Walter Gilman" visits in a hallucinatory experience. I decided to make the puppet rather big, and started with a head sculpture in Monster Clay. Details like the saw-toothed edges on the monsters beak/snout and the crest of spines were added later. 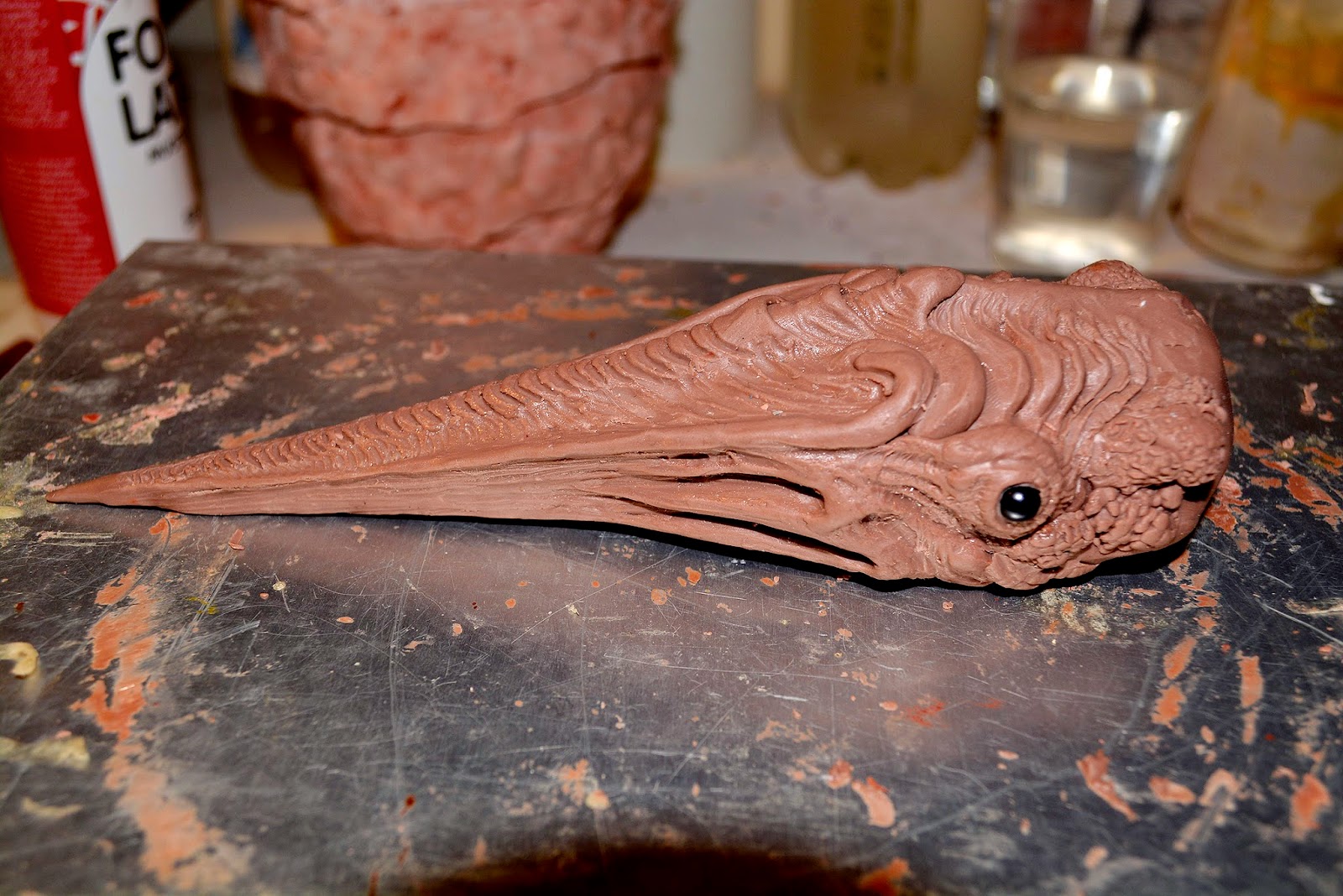 Most of the puppet was actually built up in a rather improvised way, which I don't do very often. The head was such an important feature, though, that I felt that had to be made as exact as I could replicate it from the design drawing. 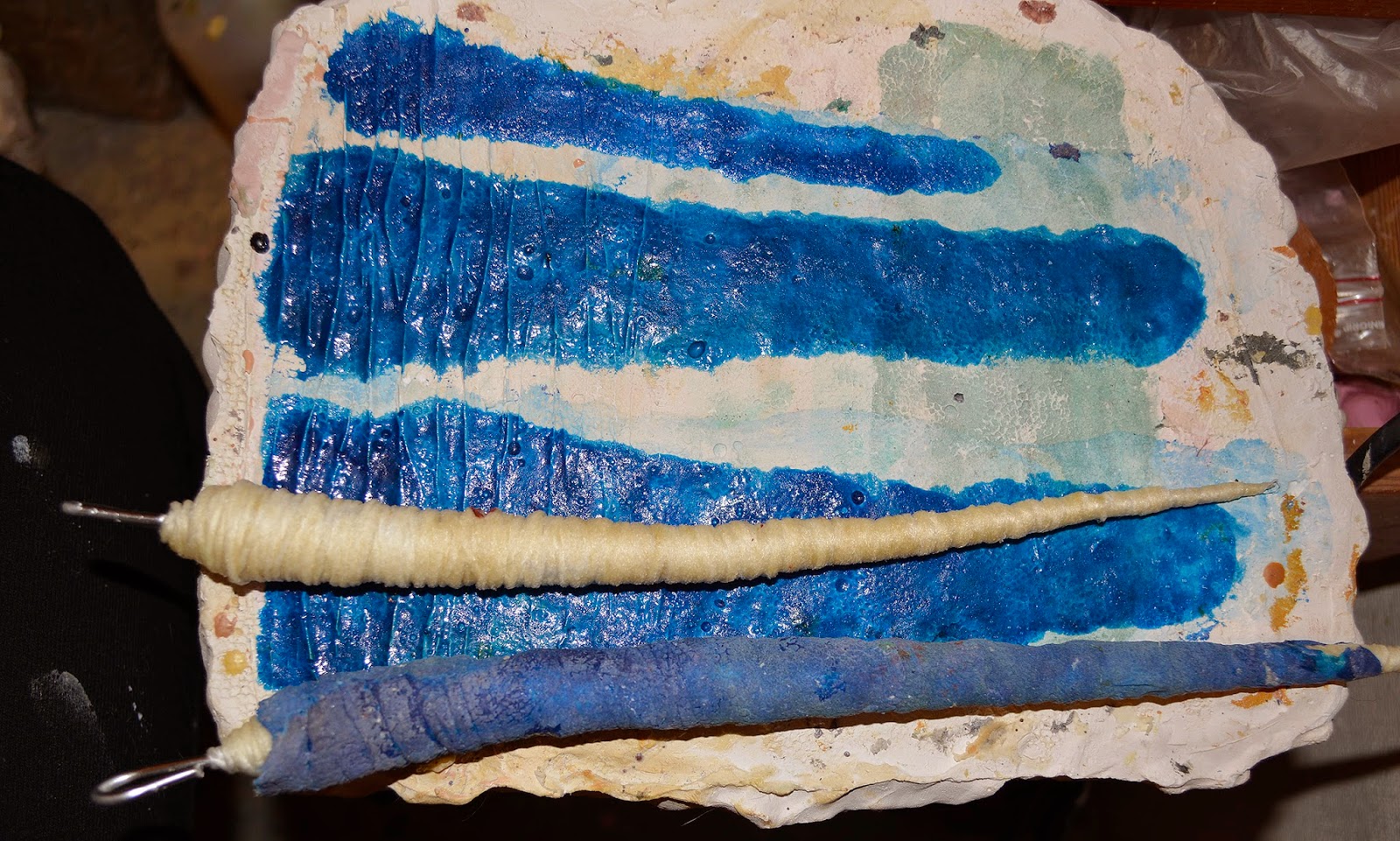 To create the tentacles, aluminum wires covered with soft string were dipped in liquid latex, and casts of wrinkled and textured latex skin pieces were stuck on as a covering. 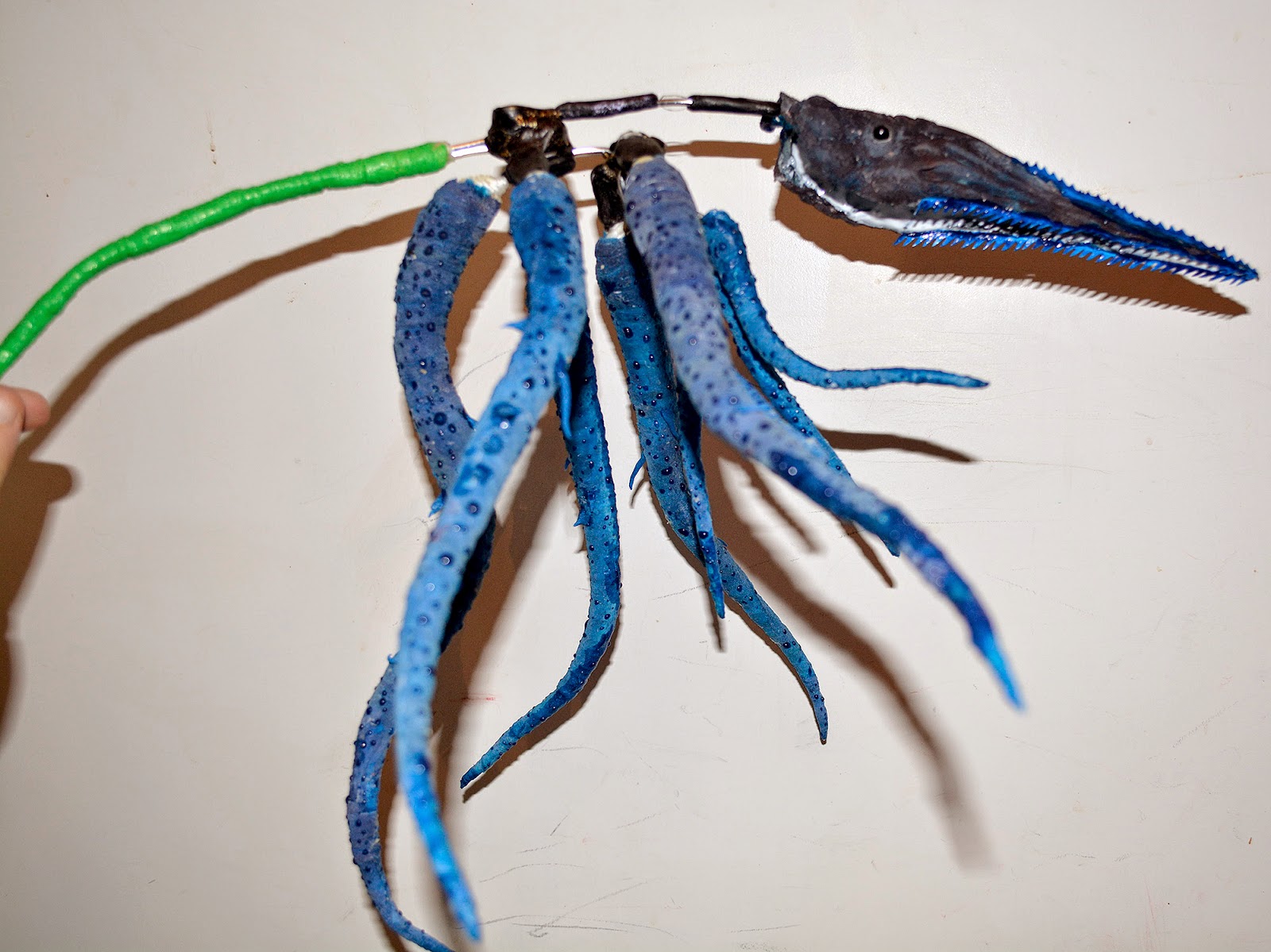 The spine was another bit of thick aluminum wire, covered with Friendly Plastic thermoplastic to simulate unbending bony parts. As you can see, the creature will eventually be quite blue. The green support rod at the rear part is detachable, and will only be used when animating the puppet against a green screen. The saw teeth have now been attached, and are simply made by cutting out the shapes in paper, and then covering them with tinted latex. 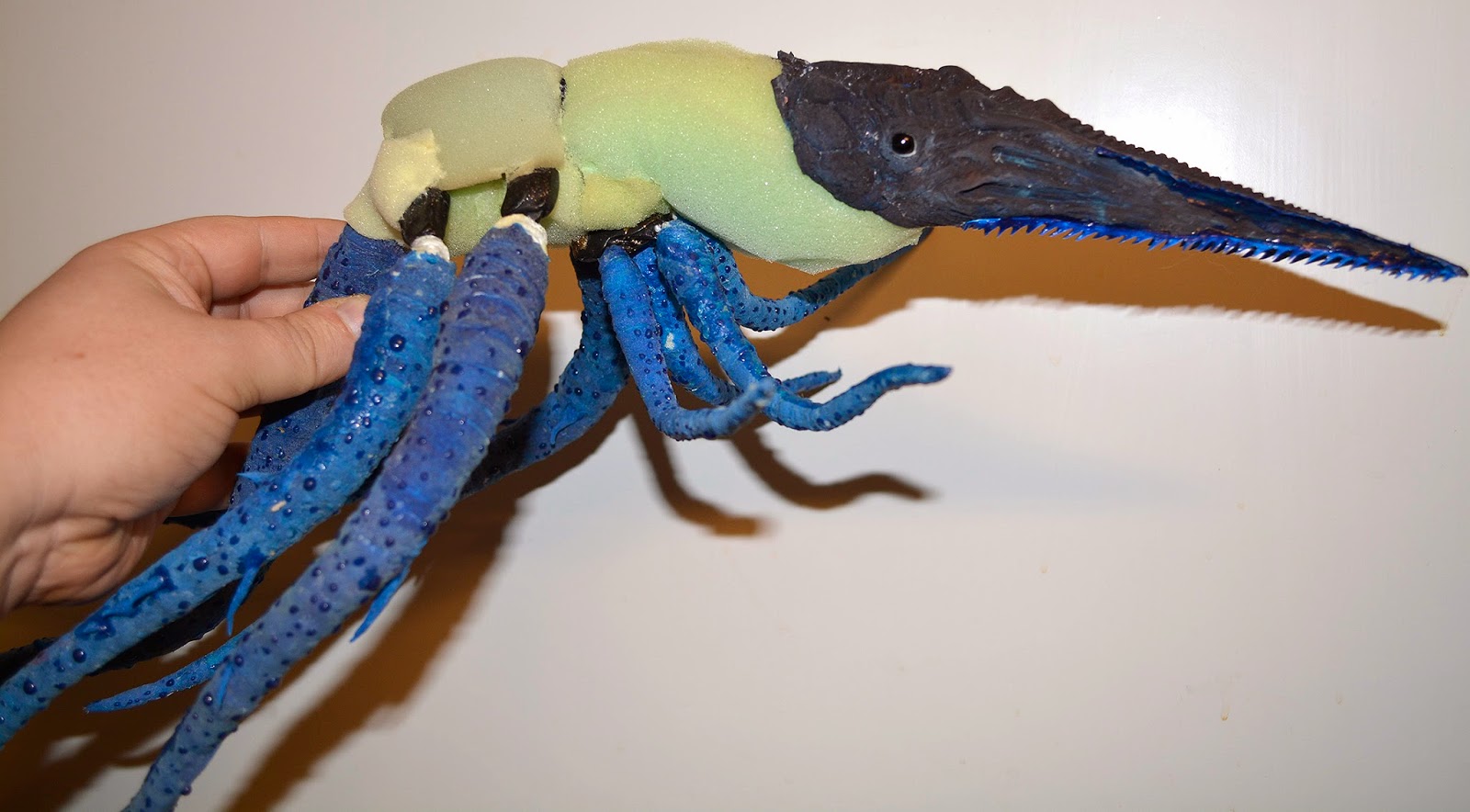 The body was built up with simple foam padding, augmented with thick layers of cotton held in place with a thin cover of liquid latex. 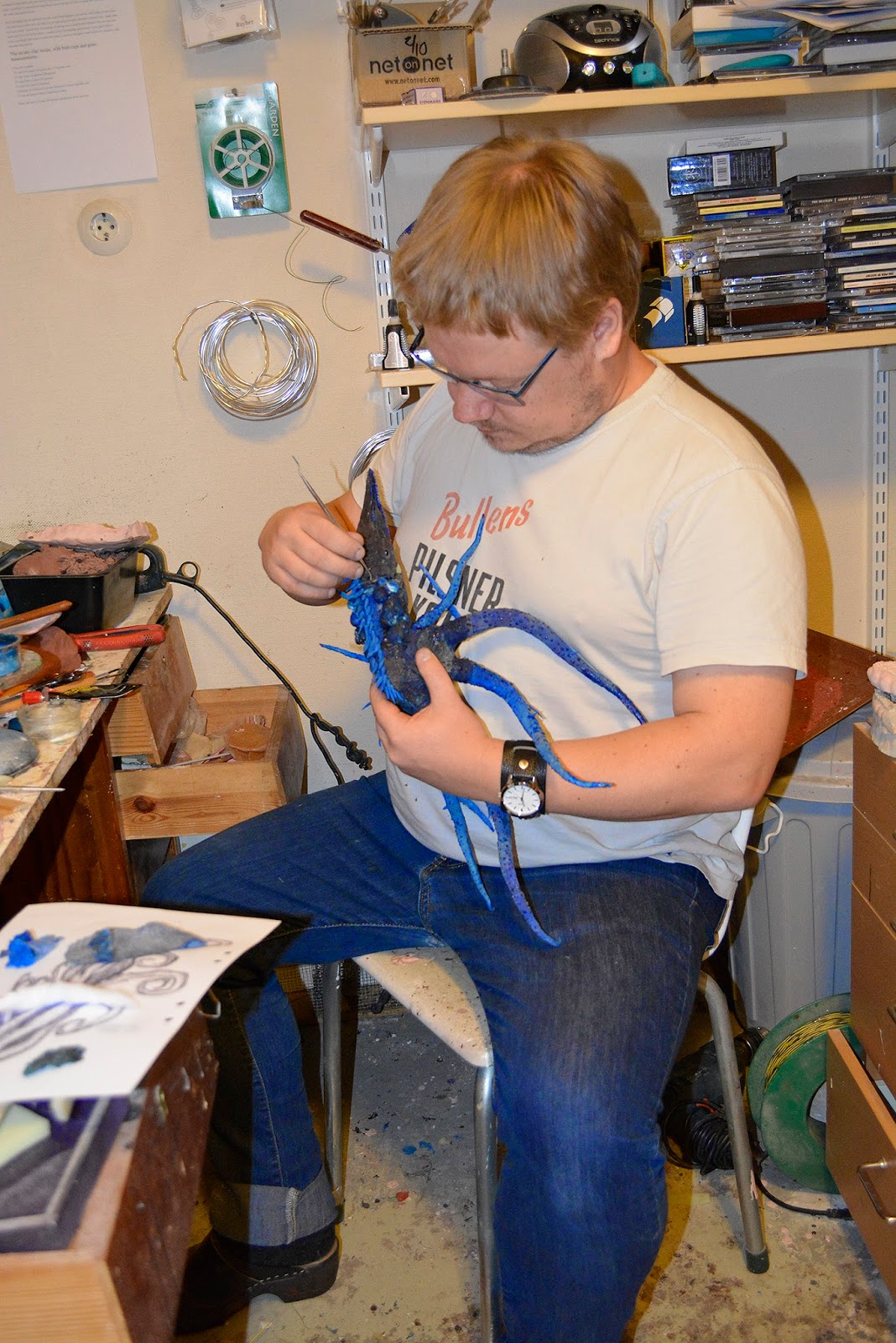 The skin on the body was created by casting multiple smaller patches of latex from many old plaster moulds. Additional texture were created by simply dipping pointy dental tools in blue-tinted latex and dripping warts and small wrinkles onto the skin. The spines on the crest were created by mixing latex and cabosil to a butter-like paste, and rolling the goop into pointy shapes between my thumb and index finger. 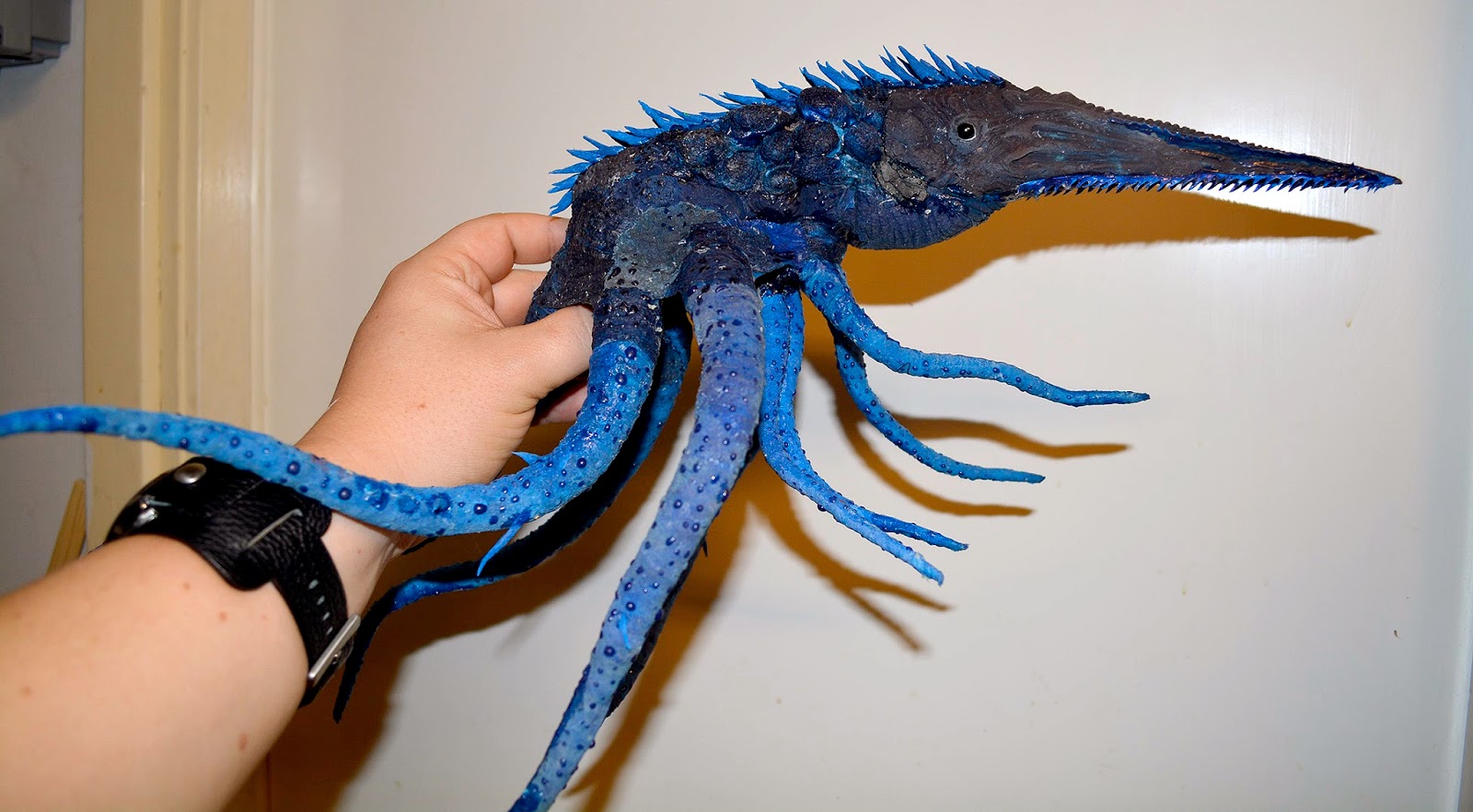 The puppet is now ready for it's final touch up, which is a coat of tinted PAX paint (Pros-aide glue + acrylic paint), and finer detailing with acrylic airbrush paints. This was a fairly simple puppet to build. For example, it didn't need any complicated head joints for jaw or brow movement. The lack of joints also makes it very light for a puppet of its size, which is a little over a foot long. 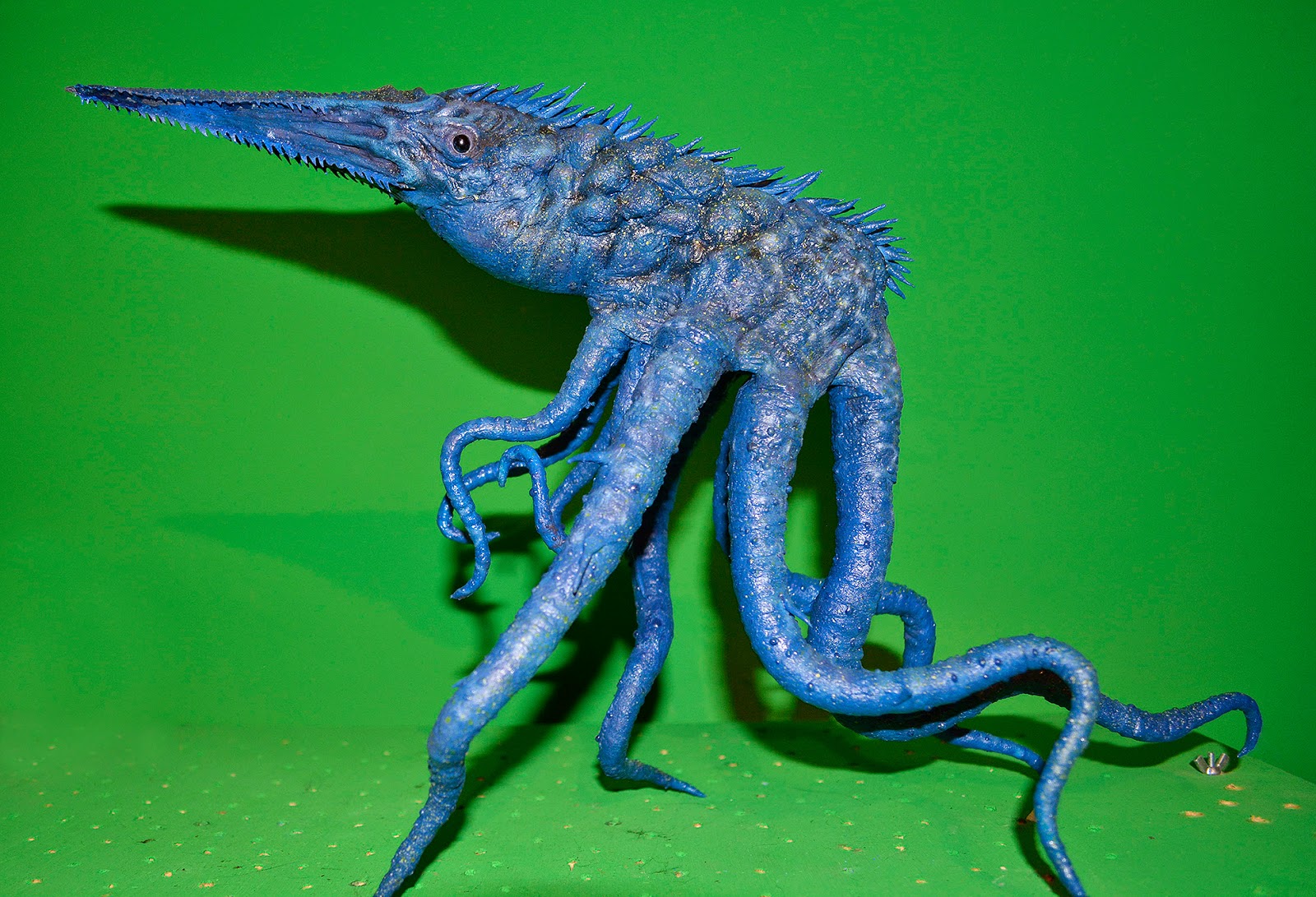 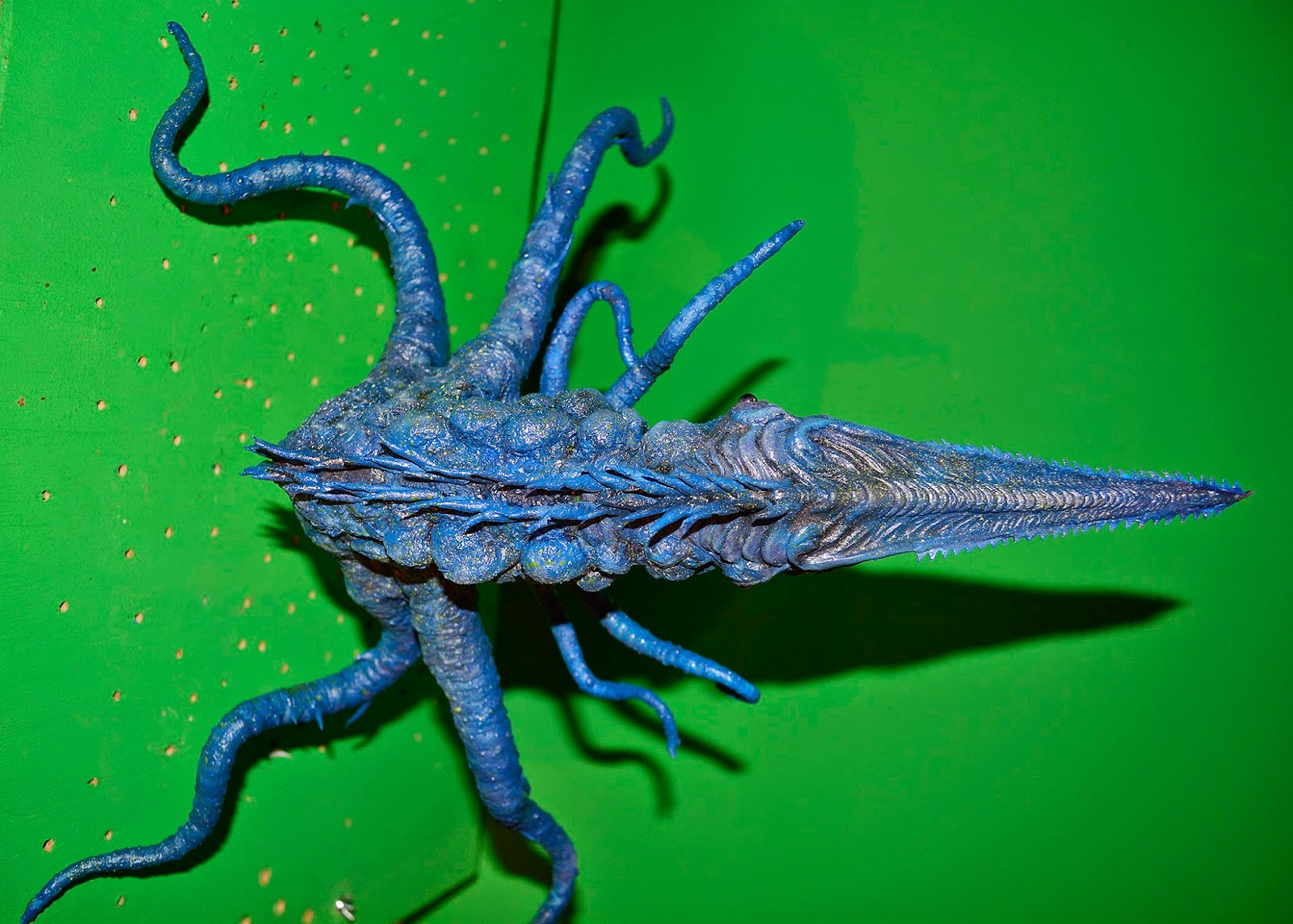 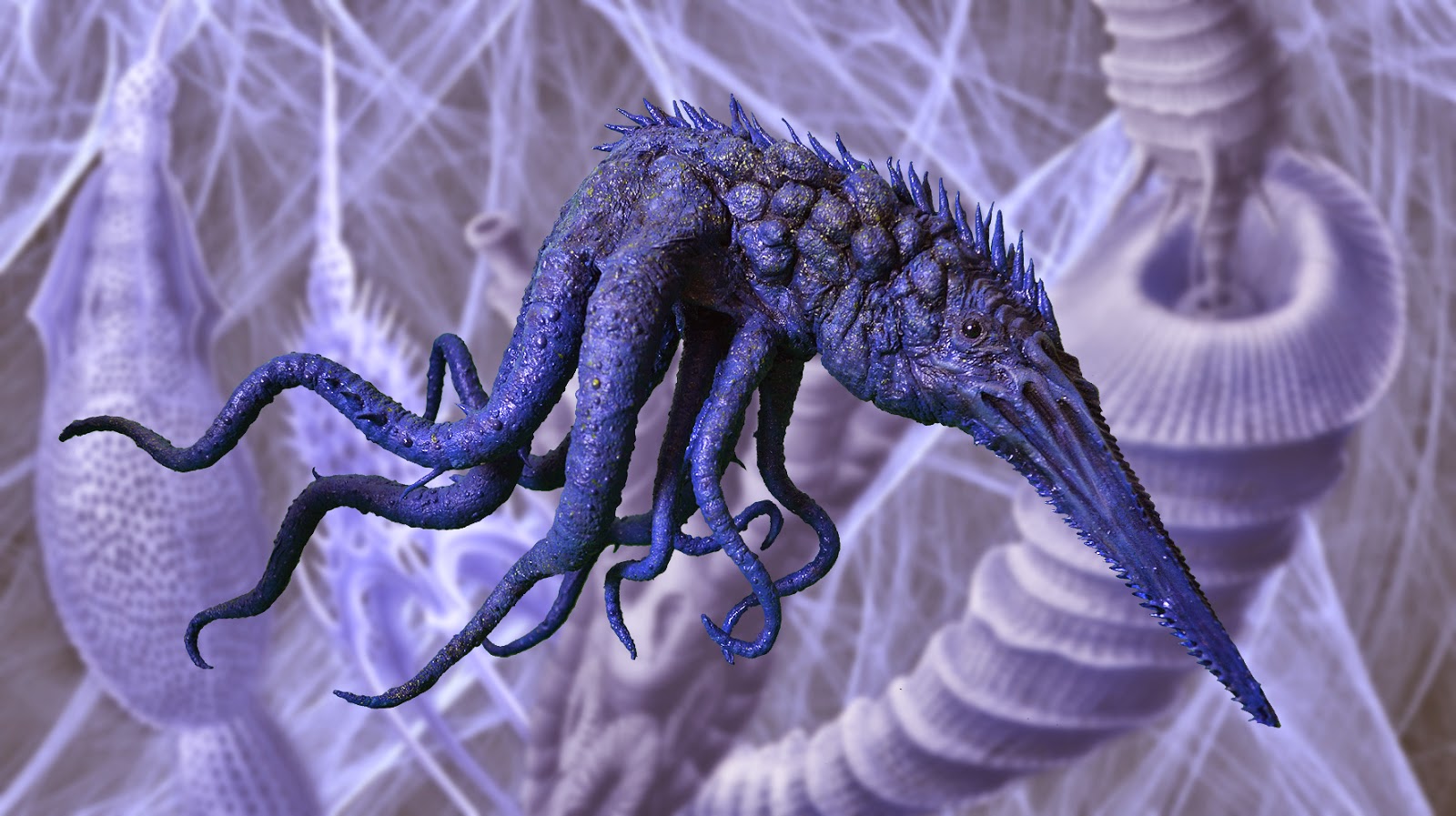 Here's what it might look like in its natural habitat. We'll see how this project develops, and how long it'll take to finish. It's presumable that all involved will work on it on and off for quite some time, but that's the nature of non-commercial projects. All those crowd funded films seem to take forever to finish up, but it's eventually they do get made and released, and we should all be much happier for it. Every finished little rogue movie points the way for more of the same, and perhaps also to the future of film making as we know it.