Nothing Is Forgotten Web Comic Monster

During the fall of 2015 I was approached by young British filmmaker Laurie Cousins about collaborating on a YouTube film project. He's adapting the web comic "Nothing Is Forgotten" by Ryan Andrews, which is a beautifully told wordless story about loss and loneliness, and weird friendships. 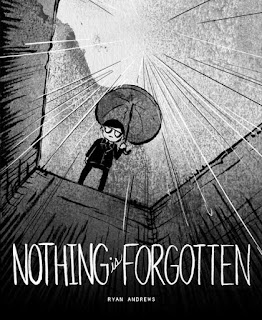 Laurie is himself starring in his adaptation, and has finished all of the live-action shooting. Here's his YouTube channel, by the way. 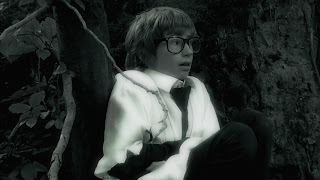 So now it's up to me to build and animate the creatures in the tale, and they look like this: 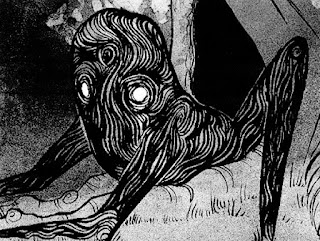 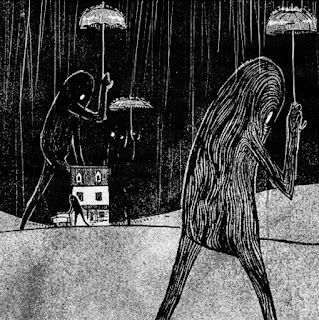 Though there are several creatures in the story they all look alike, and I decided to build only the one puppet and animate it several times. To create the swirly bark-like pattern in the creature's skin I knew I had to forgo my usual build-up techniques. Using latex would probably create a skin that wouldn't be soft enough, which meant I would use silicone instead. My first thought was to sculpt the whole character and cast it in a plaster mould, but I don't like the hassle of making the mould, aligning it correctly for the armature, and then cleaning up the casting and patching up the seams. Which meant that I still had to use some kind of build-up technique. 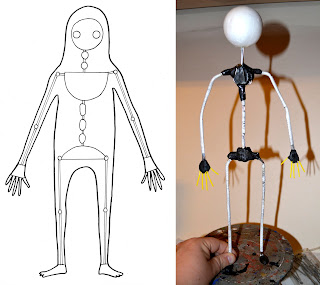 But first things first. The armature was my ordinary aluminum wire construct. I made the puppet bigger than usual, assuming that would be in my favour when creating the detailed skin build-up. 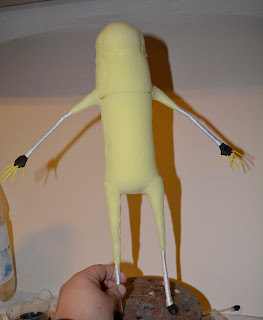 The padding or muscle structure of this puppet was much simpler than anything I had done before. I used my usual soft polyurethane mattress foam, trying to have as few seams as possible. The spindly arms and legs are covered with white yarn to give the build-up something to grab on to. 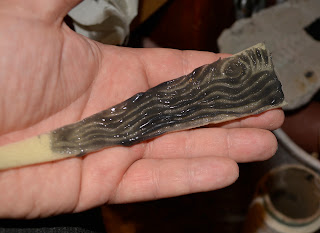 I happened to have a set of PlatSil Gel 00 silicone on my shelf. This silicone is very soft and sets up in about 15-20 minutes. When adding a bit of thickening agent the PlatSil turns into a butter-like consistency, which makes it very easy to apply to any surface. I tested the material on a bit of polyurethane, and the results were very promising. 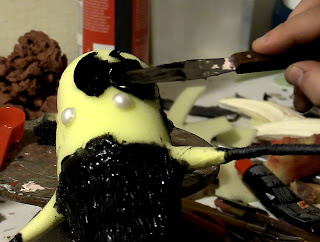 I applied the silicone, now tinted with SilcPig pigments, using a palette knife. The application was split up in sections of the puppet body, as one section needed to cure so I could then grab hold of it (or stop worrying about smearing it out) when working on the next section. I mixed up enough to first cover the front of the body, then the back, then the head, and lastly the arms and legs.
The eyes, by the way, are half-sphere buttons with a shiny mother of pearl look, which I think looked neat. 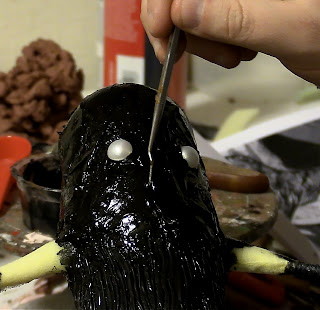 The actual shaping of the silicone skin was done before the material fully cured. I used a pointy dental tool to simply draw the lines into the silicone, letting the various sections blend into each other. 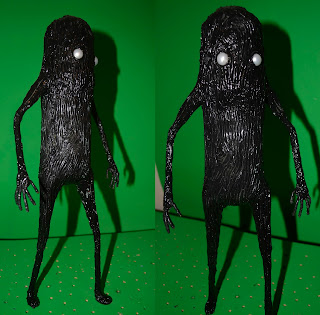 And here's the finished puppet. The skin is thick enough to cover the polyurethane, but the consistency of the PlatSil Gel 00 is so soft that it bends and flexes very well and affords the character great maneuverability. Essential for a confident animation, of course. 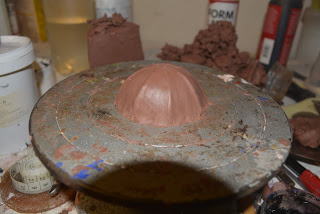 Remember that some of the creatures in one of the illustrations were carrying umbrellas; actually a pivotal ingredient of the tale? The umbrella I needed had to be pretty small, so I decided to build one myself. To make this as fast and easy as possibly I simply sculpted an open umbrella in Chavant clay and created a silicone mould around it. The umbrella was then cast in SmoothCast 325 plastic tinted red, and attached to a metal rod. 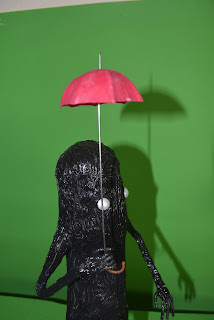 Here's how dapper the giant monster looks with his umbrella. As the same puppet will play all the monster parts, so will that umbrella be all umbrellas. My plan is to change the colour of it in After Effects, but this may not even be an issue, since the final film will be tinted a black & white sepia tone.
Posted by Richard Svensson at 8:48 AM 2 comments: