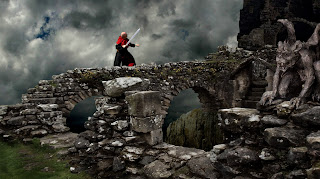 I though I'd give you an update on my Dungeons & Dragons tribute film created with John Hankins. You can read about the puppets created for this project HERE, HERE and HERE.
We are now in the stage of adding pick-up shots to the previously shot video footage, and I've started piecing together the stopmotion animation with the live-action bits. We recently posted a short video clip on Facebook, where John is attacked by an owlbear, while simultaneously searching for an owlbear feather; one of many magical items he need to find on his quest. 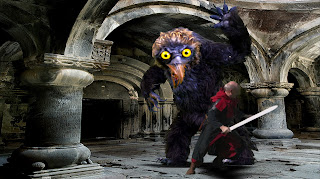 We were a bit surprised by the very strong positive reaction the video got, from both stopmo enthusiasts and the RPG crowd, so now we're forging ahead with powers renewed. It was a great tonic to get those reactions, and I'll post work in progress more often now. When you're piecing together your film you're mostly working in a vacuum, and you don't get any outside evaluation until you post it on the Internet (or show it in a film festival). Even if the reaction is negative to your work in progress clip, lap that up too, as it's a clear indication of how things are going for you. It's never too late to make changes, until, of course, the film is finished and launched out into the world.

The most surprising reaction we got was from people who asked "How did you make it work?", meaning our collaboration. John lives in Hawaii and I'm in Sweden, so we have an ocean between us, and we're confined to using emails and social media only to communicate. According to our commentators, many such projects attempted by them had failed miserably, and in those cases the distance was shorter, with the interplay spanning just over state borders. Still, entire projects had collapsed due to faulty communication. This is a great pity, for though people with similar interests and talents are spread across the world, the web offers us a means of keeping in touch and sharing information quickly and easily. So more creative individuals should be able to get together and be collectively productive no matter where you live on the globe. 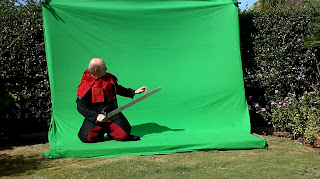 Now, John and I don't have an unfailing recipe to share with you but I can tell you how we work. When we started discussing the Dungeons & Dragons monster movie collaboration, we quickly cleared up our different areas of responsibility, which I think is the most important thing to start with. John was to act out the hero's role in front of his own green screen in Hawaii, and also create the costume and props that he needed. I handled all the monster effects, plus the Photoshopped backgrounds, and the editing and finishing of the film. This allowed John to focus on the more practical hands-on bits he really enjoys (and does very well indeed). He also wanted to have a go at one of the monsters, the purple worm, which he created as a hand puppet. All of this clarity of decision about who makes what seems like a no-brainer, but apparently it's not always addressed in a long distance collaborative project, at least not at the start-up. And if that's the case I can understand when a production eventually runs into a bit of trouble. 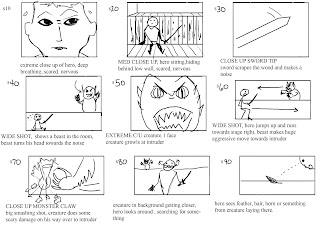 John created these storyboards to get us started. I added some extra ideas, and then John went off to shoot all the live-action video clips. 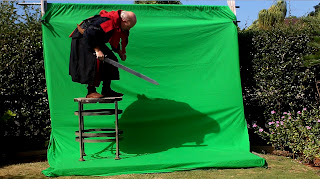 John's green screen set-up is very basic. He built his own wooden stand for holding the screen and shoots the scenes in his garden, with his wife Alicia as the camera operator, and using the sun as his only lighting source. Since it's in Hawaii, the weather is usually on his side and the shots turn out very good. Before sending the shots to me, John has also created optional versions, where the green background has been cleaned up in After Effects, and is free of shadows and other "jitter". This, of course, makes the compositing extremely easy for me. 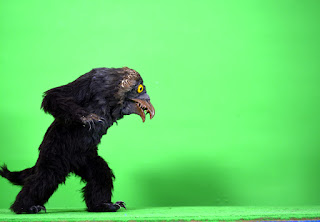 When all his shots were finished, including the purple worm hand puppet scene, John put all the material on a small portable drive and snail-mailed it to me. So, why not use Dropbox or some similar online file sharing service? We would've, and we are now, but at that time I had some problems with my Dropbox account, and we solved it this way instead.
When I had received the video footage I could start animating, roughly timing the actions of the monsters to John's acting. 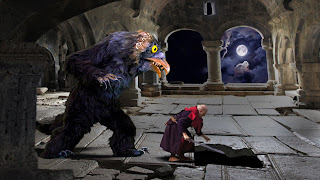 The finished scenes are turning out rather well. The backgrounds are my usual collage of photos, mixed and merged in Photoshop. When editing together the finished shots I quickly noticed that I didn't have enough footage of John to make the story perfectly clear, and that he'd need to film more of it. Apparently this is par for course in the big budget blockbuster films as well, so we're in good company. It does, however, make me wonder why a film of sometimes $150 million or more isn't planned out better. 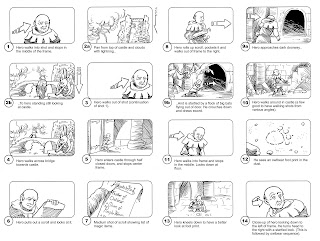 I made some storyboards for the new sequences and emailed them to John, who is now busy shooting the extra material. He had at this point grown a very stately beard and mustache, but these came off in the name of fine art.

As I said earlier, we're now using Dropbox to send clips back and forth, which is working out very well. Our collaboration is so much fun that we already have our next project planned. I can highly recommend creative people getting together in this way, using web communications. I know that so many of you out there have nobody around where you live to share your dreams and ambitions with, and that that can be enough to kill off your fledgling projects. Don't let that happen. Reach out to others around the globe, and find collaborators. It can be the start of a wonderful new way of working.
Posted by Richard Svensson at 5:55 AM 6 comments:

YouTube itself is very active in recommending things for you, including what the next clip you view should be, and how you can improve on your YouTube presence. The latter is, of course, a good thing, and I'm finally taking some advice to heart.
Among the recommendations from the YouTube staff is that you make an introductory video for those who visit your channel for the first time. It's a polite thing to do,  but more importantly, you give the first time visitor a quick overview of your channel content and the general tone of the channel itself. This is where you come in as a personal host, if you will. People in general seem to be very curious about who's behind the stuff they watch on YouTube, and this is something you can take advantage of to really set the tone for everything people watch after having seen your introductory video, especially if you're a funny or gregarious person.
I'm probably not either of those types, but because my puppet-making craft and my animations, if not unique, are at least rare and have a novelty value, my YouTube channel has something that sets it apart from many others. So I hope my YouTube welcoming video reflect that. Enjoy!
Posted by Richard Svensson at 11:24 PM 2 comments: