For a while I've been thinking about making a short video based on Alfred Tennyson's poem "The Kraken"; one of the few celebrated literary works concerning monsters. When I contacted my trusty British narrator John Hutch to have him record a voice over for my "Living Night" video, I also tossed in "The Kraken", and I duly got a number of readings varying the tone and ferocity. And so I started building my Kraken puppet. But what does the darn thing look like? Well, according to the Norse folklore it hails from it resembles an island when it lies asleep at the surface of the ocean, and it has numerous tentacles, of which it is wise to stay well clear of. Tennyson's poem makes it into an almost Biblical monster, like Leviathan, as it meets it's doom when "the latter fire shall heat the deep; Then once by man and angels to be seen, In roaring he shall rise and on the surface die." 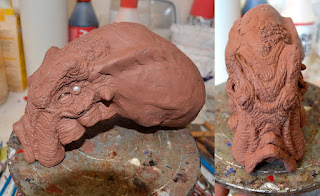 I opted for something very octopus-like. Perhaps not the most imaginative design, but I didn't want to spend too much time choosing between too many ideas. I sculpted the body in Chavant clay, and added details as far as the head started to merge with the sac-like body. 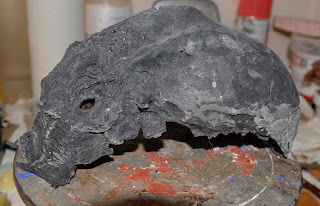 This is the latex casting I got from the plaster mould created around the sculpture. The belly is hollow and will be filled with polyurethane foam and covered with patches of cast latex skin. 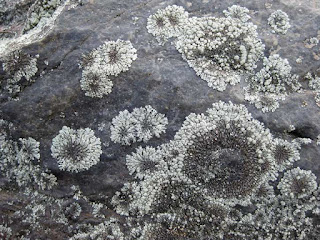 The detailing of the body was actually achieved by using latex casts of silicone imprints made from a hard lichen which is very common on sea rocks in my part of Sweden. A few years back I used silicone putty to make imprints of the very bubbly and organic surface of these lichen, and I've used these moulds to cast patches of latex skin for many puppets. It saves me time sculpting and gives me a better texture than I could produce myself. As usual, you can't trump nature in grotesquery or beauty! 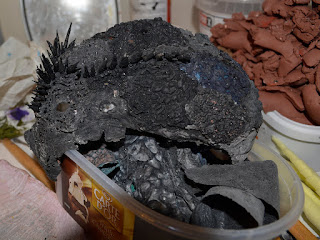 The body of the Kraken is resting on an old plastic ice cream box, which is filled with the latex lichen skin casts. The body is almost finished with its covering of the latex patches, and the head has had small horns attached. These horns are made from a mix of tinted latex and cabosil, which is simply rolled between my fingers into pointy shapes. 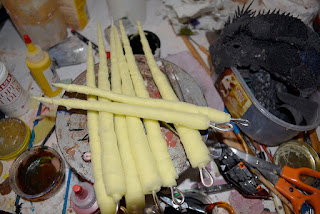 I "only" made eight arms for the puppet, using aluminum wires and thin polyurethane foam in a tight wrap. The arms were then covered in wrinkly latex skin from a plaster mould, and a long latex strip of suction cups, previously used to build a regular octopus puppet. 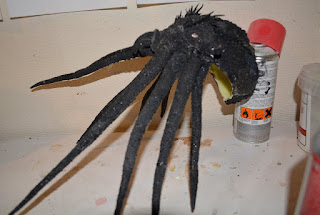 Here the arms have been attached to the body using Friendly Plastic thermoplastic. You can also see the big eye (it has two pairs of eyes) added. These eyes are Photoshop art print-outs covered with a drop-like acrylic half-sphere, which I believe is used for scrapbooking. The smaller eyes are painted in later. 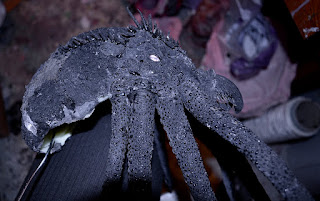 As the wrinkly latex skin differed a bit in appearance from the knobbly body, I added small warts all over the arms. To create the warts I dipped a long needle in tinted latex and poked the skin on the arms, this resulting in a tiny drop of latex being deposited. As you might imagine, this took a bit of time to finish. 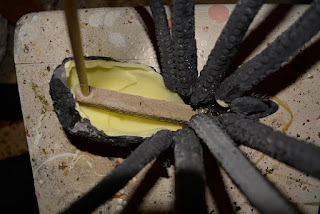 The Kraken puppet isn't required to do much in the video. It's a lumbering monster, unfolding its tentacles as it wakes up and then making some noise at the surface before being consumed by flames. I attached a long wooden dowel to the back of its body to keep it aloft when animating it. Any big bodily maneuvers will be achieved by keyframing movements of the animation in After Effects. 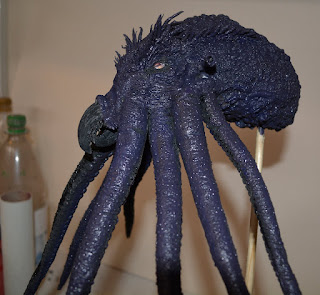 Here's the puppet with its base coat of acrylic paint and Prosaide glue.. 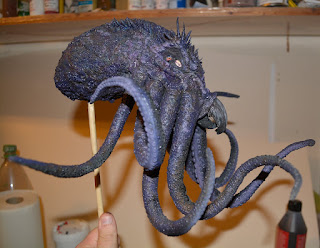 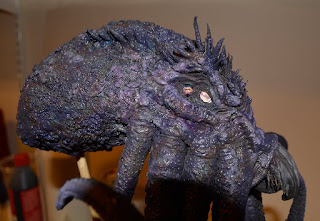 ..And here's the finished puppet with a more detailed paint job using acrylic airbrush paints. The second, smaller eyes have now been painted in too. 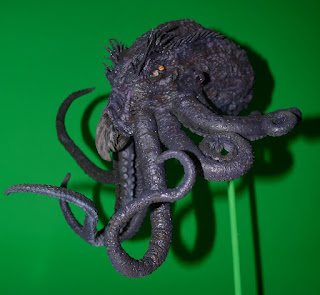 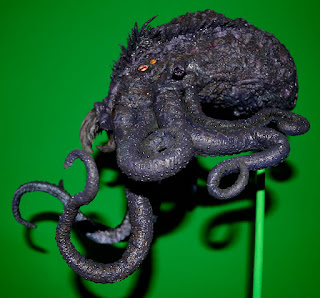 The wooden dowel support rod has been painted a green screen green, and the Kraken is awaiting its epic death scene.
I had hoped to have the film finished by the end of this year, but I still have a bit to go on it.

Instead I wish all of ye stop-motion faithful a very Happy New Year!! See you on the other side of 2015.

Posted by Richard Svensson at 5:33 AM 8 comments: