What Is It?: The Finished Film

Posted by Richard Svensson at 3:16 AM 2 comments:

The monster puppet for "What Is It?" is no different from most of my other puppets, but it does have certain things that makes it unusual. It was built pretty quickly, but as it turned out I still had some work to do on it. 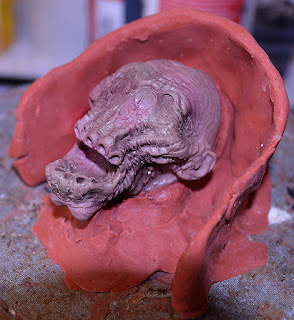 The head was actually the only new thing sculpted for this character. I made it in Monster Clay and created a plaster mould that covered all of it except for a small portion of the back of the head. 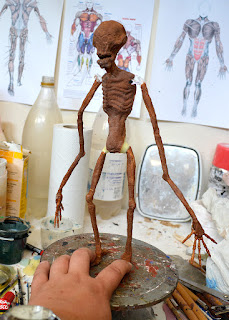 The armature, created out of aluminum wires, was as thin as I could make it. The creature is supposed to be some kind of humanoid with several spider-like aspects. The torso was re-used from a mould made for my Jersey Devil puppet, but pulled tighter around the armature. The limbs are covered with cotton dipped in tinted latex. The feet are also built up in this same way. 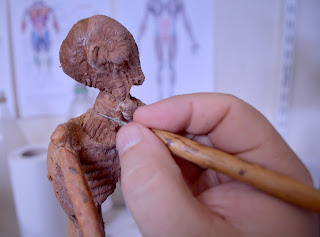 The limbs, including the neck and back, were detailed by sticking small bits of wrinkly latex skins cast in skin texture moulds. Before the liquid latex used as a bonding agent sets up I press down in some of the wrinkles with a pointy tool. That adds extra depth to the features and makes the puppet look even more gaunt. 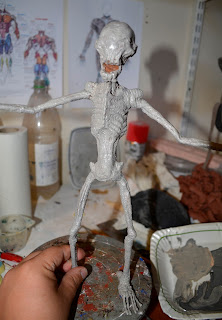 When I'm happy with the overall look of the build-up, I go over the puppet with a grey layer of PAX paint, laying it on as thinly as possible. 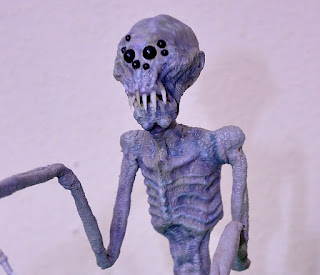 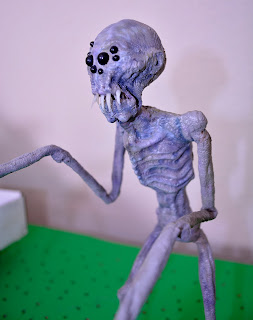 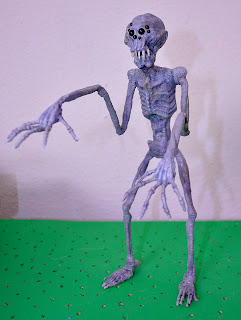 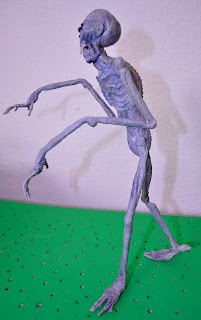 This is what the puppet looked like when I finished it late last year. But the poem I'm adapting into a YouTube video says that parts of the creature are covered in thick bristles, like the hairs you'll see on a spider if you magnify the animal. 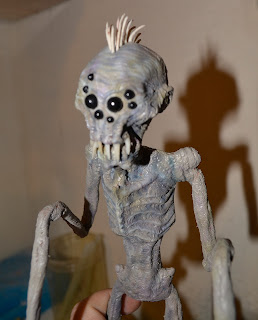 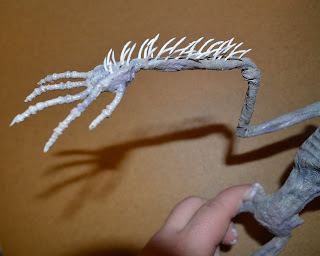 These bristles or hairs are bits of yarn are dipped in latex and rolled between my thumb and index finger, until they become pointy, and then they're left to dry. As the puppet was covered with a paint that's a mix of glue and acrylic paint I couldn't use latex as a bonding agent between the hairs and the puppet. Instead I used a flexible quick-setting superglue to attach the hairs, and a pair of tweezers to stick them in place on the arms and the head. 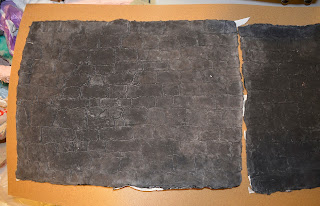 Most of the puppet animations were achieved in front of a green screen, but a few of the shots needed a small bit of set; a dungeon. Several years ago I did a clay sculpture of a stone wall, which was then turned into thick latex skins to build a set for my film "The Mewlips". I still had the plaster mould and simply cast two new skins (I had thrown away the old set, because it took up so much room). 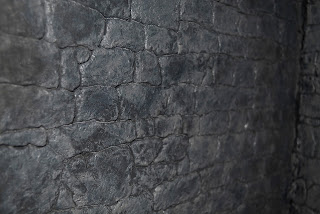 These latex skins, supported with paper towels soaked in latex, were mounted with contact cement on thick cardboard, and then dry brushed with light grey PAX paint. As it turned out, in the animated shots the walls are hardly visible, but you can sometimes glimpse them, and it's a good thing they're there to add atmosphere -much better than a plain black background. 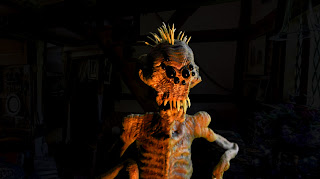 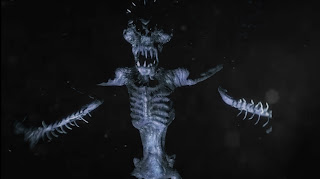 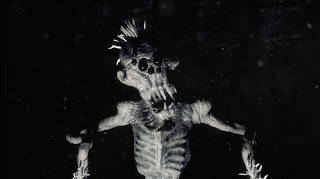 And this is what the finished It puppet looks like when it comes leaping out of the darkness in some of the scenes. The two last ones are in fact shot in front of the stone wall set.

Posted by Richard Svensson at 2:54 AM 2 comments:

What Is It?: Digital Trickery

My DeviantArt friend Jeff Kwasniewski has written a lot of funny and inventive poems, most of them in the realm of fantasy or horror. I was especially charmed by one of them, "What Is It?", which is an hommage to the ghost stories of English writer and scholar M R James. If you haven't read any of James´ work, get yourself out on the Internet right now and start Googling, or listen to any audio book version, OR get the DVD box set of the BBC "Ghost Stories For Christmas" TV movies, which frequently adapt the stories from this author.
Jeff's prose poem follows the hapless narrator who inadvertently sets loose an eldritch horror, apparently once imprisoned in Eton Collage chapel by James himself. I decided I wanted to make a short film based on this text, and set to work on it last fall, building a puppet and planning the shots. A couple of weeks ago I filmed the live-action footage, which I'm now editing in After Effects and Adobe Premiere Elements. This entry in my blog will be about the work in that editing process, which I hope you'll find inspiring, as I think it shows that you can go a long way with a bit of inventiveness and planning. 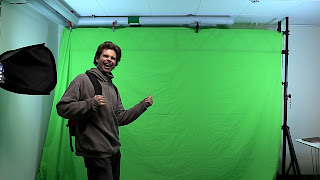 My buddy Andreas Nordkvist plays the narrator, though the actual text is read by Jeff himself. On and off through the past years I've had access to a big room in a local boarding school just a stone's throw from my house. That's where I've been putting my lights and my green screen, but that building is now under renovation, and I've had to look for another available space. Luckily for me, my nearest neighbour, a big archive, is now happily letting me use their facilities, which has resulted in me getting better sound and even more space to play around with. However, for this little adventure I only went with a very simply arranged green screen, since it was all I needed. 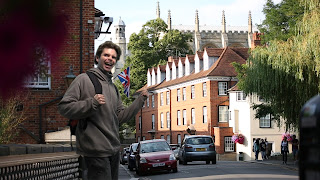 Most of the story takes place in Eton, UK. On Pond5 I found a few stock footage shots of the college. I settled for one of them, showing a bustling street with the college in the background. The clip cost $50, which stang a bit, but I wanted something more than just a still image from Wikimedia to establish the beginning of the story. As you can see, Andreas is pretty seamlessly inserted into the stock footage. This is thanks to the Primatte Keyer After Effects plugin, combined with Key Correct, both of them included in the Red Giant Keying Suite. I see now that it's priced at $799, but I recall that it was slightly cheaper when I bought it about a year ago. At any rate, this software has proven to be worth every penny. 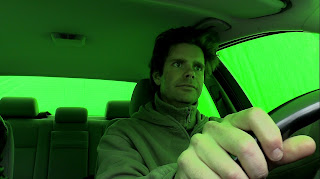 For example, if the filmmaker turns out to be an idiot, which I can be sometimes, then all is still not lost. Take this mad shot: We wrapped the green screen around Andreas´ car and did not anticipate the problems that would follow with sunlight being filtered through bright green cloth. This shot should be impossible to save, however.. 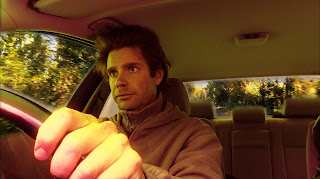 ..With the help from Primatte along with some color adjustment tools in After Effects it was possible to get a decent, if not perfect shot after all. So, why not simply get in the car and actually go for a real drive? It's still winter over here and the trees are completely bare. Some more stock footage from Pond5 makes up the moving background, which is actually an English country road. 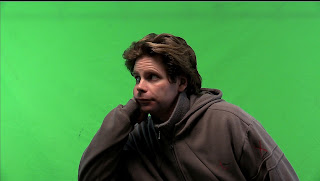 Regular green screen shots, especially close-ups, are much easier to work with, and it's possible to quickly pull your actor out of the background and stick him/her into any new surroundings. 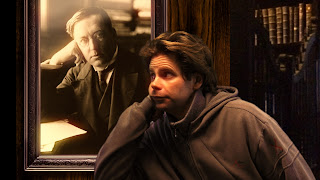 The background here is a Photoshop collage with images from various sources. When the final shot is rendered out I add a filter from Rampant Color FX, which unites the various elements in the shot and creates a smoother look for your composite image. However, if you don't want to spend any money on grading your films there are numerous free resources online. Just do a Google search for "grading filters for after effects". 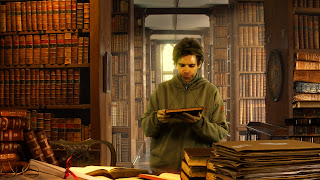 In this shot I've also added layers of dust in the air; one behind Andreas in the sunlight, and one in front of him. It's a moving camera shot, which means that we're closing in on Andreas, with the stacks of books and papers seemingly in front of him and closer to the "camera", This trick is achieved by adding layers of still images on top of each other. The chroma key footage of Andreas is placed between those. There are eight layers of images in this shot, and all of them are turned into 3D layers in AE and spaced with various lengths between each other, using the "Camera" function as a guiding tool. I'm just rushing through the procedure here, but if any one's interested I'll do a proper guide for this type of trick shot. I'm simply showing that you have quite a few options on how to make a shot composed of almost just still images really come alive. The zoom created in AE achieves the illusion that you're in a real room, thanks to the 3D layer effect. 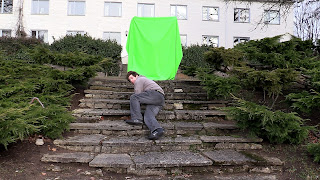 Now on to some meatier stuff. Here's an interesting shot. In the story the hero is forced to escape from a chapel cellar, where he has inadvertently released an evil entity; the "It" of the title. He's rushing back up some old stone stairs to escape the creature. The boarding school I live next to has a lot of stone stairs, stone walls and other bits of interesting architecture. I decided to use one of the stairs for this shot, as I couldn't achieve it by only using the green screen alone. I stood about midway up this flight of stairs holding the folded green screen, and had Andreas stumble in panic up the stone slabs. 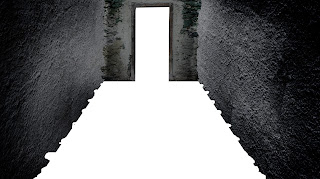 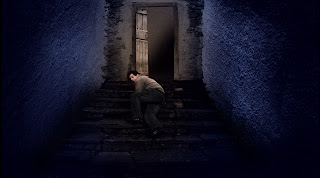 In the final shot I've added this mask in AE, also using the masking tool to draw around the parts of Andreas that were obscured by the mask image. This meant that I had to draw frame by frame around him for parts of this shot, but as he moved fast I didn't really have too many frames to worry about. When this shot was rendered out I also added a few color grading filters. 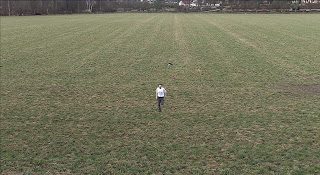 Here's another shot that illustrates quite well that you can go a long way with a little ingenuity. This huge field is another neighbour of mine. Andreas just ran across it towards the camera. 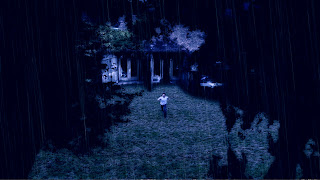 In After effects I then added a Photoshopped mask of an English cottage, along with some foreground silhouettes of wind-swept trees, some free digital rain found and downloaded from YouTube, and finally a grading filter on top of it all to soften the shot. Placing the cottage mask correctly over the live-action footage I could actually have Andreas running out the door. 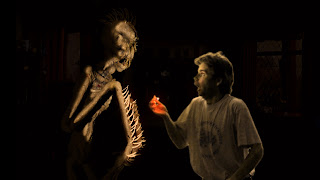 So, what's all this running about, then? Well, here's a quick glimpse of the "It" following our hapless hero as it surprises him in his cottage. But more about this creature in the next blog post.

Posted by Richard Svensson at 8:46 AM No comments: