Sonnets of the Midnight Hours: A Vision of the Future

I've started adapting Donald Wandrei's poetry sequence "Sonnets of the Midnight Hours" from Weird Tales. It'll be a somewhat irregular series on my YouTube channel. Wandrei was, of course, one of H. P. Lovecraft's buddies and a regular contributor to the seminal Weird Tales magazine. 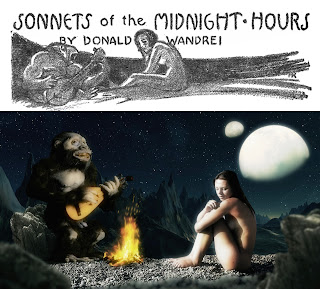 Each installment of Wandrei's sonnet collection had a heading drawn by Hugh Rankin, a very busy illustrator who, among other things, illustrated Robert E. Howard's Conan stories. The heading shows a nude woman sitting opposite an ape-like demonic creature. I thought it would be fun to try and recreate that image on film. 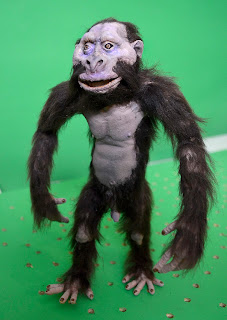 I didn't bother with making a new puppet for this very short clip, so I resorted to re-using an ape-man I built for my film "Memory", coincidentally adapted from a Lovecraft prose poem. You can read all about the making of this puppet right HERE. 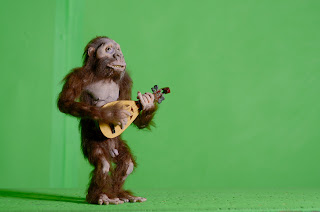 Way back in the 1990s, when I was just getting into animation using a digital camera I bought a bunch of miniature props meant for various projects I'd dream up, but I never really used any of them. The lute was one of these. It's actually made from wood and nicely detailed. I animated the ape puppet plucking at the strings, hopefully matching the tune I was eventually going to add to the finished footage, but I didn't do any timed animation to any music. I just hoped it'd look fine in the end, and it did. The ape was supposed to sit down on a rock. I didn't bother with a miniature rock, so I just had the puppet crouching down a bit. 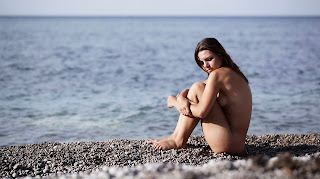 For the nude girl, I found a stock footage clip at, if I recall correctly, Pond5.com. She's sitting on a pebble beach with the sky and sea in the background. I was able to remove that background by pumping up the saturation in After Effects, making the blue sea and sky very blue; blue enough to key it out using the Keylight plug-in. I could then return the saturation to a more natural look. The pebbled beach became the ground the characters are sitting on. And, of course, a campfire was also added using a stock footage clip of a fire shot against a black background. The mountains and the double-mooned sky in the background is a stock digital illustration found at Depositphotos.com. 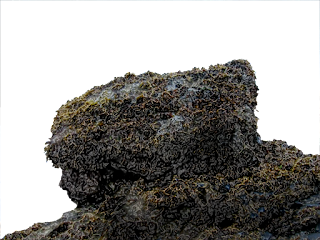 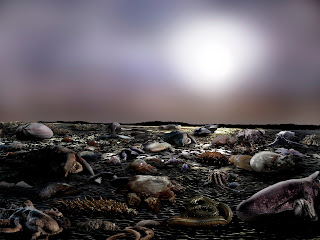 Wandrei's poem paints an apocalyptic vision of our planet's future where the oceans have been emptied of their water. The creatures of the deep lie floundering and dying, and all the uncovered secrets of the sea are covered with slime. To create that look I downloaded stock images of rocks covered with seaweed and added the "Plastic Wrap" Photoshop filter over them. This gave the textures in the photos a very slimy look. I also re-used lots of Photoshopped beached sea creatures from my Dagon film. 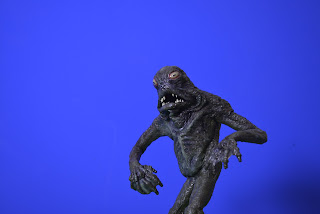 We do get a brief glimpse of a sea-dwelling race, which might now become the new masters of the world. Many years ago a built a bunch of puppets for a Lovecraft-inspired online game called "The Talisman." I honestly have no idea what became of it, but I spent quite some time building a bunch of creatures for it. One of these was representing a "deep one", a mix between fish, amphibians, and humans dreamt up by Lovecraft for many of his tales and also used by other authors. I simply took one of the photos of this puppet and 2D-animated it in After Effects using the puppet tool. 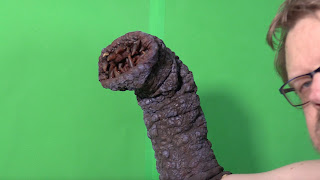 At the end of the film, you see a mysterious slug-like white thing writhing about. Again I used an older puppet, a hand-puppet built some years ago for a short horror film (not featured on my YouTube page.) I shot it against my puppet stage green screen and added a few manipulations in After Effects to change its color and make it look bigger and broader.
That's about it. As you can see this project held few innovations and no new puppets. But it was a fun exercise, and I'm planning to do a few more Sonnets of the Midnight Hours next year.