The Kraken: The Finished Film

With this little short I've attempted to create a mood piece rather than frenetic monster action. You'll have to be the judge of how well I accomplished that.

Posted by Richard Svensson at 4:15 AM 3 comments:

The Giant Squid: A Reluctant Puppet

In my last post I talked about building the main puppet for my Kraken poem video, and that project basically went be like a sweet breeze. Not so with one of the background characters. In Tennyson's poem, three lines are dedicated to "unnumbered and enormous polypi", which I take to be giant squid. I'd better show those, then, even if it's just for a few seconds.

I started with sculpting the head and body of the squid, making it about six inches long. I then cast it in latex from a dental plaster mould, and added extra support within it using cotton dipped in latex. 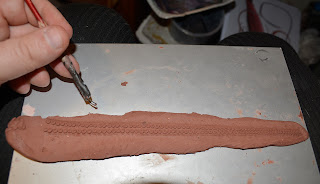 I then proceeded with sculpting the underside of the tentacles, where you find the suction cups, and I made these cups as small as I could. Now, one at a time the tentacles fitted perfectly into the body skin -however, clumped together their base became too thick for the mouth of the head. It simply meant that I had to create new sculptures of the head and body to match the tentacles. It was a long time ago I made a blunder like that. 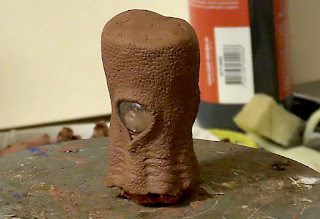 So, here's the new head. I split it up from the body as a separate sculpture. Much easier to cast. By the way; the eyes are lens-like flat blobs of glass, ordinarily used as decoration for various potted plants.

And here's the new body. I only made a single piece mould, which meant that I had to use long, pointy tools to dig out the clay still stuck at the very bottom of the mould. I really should've made it a two-part mould. 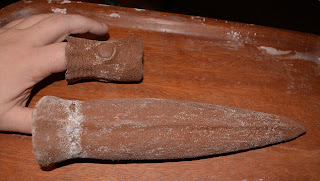 The head and body cast in latex, supported on the inside with a cotton/ latex mix. As you can already see, this will be a pretty big puppet. 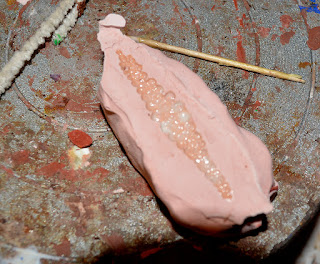 Besides the cluster of eight tentacles, the squid also has two which are at least double the length of the body. These tentacles end in leaf-like shapes which are also covered by suckers. One sculpture will represent these surfaces on both tentacles. The latex is cast in the resulting plaster mould, and is almost ready to be removed, making space for a second casting. 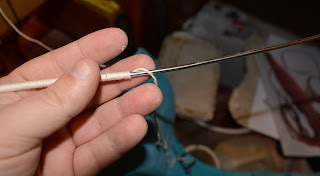 The long tentacles are simply two long bits of thick aluminum wire. They are covered by one even layer of soft string, which is then dipped in latex. The latex/string surface creates a perfect bond to the wires for the warty latex skin, which will go on next. 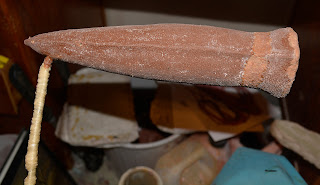 As I'm no friend of suspending puppets on wires I added a support rod with bendable joints. This will keep the puppet aloft as well as allow me to animate the entire body, if I should wish to do so. 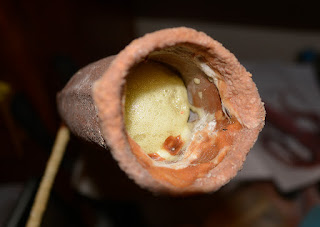 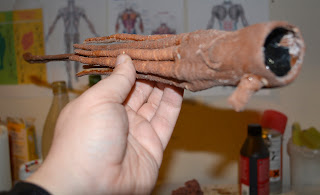 The head is joined with the tentacles using Friendly Plastic thermoplastic. I've also stuck on a small breathing tube by rolling up a piece of latex skin. 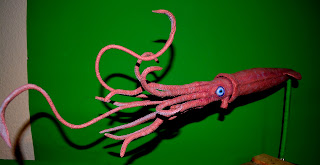 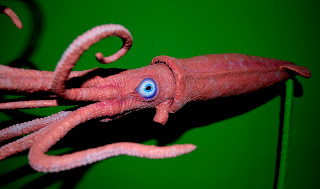 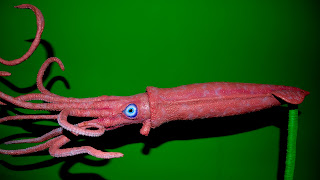 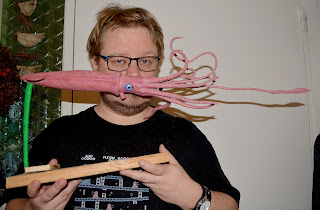 Here's how the final squid turned out. It's painted with the PAX paint mix of acrylic paints and Prosaide makeup glue, and finished off with acrylic airbrush paints. The eye was painted entirely with the airbrush, and then sealed with Glossy Accents scrapbooking plastic. The squid is bigger than the Kraken puppet, has more moving parts and took longer to build. But that's the way it goes sometimes. Never underestimate a background player!

Posted by Richard Svensson at 5:05 AM 3 comments: