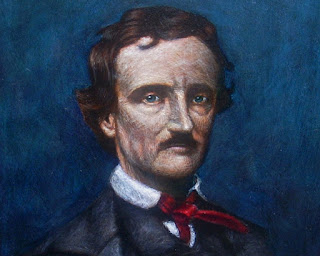 "The Conqueror Worm" was, of course, written by Edgar Allan Poe. It's a poem allowing for all sorts of interpretations, but an overall apocalyptic theme is certainly obvious. I've been planning on adapting Poe for quite a while and I actually made an adaptation of "The Facts In the Case of Mr. Waldemar" in high school, back in the very analog video days of the 1990s. I was Mr. Waldermar and melted at the end of the film, having custard running down my face. 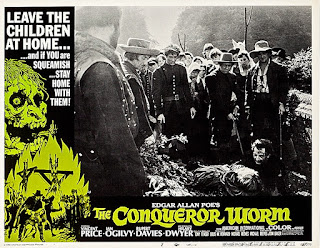 And, as I'm sure you know, Poe movie adaptations have been around almost as long as cinema has existed. "The Conqueror Worm" has also had its adaptation, though it's a cheat of sorts. Michael Reeve's excellent "The Witchfinder General" (1968) was distributed in the US by AIP under the title "The Conqueror Worm" to include it in the AIP cycle of Poe films, mostly starring Vincent Price. 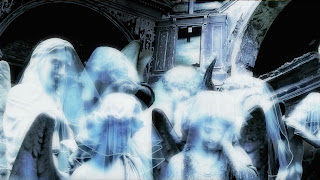 To adapt something as symbolically themed as Poe's poem invited an opportunity to create surreal visuals of a kind I hadn't approached yet. A throng of angels watches the spectacle of humanity on a cosmic stage until the conqueror worm appears and at the end of the show is revealed to be the master of all. I plundered my usual resource, Depositphotos.com, for stock images I could revise in Photoshop. A couple of HD photos of a dilapidated theatre served as the playhouse where the angels gather. I cut holes here and there in the images so I could place CG animations of a swirling cosmos behind that layer in After Effects. 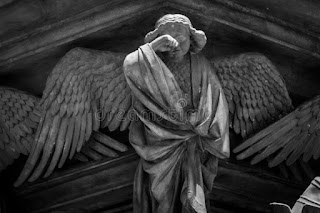 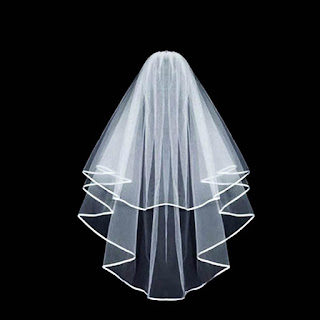 The angels were represented by stone statues prepared in Photoshop. I also found stock images of veils shot against a black background. Those were added over the heads of the angels, with some tweaking with distortion tools in After Effects. 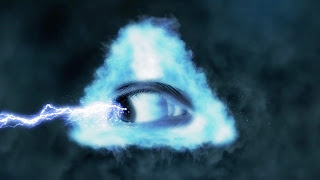 God was a mishmash of stock footage from Videoblocks.com: A cloudy background, smoke animations arranged to create a triangle, a close-up of a man's eye, and CD lightning bolts. 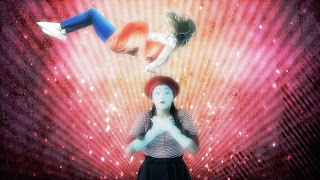 Most shots are a collage of photos and stock footage from Videoblocks.com. In this shot, the mime is live-action stock footage, as is the animated background. The falling girl (along with other various things passing in and out of the shot) is a stock photo slightly animated with the AE puppet tool. 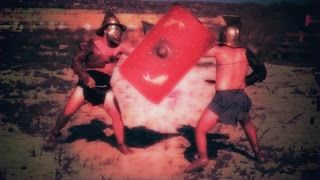 The cavalcade of horrid things humanity is guilty of is represented by plain stock footage shots of various historical violent scenes. I only added a filter over them and had them transition into each other using black ink added in water as a matte. 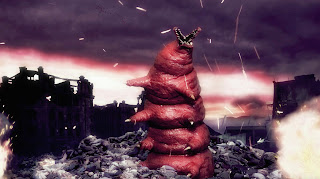 The very apocalyptic shots showing the appearance of the worm were, again, built using stock images. I found a few photos included in my stock photo collection showing behind-the-scenes shots from some zombie movie, where "dead" people were stacked upon each other. Perfect for my intentions. 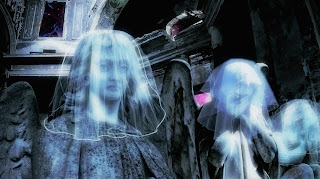 The final shot of the angels shows one of them opening its eyes. That was simply made by using another stock shot of a woman opening her eyes, cutting out that section of her face in After Effects, and applying the footage over the face of the stone angel. The soft edges of the matte tool cut-out, some color grading and the veil in a layer over the angel hopefully helped sell the illusion. 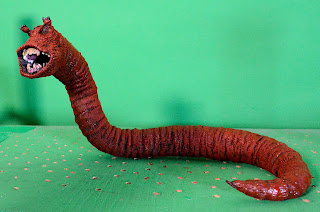 So, now over to "our hero; the Conqueror Worm." I actually started planning this film last year and made a worm puppet, that I ended up not being happy with. I thought this lean beast didn't exactly represent the gorged monstrosity that fed on mankind. Instead, I included this puppet in my film "The Elder Pharos." 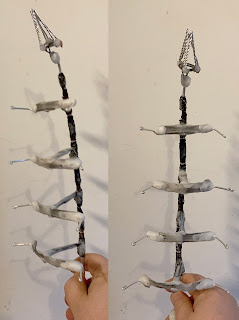 On to Conqueror Worm 2.0. I built this puppet pretty large, so I could animate it making very slow movements. As I wanted it to look like a fat maggot, I knew it needed lots of padding, something that always gets in the way of smooth and easy animation. I included a kind of rib cage in the armature to fill out the body of the puppet and create the desired bulk. The tiny legs were also attached to these ribs. I only made a section of the worm, needing just the part seen above the heaps of bones and bodies. 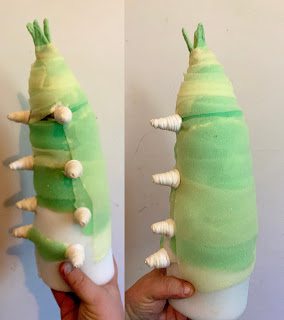 I used very soft polyurethane foam to pad the worm's body. I put on layer after layer very loosely. Soft yarn was wrapped around the legs and covered with latex. 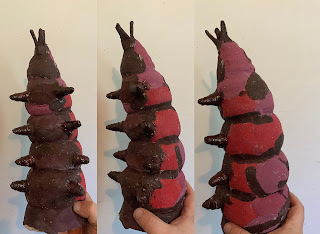 To create a segmented look for the chubby body I simply wrapped yarn around the parts where I wanted to pull in the foam. Thin latex patches cast in a skin texture mold covered up the body. 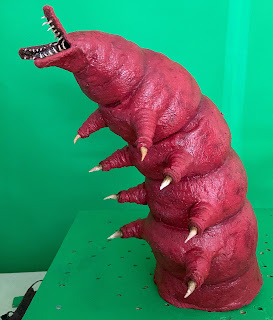 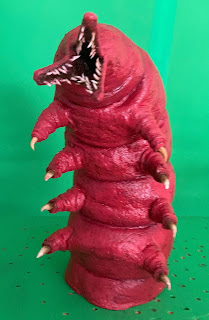 The finished puppet was painted with tinted latex. The claws and teeth were made from tissue paper dipped in latex. A single t-nut stuck to the bottom of the armature secures the puppet to the animation stage. 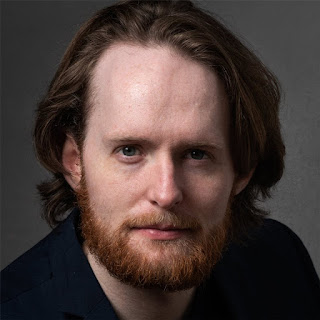 Lastly, I have to mention my UK buddy John Hutch, who, like many times before, provided the narration. We've collaborated quite a few times by now, and will continue doing so for the forseeable future. I really wish he'd get a break as an actor. He's done bit parts here and there in various British TV shows including the fantasy series "Merlin" (where he gets knocked out by prince Arthur in one scene.) For now I'm planning on adapting Poe's "Dreamland" with John narrating.
Do I have a Poe dream project? Yes; it's animating "The Raven" narrated by Nicholas Cage.
Posted by Richard Svensson at 3:56 AM 8 comments: