Last month I posted a video based on H P Lovecraft's poem"Star-Winds" from his sonnet cycle "Fungi From Yuggoth". It's one of my favorite pieces, and as with many of my projects, I've been wanting to adapt it for a while. 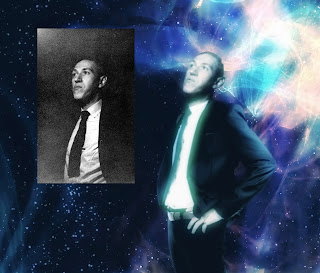 There's not much to tell about this production, actually. Most of it is 2D animations in After Effects, with various digital stock footage effects spliced in. Lovecraft himself appears in the film as a Photoshopped still. I used a couple of photos that I liked and spruced them up in Photoshop. There aren't that many photos of HPL, and most of them are of a rather poor quality, being taken by his friends using the consumer cameras of the time. 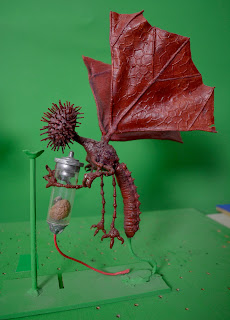 As you saw in the film, there are two stop-motion sequences. The first deals with the inhabitants of the distant planet Yuggoth (Pluto), which were represented by an old puppet built for my film "The Lovecraft Alphabet". It's a Mi-Go carrying a brain cylinder, and it was pressed into service again for this short sequence. 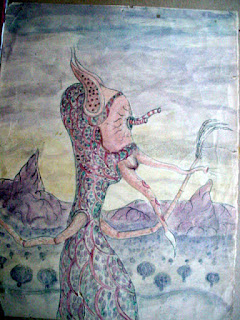 The other sequence is set on Yuggoth's verdant moon Nithon, and features one of its strange inhabitants (you can also see some of my trademark stop-mo tentacles wiggling about.) The Nithonian was based on a drawing made by Lovecraft's buddy Clark Ashton Smith. In fact, I tried to emulate the look of CAS's colorful images in the landscape of Nithon. 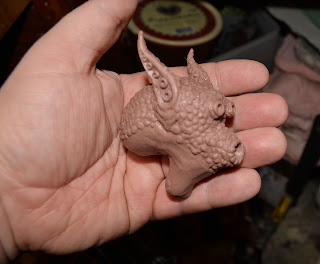 I made three sets of sculptures to create the puppet. The first was the head, as I usually do to get a grip on the character. 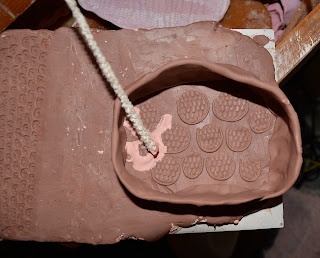 I also did a bunch of small roundels that would eventually become the patchwork of plates covering the body of the creature. In all castings I applied the first layer of dental plaster using either a soft brush or, as in this case, a fluffy pipe cleaner. 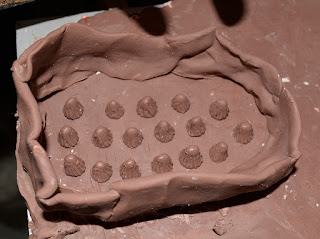 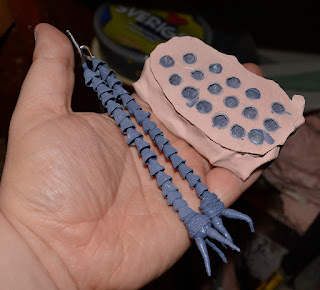 The third set of sculptures was this collection of tiny buds. They were later cast in latex as hollow shells and stuck together to cover the lanky arms of the Nithonian. 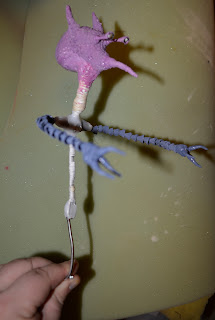 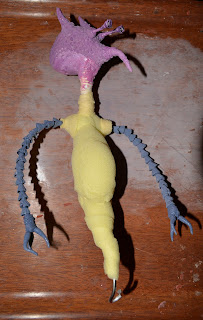 The armature was super simple, basically just a thick aluminum wire with the arms attached and a single foot with a t-nut (not shown in the photo.) 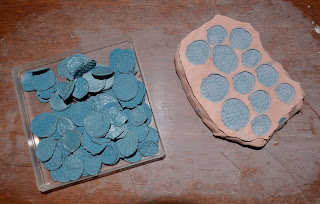 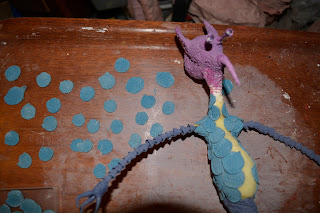 From a dental plaster mold I cast a bunch of small latex plates, that were individually attached to the puppet body using liquid latex as a glue. 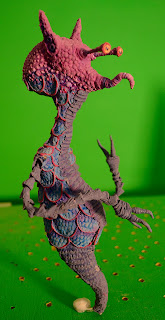 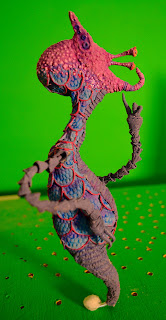 The finished puppet also had a pair of eyes on stalks and a small trunk, both supported by copper wires encased in soft plastic. It's also been painted with acrylic airbrush paints. 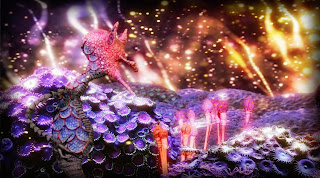 The landscape on Nithon was cobbled together in Photoshop using photos of various colorful corals, with a CGI animated backdrop for the weird-looking sky. The plant the Nithonian picks is a latex prop from my Star Trek-related film "Darmok & Jalad."

This project isn't the more familiar bombastic end-of-the-world scenario that Lovecraft has become known for, instead it's about his lesser-seen lyrical side, which I think he would've liked to be more remembered for.
Posted by Richard Svensson at 2:35 AM 1 comment: