The concept for this one is very simple and even seems to be a bit trendy at the moment: Making videos about creepy places where unexplained events have taken place or are taking place. I did one earlier called The Haunted Room, and this project is a development of that idea, you could say.
So, I'll go through each scene and make some comments on it. I probably shouldn't, since it's really up to the viewer to make up his or her own mind about what has happened in those abandoned places. Most of the content in this film is cobbled together from still stock images and videos, but there is some animation here and there. 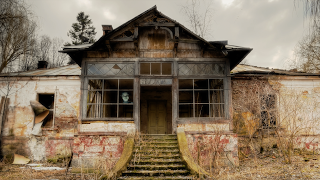 I've downloaded all my stock photos from Depositphotos, and then made a few tweaks to them in Photoshop. This old place is obviously haunted by a girl who seems to be stuck in a single window pane. the girl, like most of the stock videos used here, comes from Videoblocks. 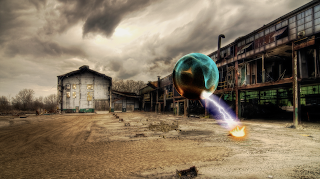 My idea here was that some government experiment went to heck and this energy sphere is still around causing havoc. Again, a blend of stock effects and animations. 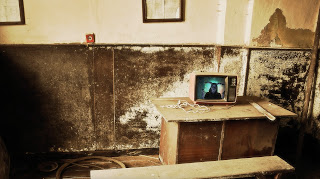 An old abandoned classrom with an unplugged TV that turns on anyway. A satanic ritual of some sort is displayed on the screen. the screaming noises I used are supposedly "real" sounds from Hell, picked up by drilling crews. It can't get more authentic than that! 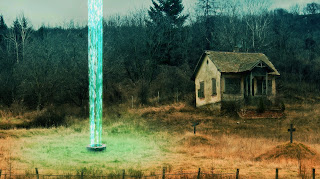 This shot is, of course, alluding to H P Lovecraft's "The Colour Out of Space." The crosses and the well were added in Photoshop and the green energy is a stock CGI effect tweaked in After Effects to look a bit more organic. 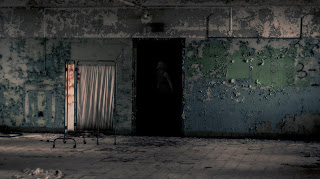 The abandoned asylum is a must, and I found a very nice stock CGI zombie girl which I stuck into the dark doorway. 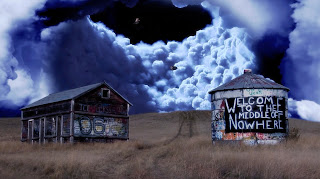 This field is a stock video -you can see the grass moving slightly which I thought was nice. I replaced the original, very blue and calm sky with a CGI cloud vortex. The writing on the silo was there in the original stock footage, 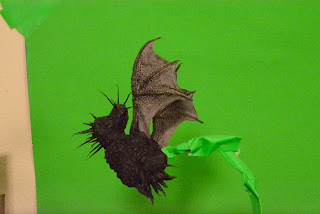 The two bat-like creatures circling the cloud funnel are a single puppet once built and animated for my film "Azathoth." It was pressed back into action here. 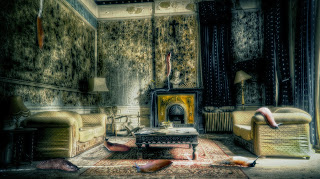 A once-nice drawing room invaded by giant slugs. I thought about having dead people sitting on the furniture, but decided against it, as the place would look more abandoned without them. 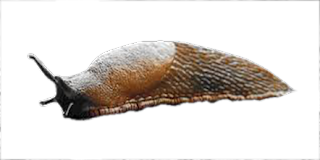 The giant slugs were simple photos of the brown "Spanish" garden slug. My garden is, unfortunately, full of the pests. I moved them about in After Effects using the Puppet tool. 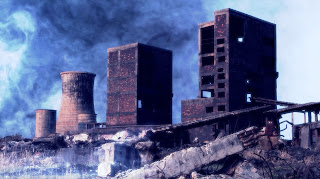 The scene of some industrial accident, though it might have occult overtones, as you can glimpse gigantic tentacles looming out of the mists behind the buildings. I re-used old animations of a tentacle prop. 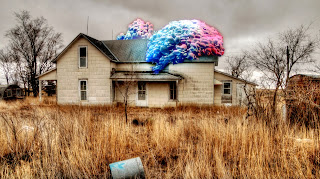 A farmhouse afflicted by some sort of pulsating alien fungi. Again, a bit of Lovecraftian overtones. The fungi are actually some sort of ocean anemone creature. 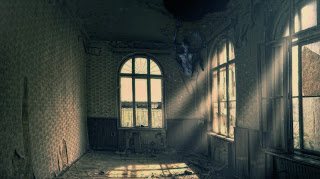 Some sort of stately building where a zombie-like creature sits on a ceiling corner and then scuttles off into a hole. 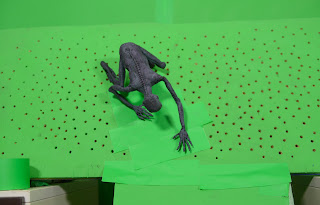 The creature is a zombie puppet I've used a few times over the years. It was actually animated upside down since that was easier for me, and then flipped in After Effects. 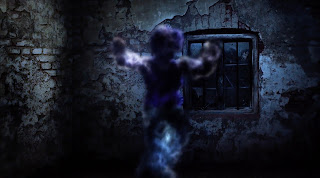 This shot is actually a complete stock footage clip, so kudos to whoever came up with it. 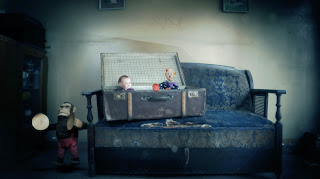 Of course, you need some creepy toys when doing a video about haunted places. I re-used a couple older puppets that still held up quite well despite being over ten years old by now. 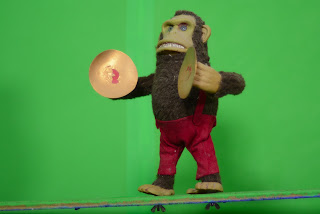 A commentator on YouTube noted that it was obvious that the cymbal monkey would come to life, and he's right -why put it in there and not have it bang its cymbals? 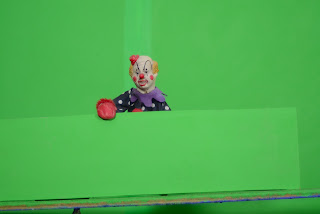 The clown puppet might've been a better surprise, but a clown puppet is a rather obvious addition to a cast of haunted toys, right? 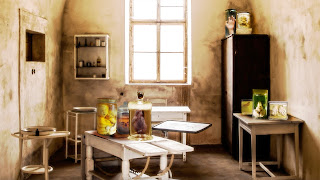 In this shot, I added the jars and bottles with freaky contents. The beating heart is a stock animation placed inside its jar with some After Effects trickery. 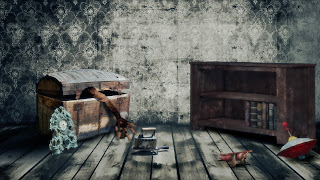 I thought the last shot would be a bit humorous, with a hairy arm grabbing a bug scuttling by on the floor. 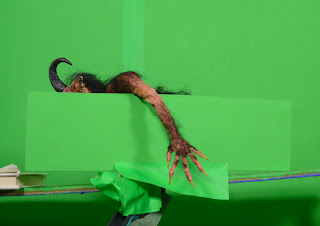 The arm came from another old puppet, a devil puppet that has popped up here and there in my films. Again, despite being over a decade old, he's held up quite well.
This film was another little experiment in creating mood. I'm quite pleased with it, but it's not something I can do too often or the idea will wear very thin indeed. I might return to it eventually.
Posted by Richard Svensson at 2:47 PM

Thanks! It's a bit different from what I usually do :)

Fascinating glimpse into your work, Maestro! Nice blog, too! As Ed Wood used to say, "I bet a person could make an entire full-length film out of stock footage alone!" It's kind of like moving collage... and an art in itself. But that takes some mixing in of this and that, and some first class skills, such as yours. I'm impressed!

@Unknown: Thanks! I actually enjoy, like Ed wood did, putting together stock material and seeing what I can make out of it. There's a lot of good material out there, but very little of it is used in the contexts I use them.