I can't recall who came up with the idea, but I'm sure someone suggested to me, at some point, that I should do a video where we observe fantastic things happening without any cuts. I like a book by Edward Gorey called "The Untitled Book", where every page is an illustration of a garden where first very little happens, then all sorts of strange things start to happen. 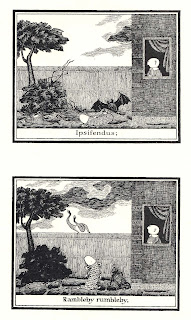 Another Gorey book, "The West Wing" is probably also an inspiration. The reader walks through a stately but empty house, sometimes seeing bits of weirdness.

The room in my film is inspired by a room in my grandmother's old country house, a guest room that was seldom used with an old carpet and old wallpaper. It is, however, not haunted in the slightest. I furnished my haunted room with various props that I could animate during the brief running time. The grandfather clock has a time-lapsed dial, which speeds up, and then stops to start going backward. There's a ball and a rocking horse moving on their own accord, a bloody handprint, and a CGI spider crawling down the wall. The one thing happening throughout the video, though very slowly, is the framed portrait of the young man. He turns from a handsome chap into a decomposing corpse.

This was very easily made by having the original photo dissolve into a Photoshopped corpse version. Inbetween frames I also added bits of distortion to make the hairline recede and his mouth frown up a bit. It's not a perfect morphing effect, but I think it did the trick.
The video ends with a small demon crawling out from behind the clock and invading the rest of the house, indicating that the haunting has now spread. 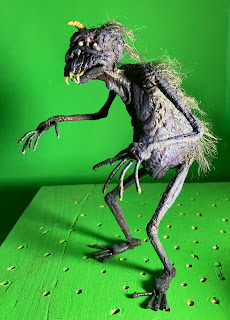 I actually built this puppet so quickly that I didn't snap any photos of the making of it, but it's basically the same basic puppet I make when no extra bells or whistles are necessary. 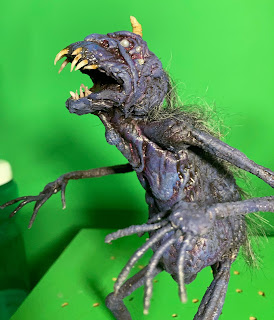 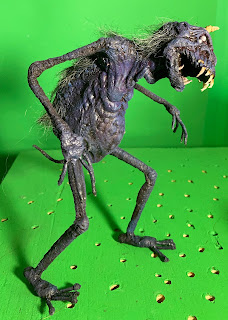 The critter is about eight inches tall, so a fairly small puppet. I sculpted the head, neck, and torso in medium-grade Monster Clay and cast a latex piece from a dental plaster mold built up over the sculpture. The rest of the body was built up with foam, cotton, tissue paper, and latex over an aluminum wire skeleton. I added tie-downs both to the feet and the palms since the demon would briefly walk on all fours. Bits of crepé hair was attached to the body using liquid latex as an adhesive. The teeth and the horn are tissue paper mixed with latex, and the eyes are small scrapbooking pearls.
This was a fun experiment, and I sort of made a more elaborate variation of it a bit further down the road. But more about that later.
Posted by Richard Svensson at 11:46 AM

The final monster is GREAT! And now the haunted room has become a haunted house! Soon a haunted street? a haunted village? haunted world?! I think I feel a poem coming on! I'll send it to you when I'm finished!