So what the heck have I've been up to during September and October?? Well, not blogging or making anything to blog about; that's for sure. For these past two months I've been building stuff for a local Halloween show, and it took me a bit longer than I had anticipated. Here's a quick rogue's gallery of some of that work. 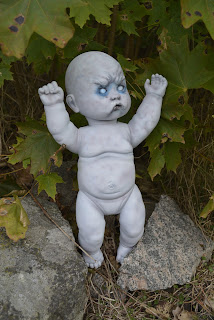 This is a "Myling", a child ghost eager to exact his revenge on those who ended his short life, most likely his own mother -a young woman who didn't want this responsibility early in life. This tiny specter from Swedish rural folklore was made from a store-bought rubber baby doll. I changed its face using epoxy and gave the doll a new paint job. 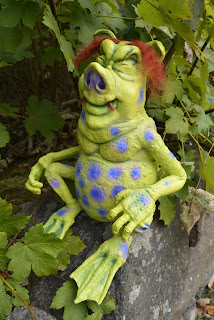 The poop monster, created by building up latex and cotton over bits of urethane foam. The puppet is about a foot and a half, and is supposed to sit on an old chamber pot in the final exhibition. 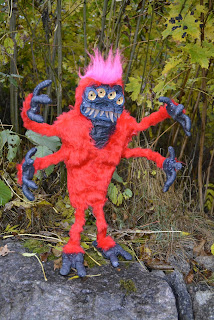 The man-eater monster; a companion to the poop monster and about as large. The body has an aluminum wire armature covered with fake fur and a cotton/latex mix. The teeth are cast in latex and the eyes are flat glass blobs with a painted backside. Cheap and simple stuff! 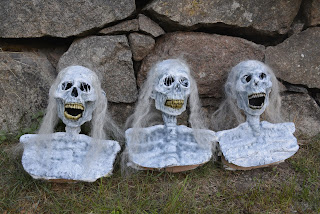 Three ghostly heads built up with latex and cotton over plastic skulls and cardboard. In the exhibition they'll be suspended from the ceiling and have flimsy bodies made from torn fabrics. 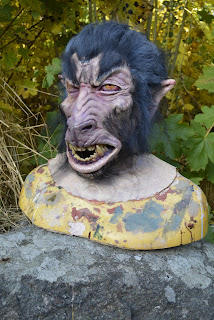 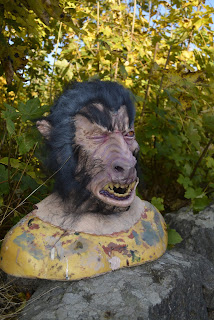 A werewolf in mid-transformation. It's a hollow latex mask covered with fake fur and crepé hair, that is pulled over the head of a mannequin. I also made a deformed hairy hand. 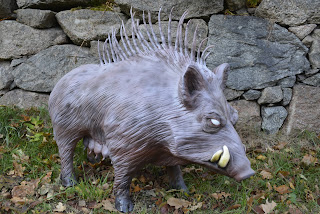 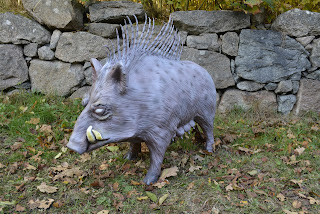 This is the biggest piece I created for this project; the Galloping Sow. This folkloric monstrosity is a supernatural pig with back bristles that are long and sharp enough to cut you in half when she runs between your legs. She haunts graveyards and crossroads at night. This model is a modified plastic wild boar garden decoration. I built a new face for it out of epoxy, added the rows of teats under her belly, and the back spikes, and inserted small lights in the eyes. A new paint job finished off the whole thing.

Now I'm hoping to get back to my scheduled programming of making smaller monsters for the great YouTubian void.