Still trying to catch up with my YouTube backlog, this film was posted on my channel in early December 2019. I'd been wanting to adapt this old-fashioned kooky poem for a while, and I finally got around to it. It's written by Hilaire Belloc, and is included as the letter "D" in a work called "The Moral Alphabet." For me, it was also an opportunity to delve into a very particular cinematic style, but I'll get back to that. 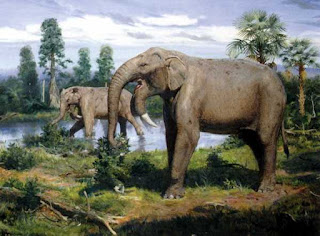 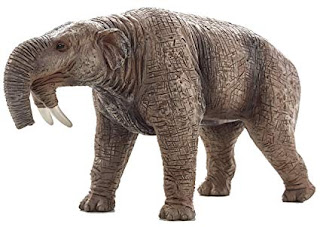 The Deinotherium was a real animal and lived up until ca 11 000 years ago. It was a huge mammal with tusks protruding from its lower jaw. Traditionally it's been reconstructed as very elephant-like; that's the version I grew up with as a paleo art-fascinated kid. Nowadays it's been turned into something looking more like a tapir. I wanted my Deinotherium to be not only extremely old-fashioned but also something of a caricature of those old depictions, to go with the jokey tone of the poem. 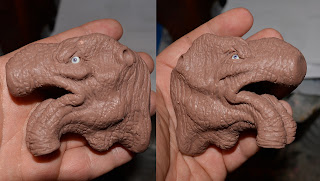 The only part of the Deinotherium puppet that was an original sculpture was the head. I used medium grade Monster Clay, and a pair of small acrylic doll's eyes I had bought on eBay. 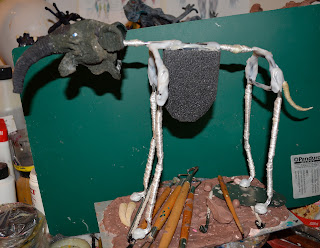 The head was cast as a skin in tinted latex. Aluminum wires padded with soft yarn were covered with patches of latex skin cast in an old texture mold and attached to the head using Polymorph thermoplastic. An aluminum wire loop also made out the jaw. The rest of the "skeleton" was also pieced together using aluminum wires and Polymorph, with a piece of hard foam filling out the chest area to reduce weight. 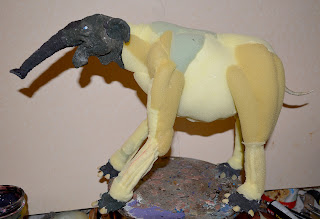 The whole body was padded with small bits of soft polyurethane foam cut in the shape of muscles and overlapped in a way that imitates the muscle diagram of a modern elephant. 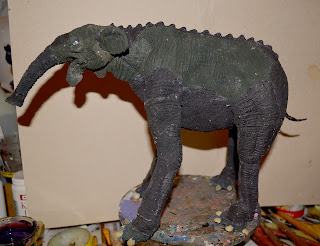 The same type of patches of cast skin used for the trunk and the ears also covered up the foam padding. The poem gives the animal a sort of saw-ridged back, wich I made with cotton dipped in latex. 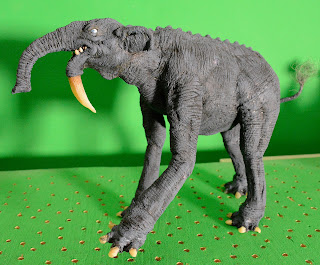 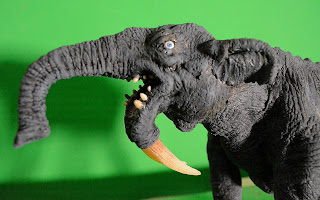 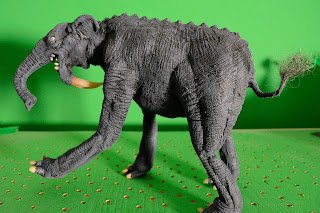 The finished Deinotherium was dry brushed with tinted latex using a foam sponge. The tusks were latex casts created in a plaster mold and the teeth were a latex and cotton blend. I should also say that the doll's eyes were placed in latex cradles cast around the eyes. The cradles were lubricated with Vaseline and the orbs were animated by pressing a pencil eraser against them, making them move slightly between frames. 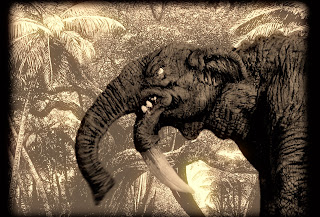 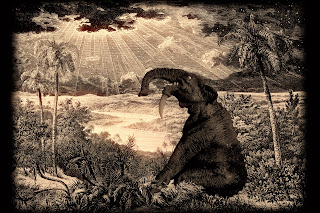 The style of this film is an imitation of the look pioneered by Czech filmmaker Karel Zeman, where  2D backgrounds in the style of 19th-century etchings are used and integrated with live-action and stop-motion elements. 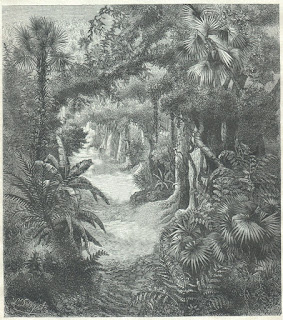 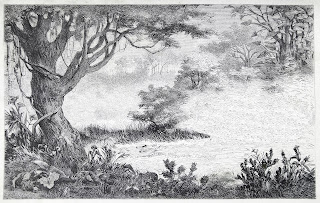 I simply downloaded real etchings from stock image site Depositphotos, did a bit of tinkering with them in Photoshop and added the images in After Effects along with my animated Deinotherium puppet. Also in AE I added a filter simulating old, flickering film stock, as well as the sepia coloring. 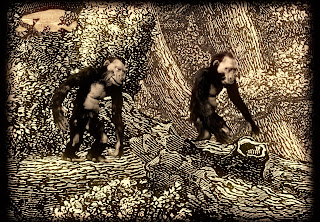 There are two other puppet characters in this film, and that's a couple of apes inhabiting the tree that the Deinotherium moronically climbs and topples. They're the same puppet animated twice, and it was originally built for the film "Memory", based on a prose poem by H P Lovecraft.

"The Dreadful Deinotherium" seems to have been pretty well received by my tiny but dedicated YouTube audience. Some have asked if I'm going to use this look for another project, and I might, but it's also a look that can grow old (no pun intended) pretty quickly if not used effectively and with the right motivations.
Posted by Richard Svensson at 12:48 AM No comments: