Yet another monster for my collaborative (as of yet nameless) fantasy film project with John Hankins. If you're making a film filled with Dungeons & Dragons monsters, you can't do it without the infamous "Beholder"; a floating, gnashing monstrosity, which is more than an awful eyeful. 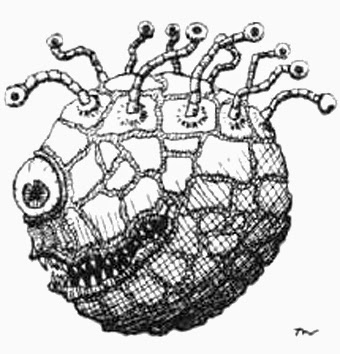 Here's how the Beholder was originally depicted in the first "Advanced Dungeons & Dragons Monster Manual" from 1977. There have been much scarier, more detailed illustrations since then, but because John and I are trying to recreate an innocent retro feel for our project, this is the design I based my puppet on. 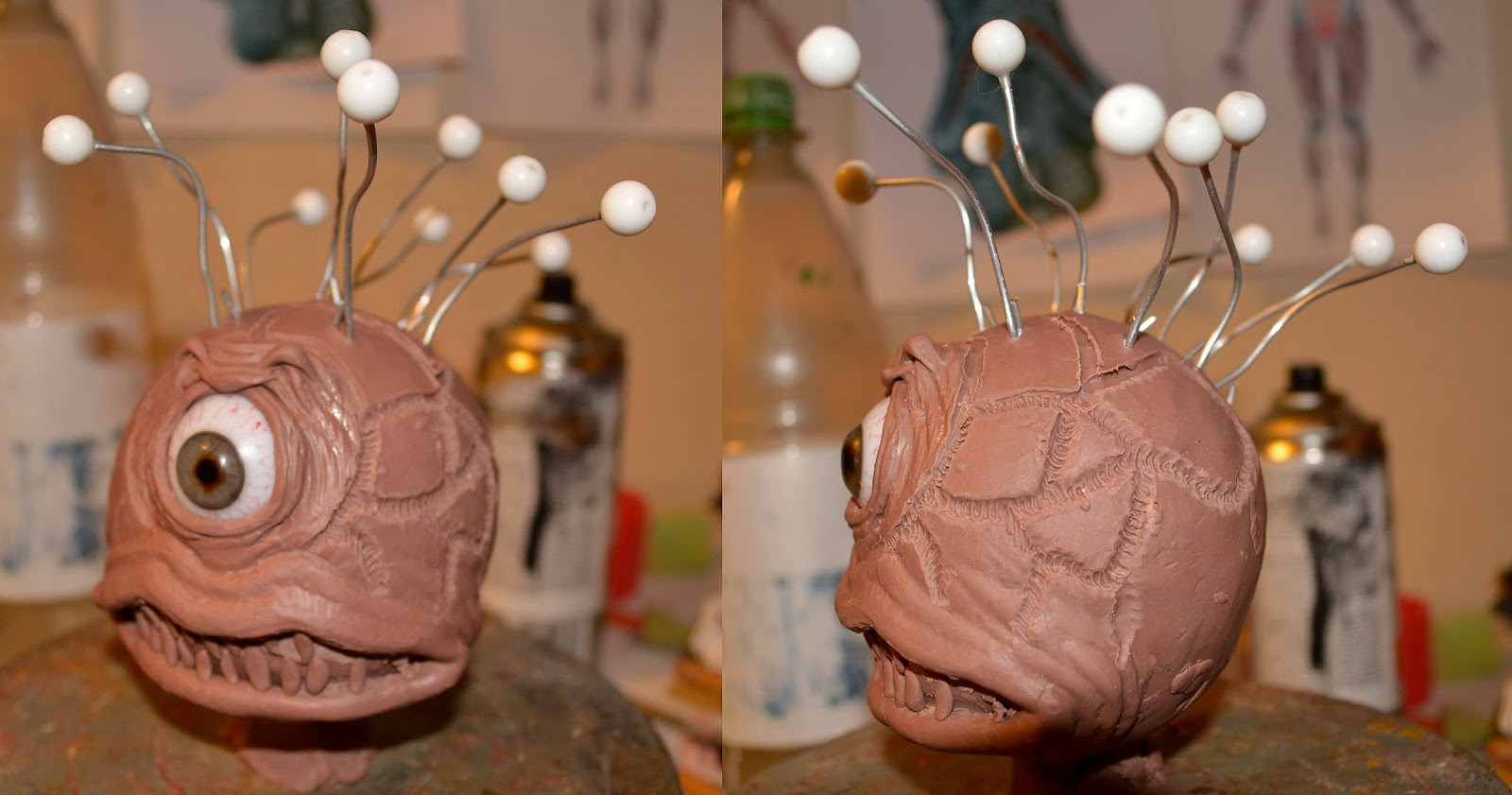 This is my first rough clay sketch of the beholder, something John and I could discuss. As it turned out we went with this design with very little alterations. 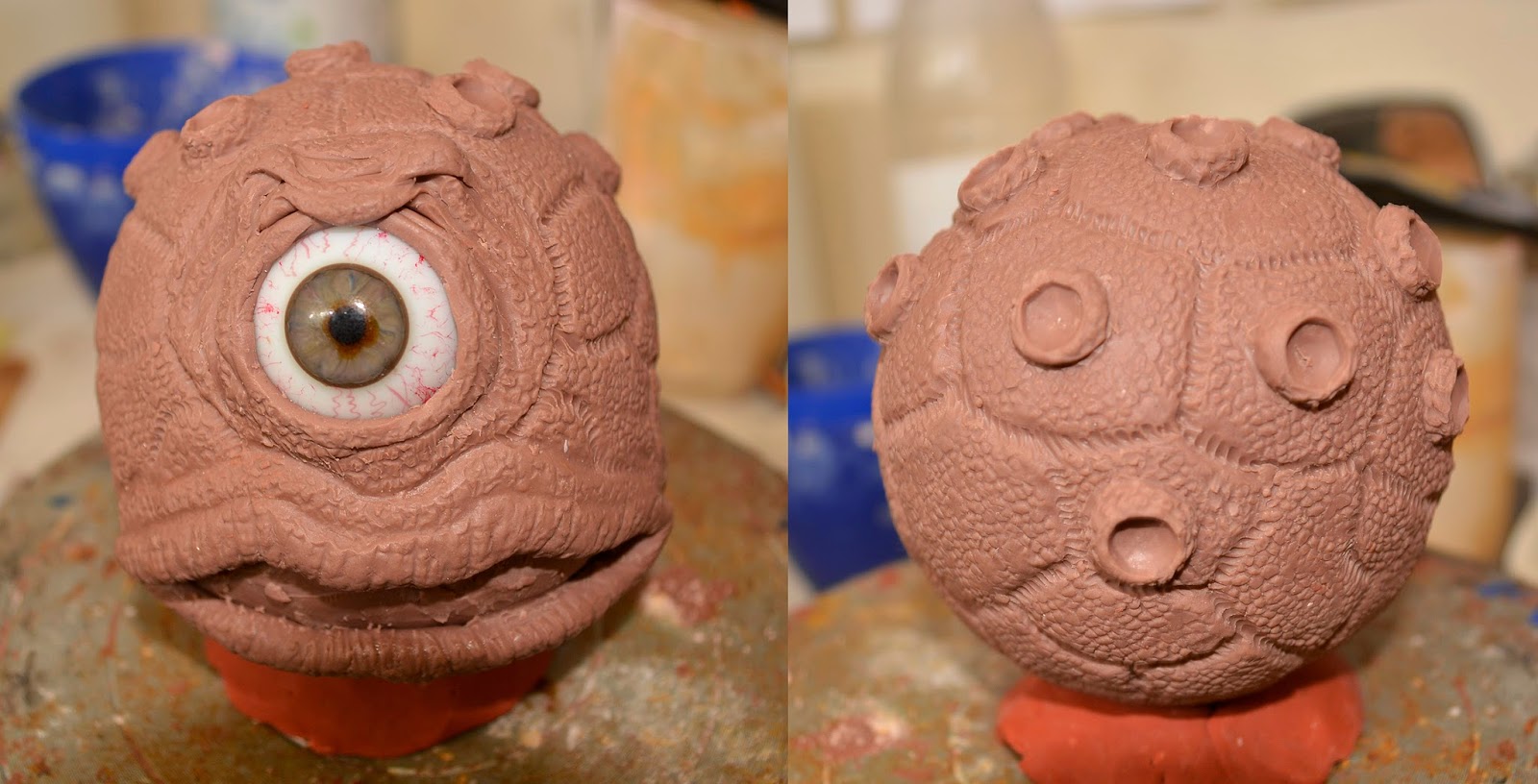 Here's the finished clay sculpture, executed in Monster Clay. The eye stalks are not there for the casting, as they will be added at a later stage as built-up features. The holes for the stalks are there, however. The big watery eye comes from a discarded mannequin. I added some extra blood veins and covered the whole thing in transparent lacquer. 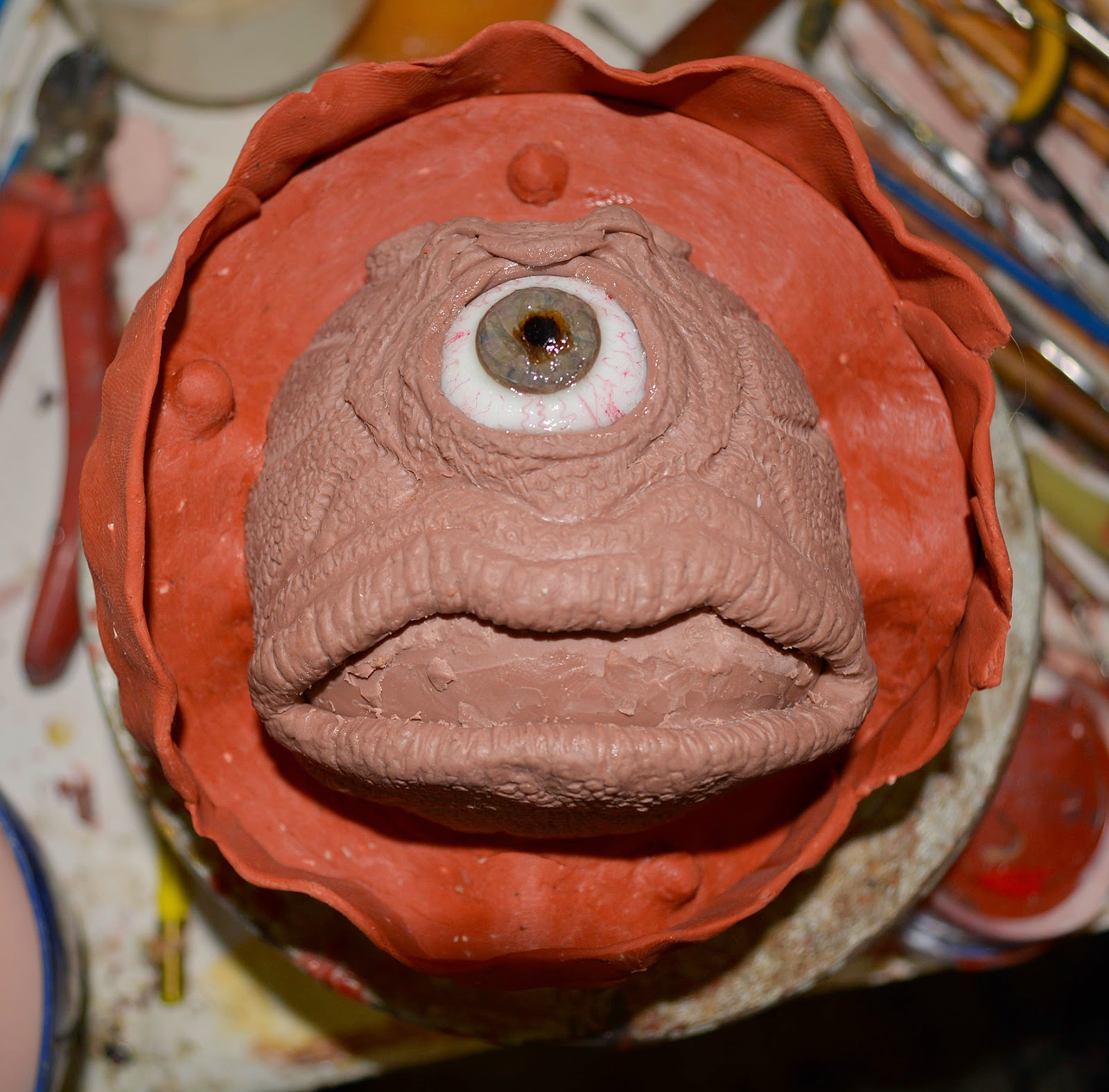 I cast the sculpture in a two-part mould. It's a slight bit of a hassle, so I don't do this very often. Half the sculpture is walled off with a softer clay simply called "plastellina" here in Sweden, but it has nothing to do with the famous Roma Plastillina sculpting clay. As you can hopefully see I've added three small bumps in the clay wall.These will become "keys" in the plaster mould, helping to interlock the two mould halves. 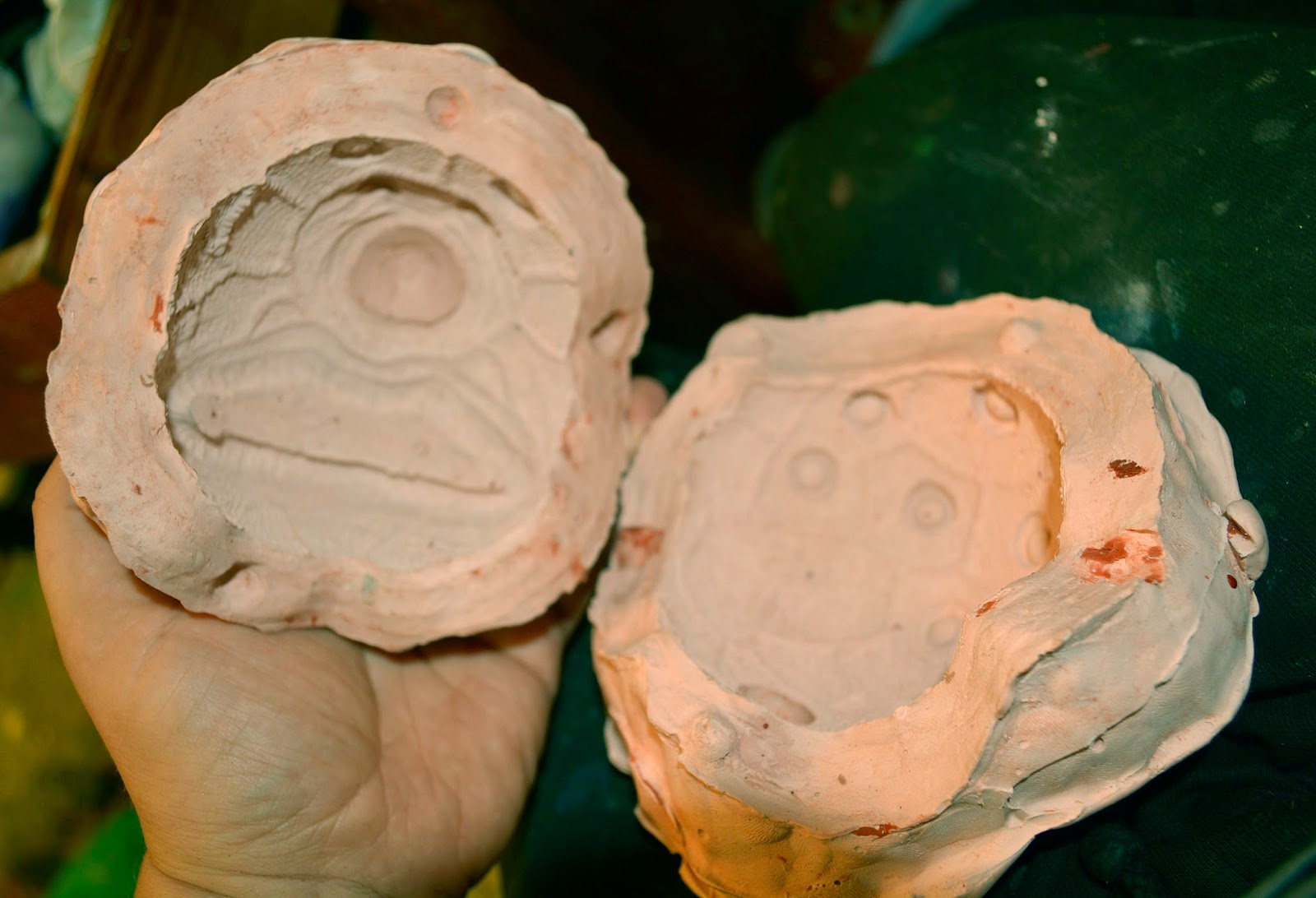 This is how the two-part mould turned out. Monster clay comes out easily from plaster moulds, but you can see some brown residue from the softer "plastillina". 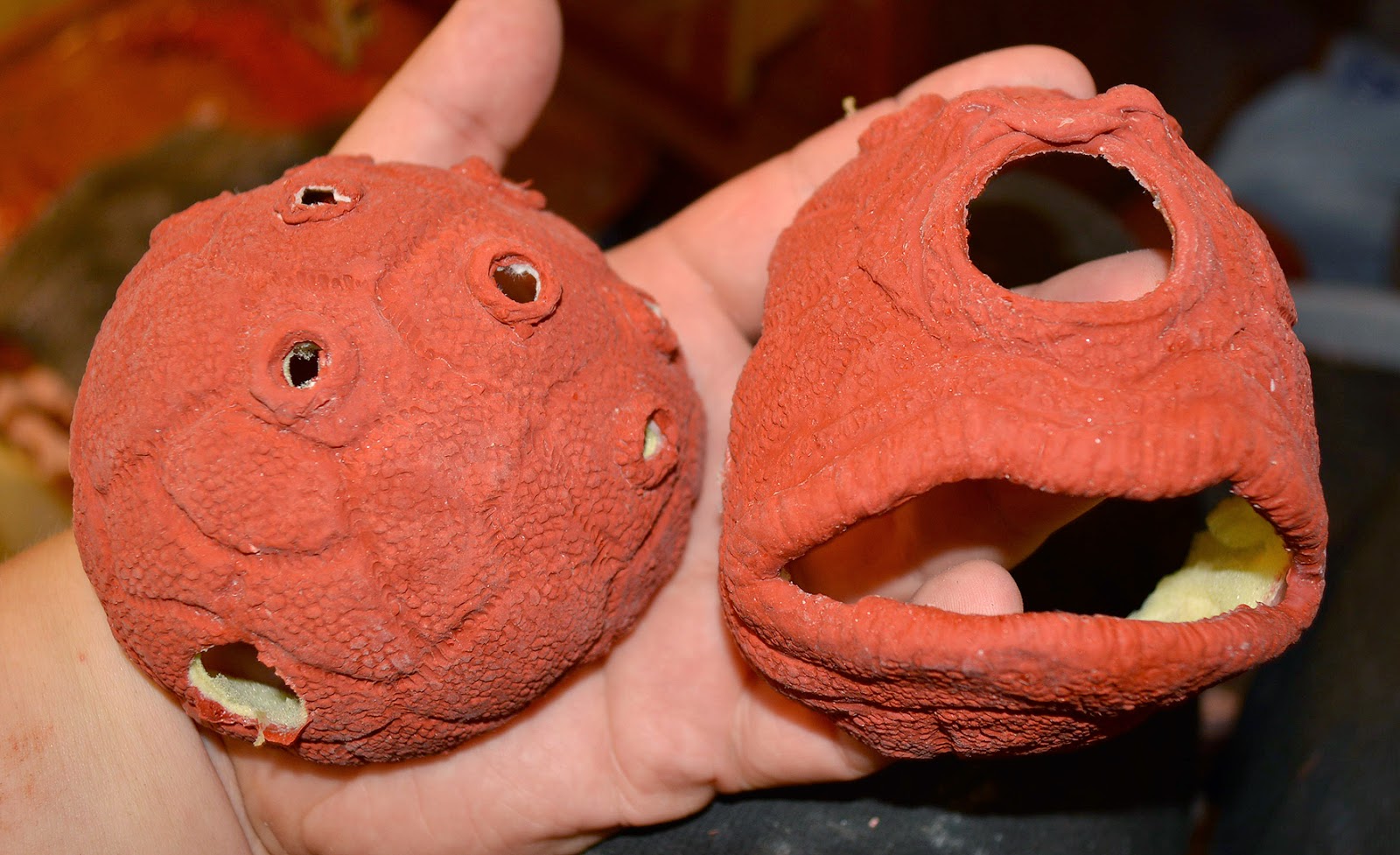 Ordinary liquid latex is tinted with universal tinting colours and dabbed onto the inside of the plaster mould halves with a sponge. Four layers of latex was added this way to build up a sturdy, but not too firm latex skin. I went with a rust red/brown hue, which will form a good base for the additional layer of colour going on when the whole puppet is finished. 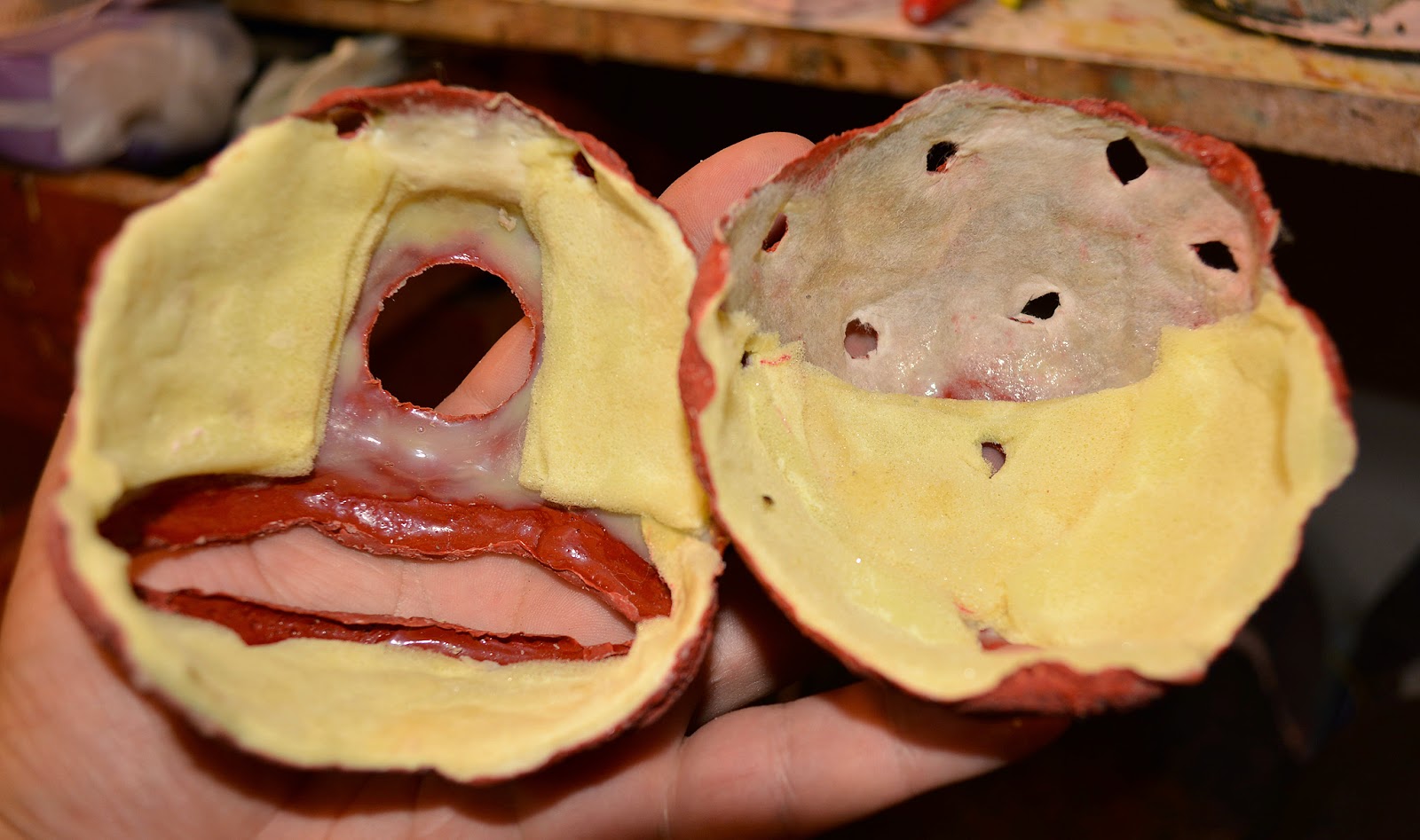 Here's the important detail, though. The insides of the latex puppet halves are lined with thin sheets of foam rubber. This will add support without making the latex skin too leathery and still allowing some stretch. 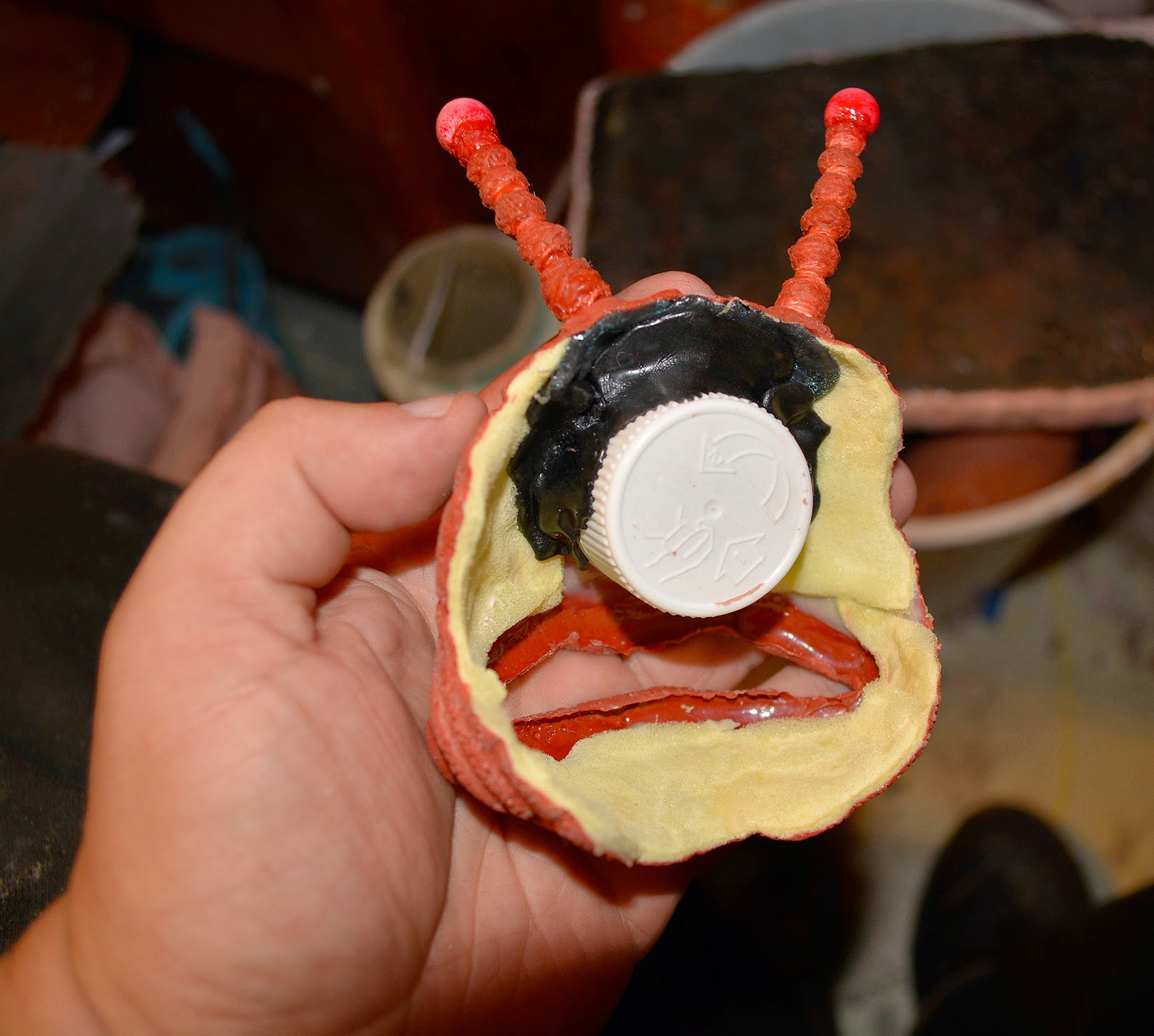 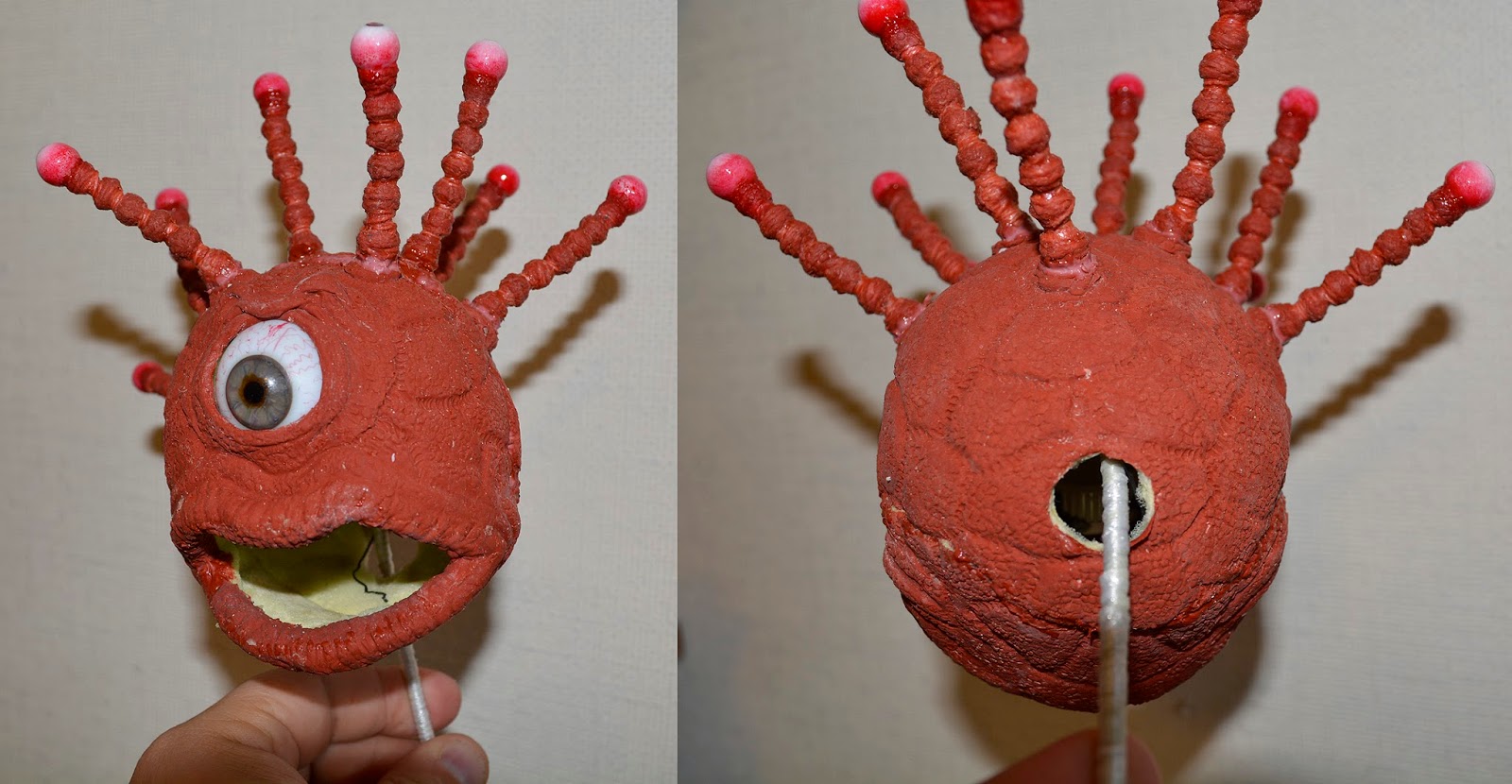 The two body halves are now joined together with contact cement, and the join is covered with more tinted latex. A thick but bendable aluminum rod has been added to the screw cap using more Friendly Plastic. This rod is a support to keep the "floating" puppet aloft while being animated. I've covered the rod with soft string, which will ease the application of the green screen paint, which will be added later. I've also added a looping piece of string wrapped aluminum wire to the insides of the lips. 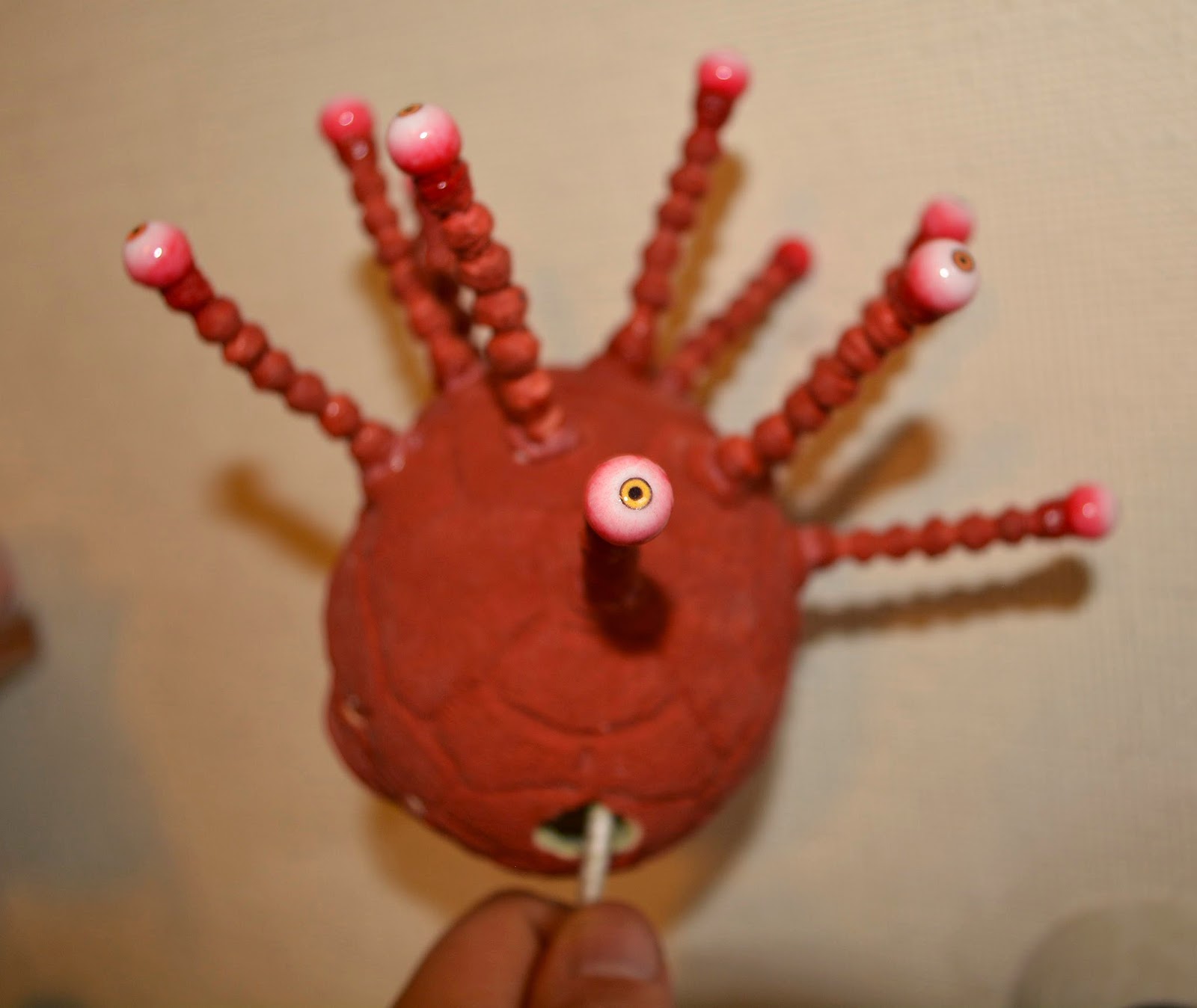 The eye stalks are aluminum wires covered with soft string, and then tinted latex. The eyeballs are plastic balls used to make "pearl" necklaces. I've ground down a flat area on top of each ball, where a printed photoshopped iris image has been added. The eyeball is then covered with Glossy Accents, which is a transparent, slightly rubbery air drying plastic used by scrapbookers. 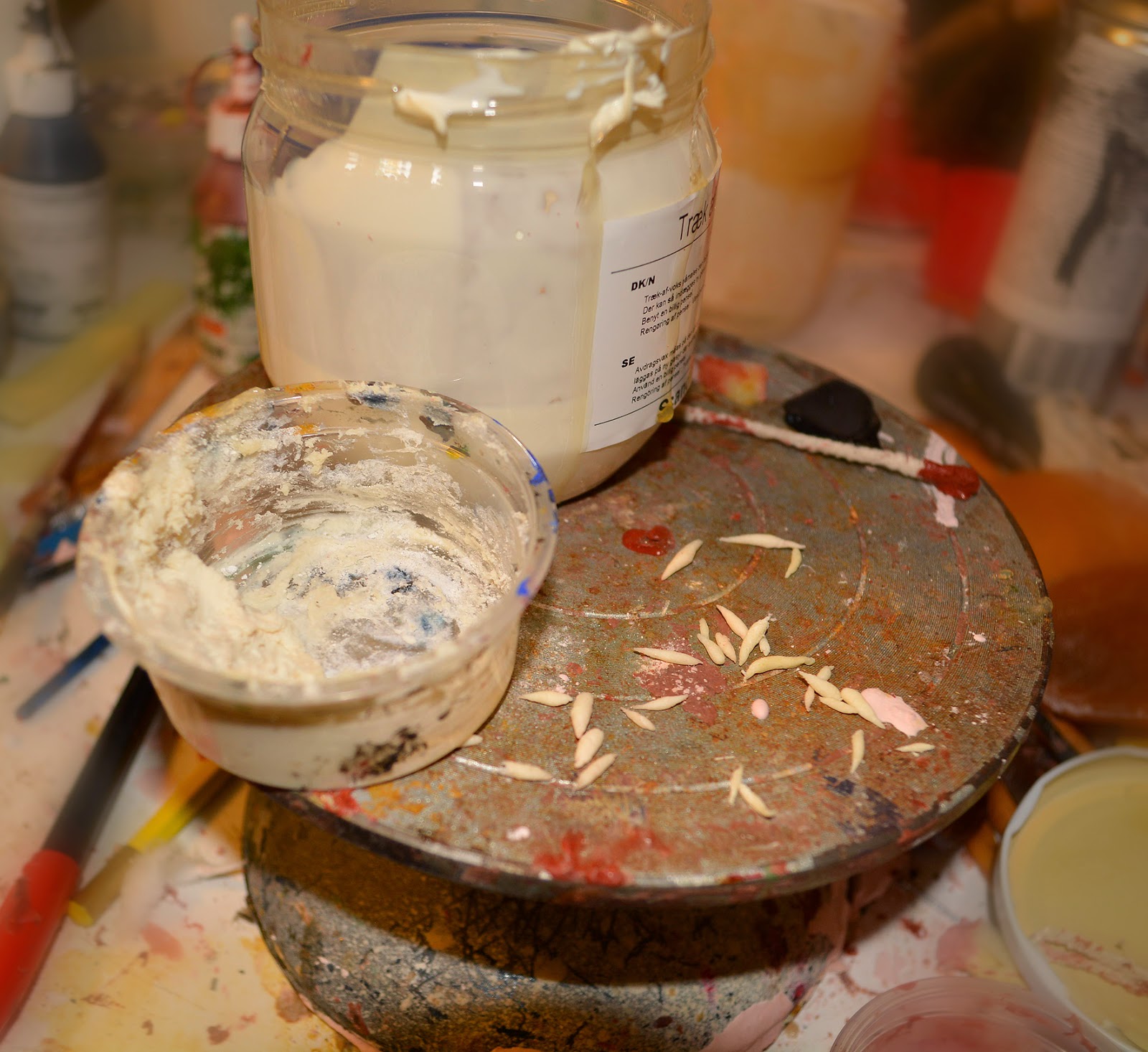 Time for teeth! These are simply made by mixing latex with cab-o-sil (fumed silica), which creates a butter-like latex paste. Rolling this paste between your thumb and index finger will create small, pointy, flexible, bone-white bits, which dries quite fast in normal room temperature. 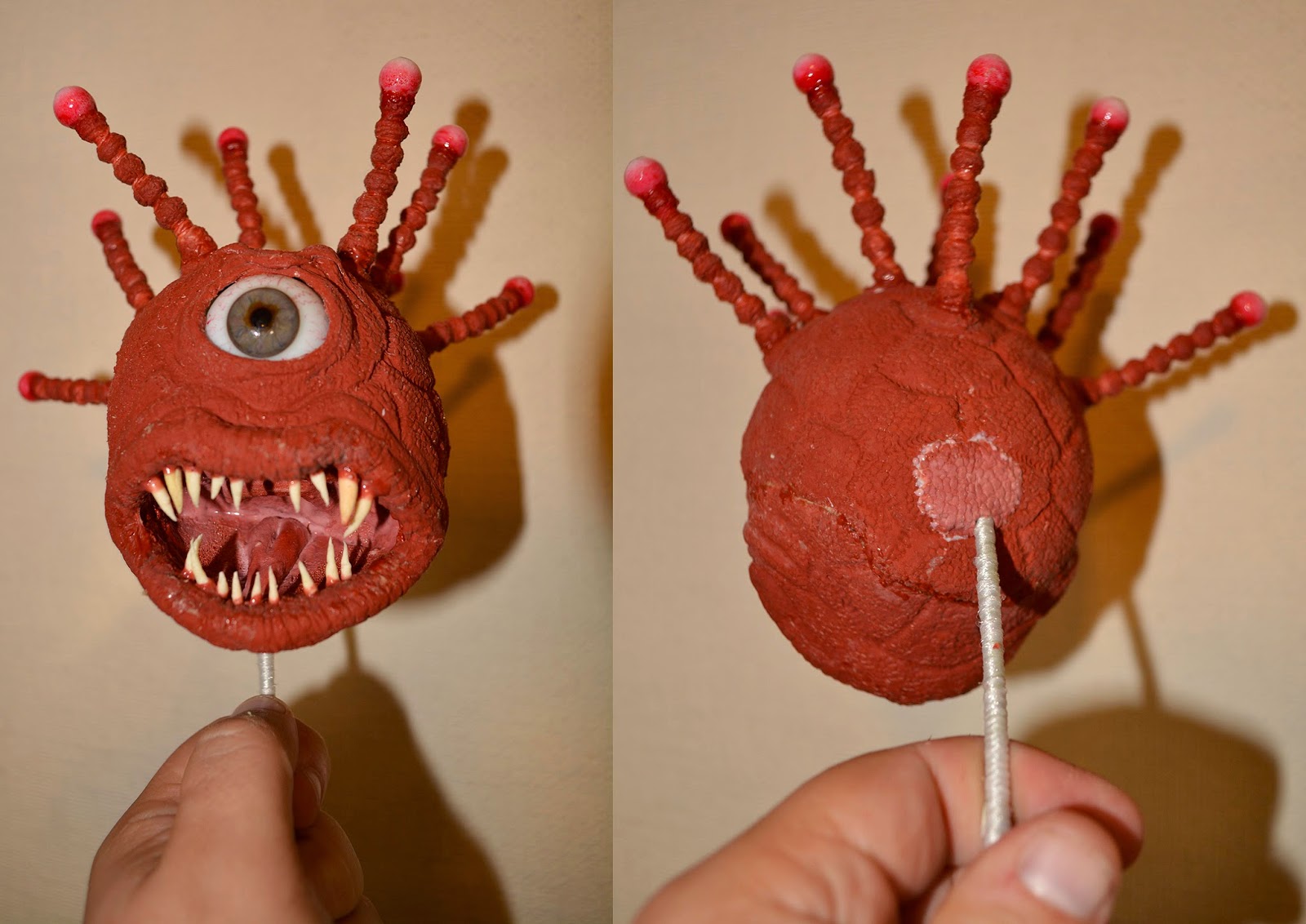 The teeth are stuck to the mouth using tinted liquid latex, and the hole in the puppet's bum is covered up with a cast latex skin patch. The inside of the mouth is created by contact cementing two pieces of thin urethane rubber to the inside of the mouth cavity above the lips, and covering these with cotton shapes and tinted latex. 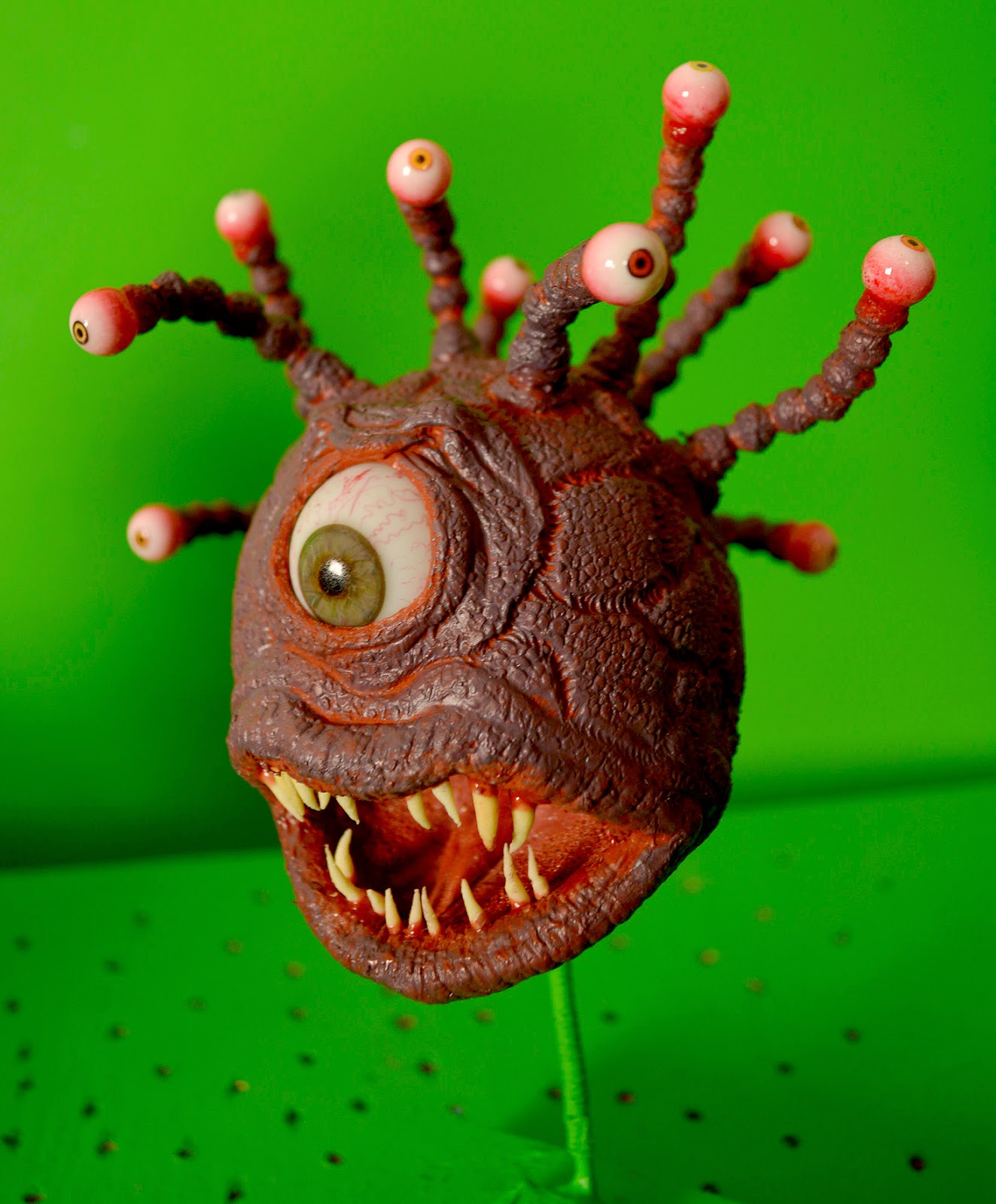 To finish the puppet a thin layer of purple PAX paint is sponged on over the puppet, taking care not to over apply and cover up the various wrinkles and crevasses on the puppet body. 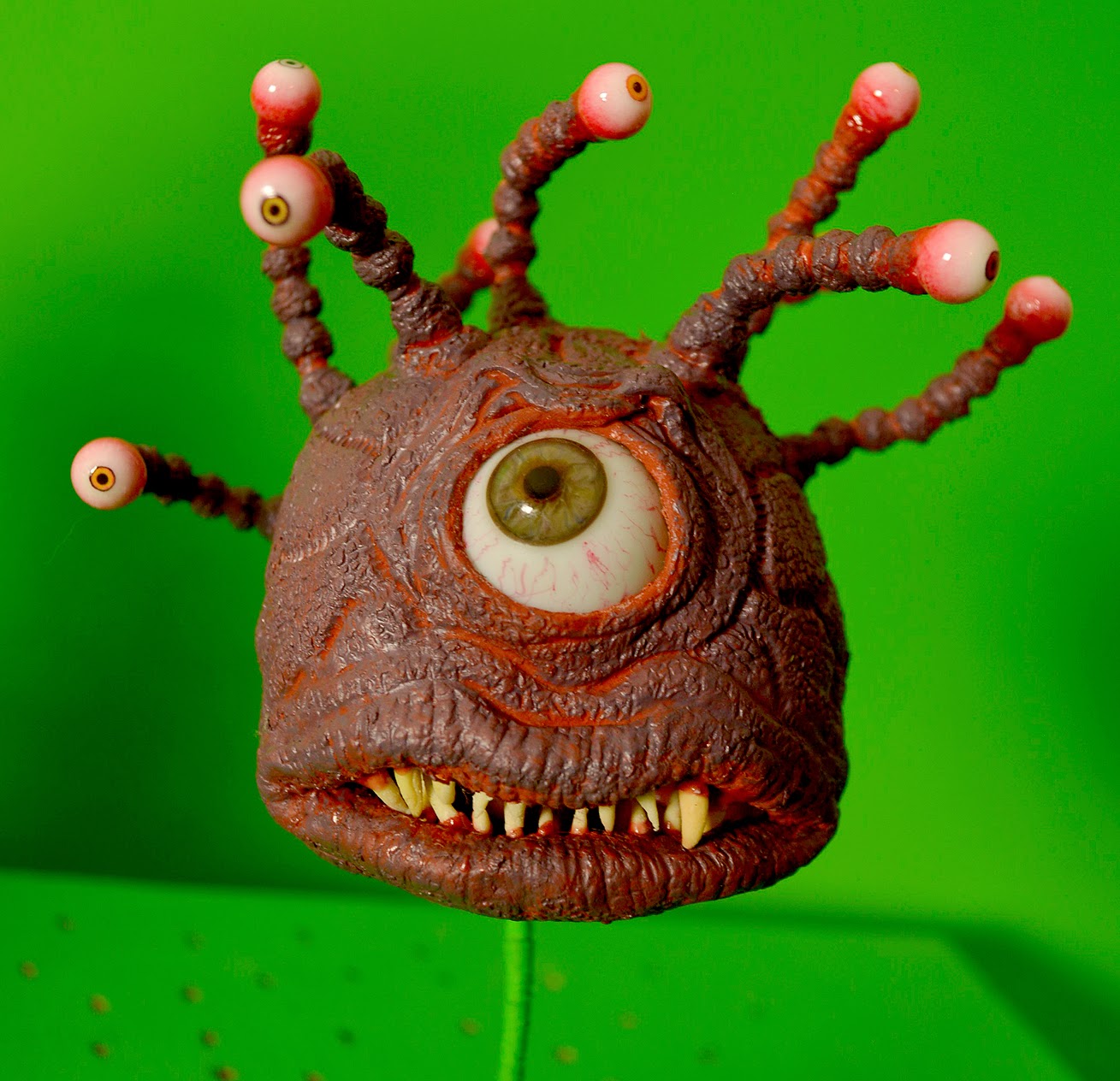 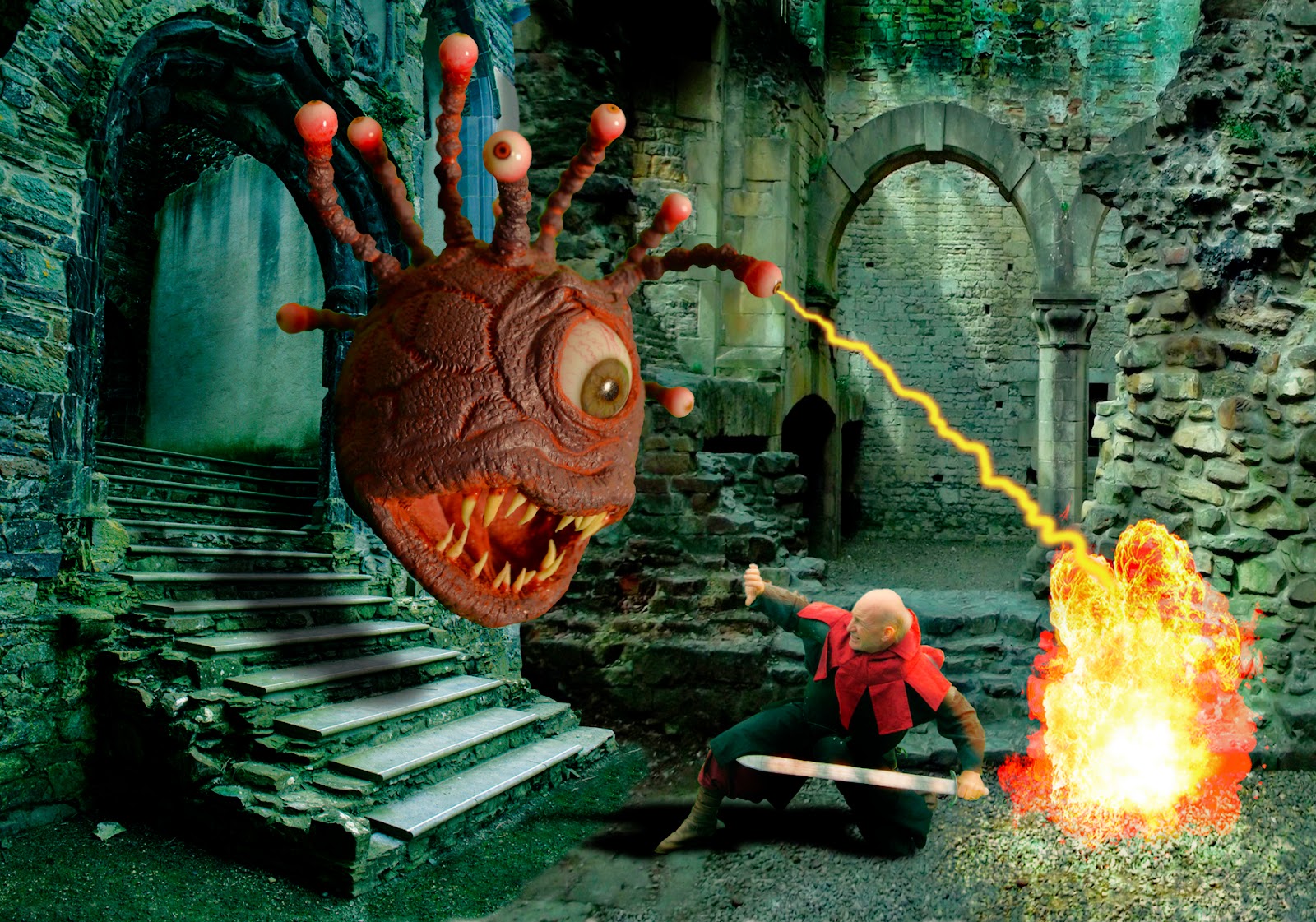 Hopefully, John's encounter with the Beholder will look something like this. Beholders are among the "boss" creatures of fantasy gaming, so they're not just ugly; they're smart too. They're also able to fire various nasty energy emissions from their eye stalk eyes, so it's a meeting between hero and monster full with exciting possibilities!