Go Down the Woods Today..

For quite some time I've been thinking about doing stop-motion recreations -of sorts- of weird creatures people claim to have met; cryptids, aliens, etc. I finally got around to it sometime around last September, when I decided to take on one of the very strangest encounters. 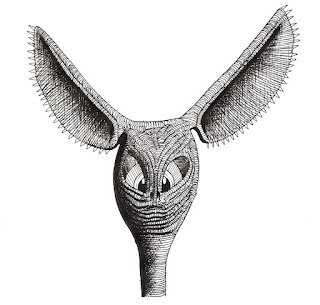 The above two sketches are reconstructions of what bow hunter Jennings Frederick says he encountered in 1968 during a stroll in the woods of Fairmont, West Virginia. According to Frederick he suddenly heard a strange grating sound and felt a painful sting in his neck. A strange, green spindly entity was standing next to him, poking him in the neck with its finger. A voice (maybe in Frederick's head) told him: "YOU NEED NOT FEAR ME. I WISH TO COMMUNICATE. I COME AS A FRIEND. WE KNOW OF YOU ALL. I COME IN PEACE. I WISH MEDICAL ASSISTANCE. I NEED YOUR HELP."
After this short ordeal Frederick's was apparently let go and the creature disappeared into the woods. The flabbergasted hunter noticed that a line of blood trickled down his neck and he concluded that was what the alien stranger accosted him for. He then heard a strange sound which he surmised was coming from the creature's craft, whatever that may be. This very strange story has become something of an odd favorite among people interested inthe unexplained. 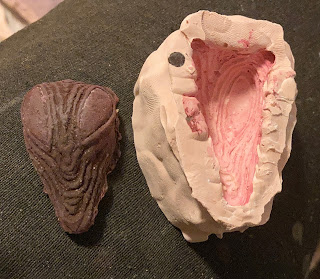 To make my vegetable man puppet I sculpted two pieces in clay and cast them in latex from dental plaster molds. The first was the head, or, more precisely, the face.

The second piece was a bit of bark-like skin texture, from which I could cast the bits of skin that would cover the puppet.

I made this pupper large, almost 40 cm tall, so I could make the limbs really thin. I used 1,5 mm aluminum wires reinforced with thin, but rigid, metal rods for the hard skeletal parts between each joint. A tight wrapping of crochet yarn soaked with latex held everything in place with the help of some Polymorph thermoplastic. 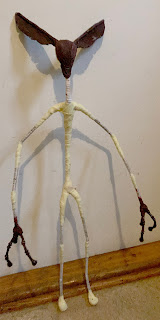 Though the creature was supposed to be very stick-like I still added a few spots of muscular detailing by soaking thin bits of polyurethane foam in latex and pressing those onto the body. 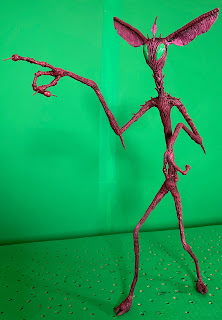 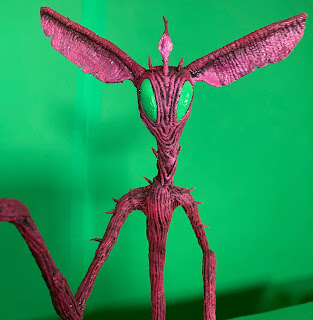 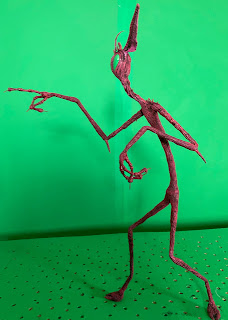 In the report, the creature is a dull green, but since I'm shooting against a green screen I painted the finished puppet red. The eyes were kept a chroma key green, so I could key those out and add animated eyes instead. 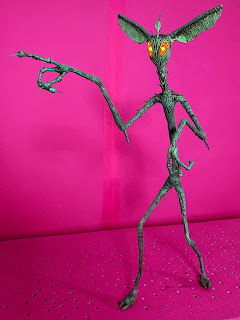 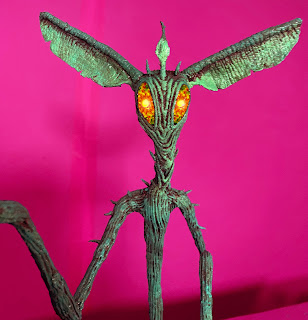 In After Effects I could then change the color of the puppet into green and also remove the eyes. 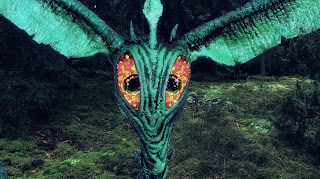 I used a caleidoscopic CG animation stock footage clip for each eye, which I think created a nice hypnotic effect. 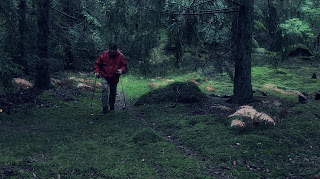 The film was shot at a forest about 20 minutes walk from where I live. It was absolutely pouring down this day and both I and my single actor were soaked through after a while. 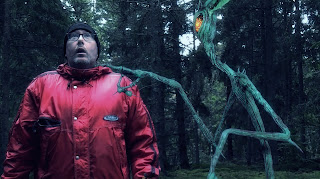 This actor, by the way, is Leif Hult, who is also quite an accomplished singer. He suffered through the gloomy afternoon and even dropped to the ground in the wet moss in one scene. The puppet was animated to interact with his movements. 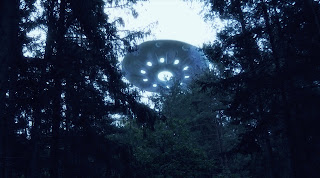 At the end of the film it's revealed that the creature is actually an alien, and Leif watches it take off in a flying saucer above the trees. I tried to film the tree tops without having the rain completely soak my camera. The UFO is another CG animation downloaded from Storyblocks.com as a green screen shot. I composited it into the sky above the forest by creating a matte from the trees. I used a contrast tool to make the trees completely black and the sky completely white. After Effects then allows you to place your original footage in a layer above the contrasted footage and using it as a matte, which makes the trees a layer without the sky. A third layer with the sky is then dropped under both these layers. It sounds a bit complicated, but it really isn't. It's actually a very old effect that's been used since the silent movie era. Back in the day it was a chemical process created with an optical printer, or by reversing the shot in camera and running the footage twice through the camera gate. Doing it digitally is, of course, much, much easier. 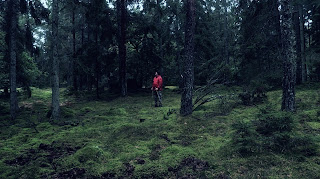 As you saw in my version of the story, Leif isn't a bow hunter. He's just a guy out for a stroll in the woods and happens to encounter this creature. I did, however, use what the creature said verbatim. It seems this film was quite appreciated by my YouTube audience, and I was encouraged to do more projects of this kind. Since there are almost countless similar weird encounter stories from all over the world to pick from I will get back to the subject eventually.
Posted by Richard Svensson at 10:23 AM 33 comments: