As I've mentioned before, sometime around 1999/2000 I was involved in an amateur musical film project based on J R R Tolkien's Lord of the Rings. This project was actually, believe it or not, endorsed by the Tolkien Estate. Due to creative differences the project drifted apart and nothing came of it. However, during these later years I've revisited video footage shot during the project and put together my own short films. This latest effort features Niels elley, who is an old friend of mine, and a sculptor, stone cutter and artist.
I made a big crepé hair beard and mustache for him, and used a wig actually made from real human hair. About half of it was shot on location and half in front of a green screen. 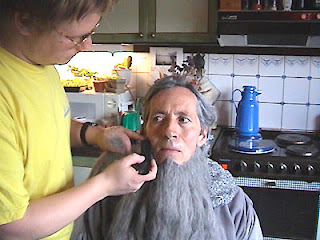 Gandalf taking a leak behind a tree (even wizards gotta go..)
Posted by Richard Svensson at 3:43 AM 3 comments: