A while ago, I was contacted my Mary Engholm, a costume-making friend of mine. She's working on a Swedish musical stage adaptation of "Beauty and the Beast". She had designed the beast, but needed help with making the actual mask, claws and feet for the character. I saw this as an opportunity to try out making a silicone mask, something which is a bit more complicated than my usual latex masks.


Mary took a plaster cast of Tommy, the singing dentist playing the beast, and sent it to me. Over that, I sculpted a cat-like face after Mary's design (cat faces seemingly being the norm in adaps of this tale). 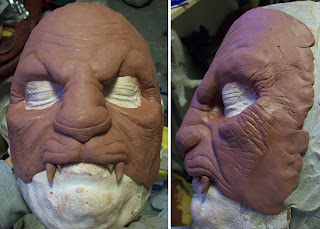 An Ultracal 30 plaster mold was created over this sculpture and the clay removed from the cured mold. Now, the silicone mask was created by first brushing a thin layer of  Dragon Skin FX silicone into both the mold and over the cast of Tommy's face. A new batch of silicone was then mixed with "slacker", a chemical which makes the silicone very runny. Some skin-colored pigments were also added to the mix, which was then poured into the mold. The face part, often called "the plug" by the pros, was pressed into the mold, making the silicone mix run out and into all parts of the mold. After about an hour, the silicone cast could be removed, now having a fully cured, but very soft and jelly-like consistency. I added some extra paint to the mask, mixing "psycho paint" (from SmoothOn.com) with red and brown pigments and sponging it on in thin layers. I also added some mutton chops with fake fur. This face mask, with a pair of silicone ears, was stuck onto a silicone face cowl. The whole contraption could be pulled over the head, fitting snugly and not need any glue to be kept in place or to respond to facial movements. I tried the mask on with a wig that Mary sent me. I have a big head, but Tommy's head is even bigger, so my fit wasn't perfect. 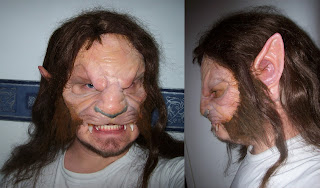 It does, however look better on Tommy: 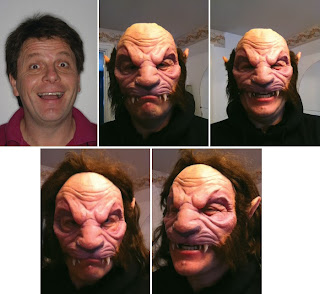 Mary will probably add more hair, especially a pair of eyebrows. It'll be fun seeing the finished beast in full costume. This musical is produced by a small stage company in the south of Sweden. The show will probably premiere in March or April, 2011. I hope I have an opportunity to see it.
Posted by Richard Svensson at 7:21 AM 6 comments: