Dracula on the stage 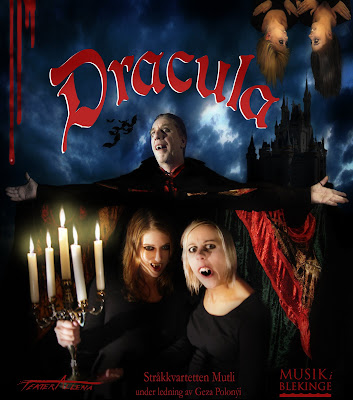 I was contacted by my friend Lars Åkerlund in the fall of 2007 about making props for his stage adaptation of Bram Stoker's Dracula. I knew I wouldn't want to miss out on that, since Lars always manages to do clever, funny and thought-provoking stuff. This was not going to be any ordinary Dracula. And quite right I was. The whole stage is draped in black and the whole show is staged by candle light only. Lars, his daughter Maja and my friend Malin acts out all the roles in various ingenious ways. The play premiered in October 2008 and has been playing to great reviews.

My job was to make 23 vampire skulls, one for each show. This version of the tale ends with van Helsing smashing Dracula's skull after the vampire has disintigrated in the sun. The skulls were cast in SmoothCast 325 plastic from a silicone mold. Each skull was cast as thin a hollow plastic layer as it was possible to make it, without breaking the skull while wriggling it out of the mold. It worked most of the time. 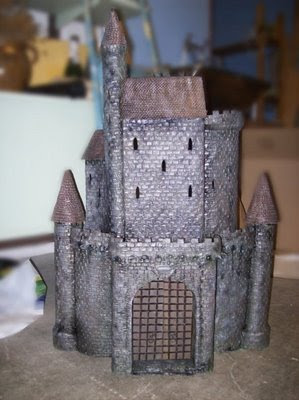 A model of Dracula's castle. It can be seen in the background and originally the vampire's eyes were supposed to peek out through the gate as he welcomes Jonathan Harker. But that idea was eventually scrapped. The castle is actually made out of stiff cardboard, covered in latex skins for the stone-wall textures. It was done VEEERY cheaply and quickly, but it does the trick on the candle-lit stage. 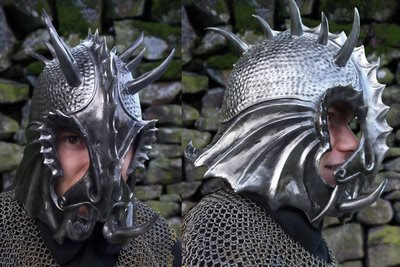 Prince Dracula's dragon helmet, here modeled by my pal Martin. The helmet is also made in SmoothCast 325 plastic. The play starts off in medieval times, before Dracula was made a vampire and the helmet was meant to mirror the monster he later becomes. The real life Dracula was a knight of the Order of the Dragon.

I also made two stick-puppet rats with glowing eyes, the poster, the program and various other stuff.
Posted by Richard Svensson at 2:27 AM