Empire of the Robot Monsters part 2 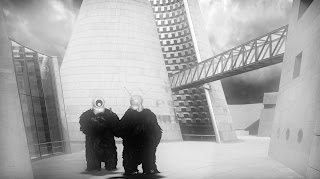 The planet of the Ro-Men is depicted as being a mix of primordial and industrialized. Well, the barren wilderness was easy to represent, using a moonscape from Depositphotos, where I find most of my stock images nowadays. I have a subscription that allows me to download 30 images per month. All images are high resolution and therefore perfect for creating backgrounds for my films. The cityscapes of the planet took some thinking, though. Eventually, I decided to pillage the brutalist architectural achievements of, mainly, the Eastern block. I thought that the looming concrete monoliths of that design movement would fit very well with the matter of fact mindset of the Ro-Men. Besides, I also happen to think that some of these buildings are quite decorative in their brutally plain honesty. 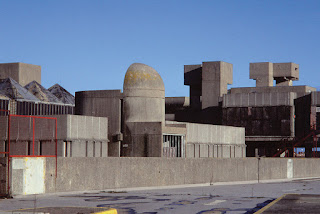 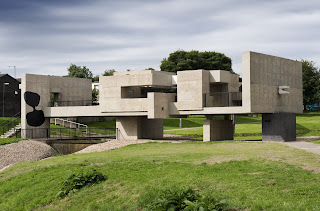 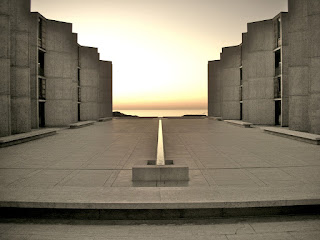 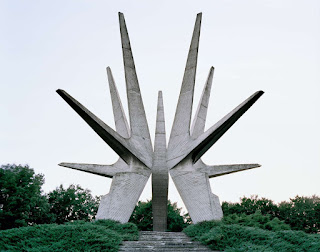 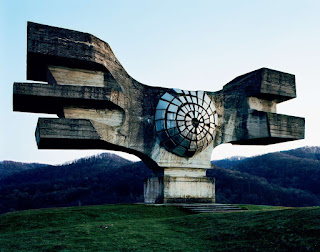 Some examples of the Brutalist movement. Quite alien, I'm sure you'll agree. 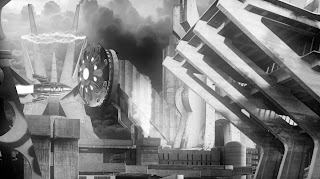 To create the cityscapes I simply cut out the elements I found interesting in Photoshop and added them in separate layers in After Effects. Adding some space between each layer using the 3D tool allowed for some slight perspective movement when all the layers were put in motion using a keyframed "camera pan" over the images. 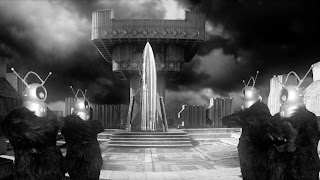 I also added some suitably gloomy skies as backgrounds. Those are all real skies, most of them sped up using time-lapse. I found my skied over at Videoblocks, where I also have a subscription. As an example of how the layers work, the image above contains five. Firstly we have the clouds, over that goes a Photoshopped Brutalist mishmash, the rocket, which I found at Depositphotos, is positioned in the next layer, then comes still images of the saluting Ro-Men, and lastly (though not visible in this still) comes an animated Ro-Man marching past his fellows towards the rocket. And it is, of course, a rocket, since the original "Robot Monster" is a 1950's monster movie, and the only way to travel through space in those days was via rocket ship. 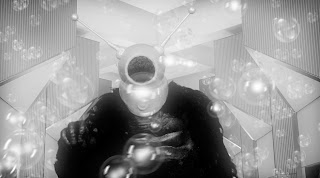 We also have some interior shots. Wherever I could find representations of the Brutalist movement in indoor architecture, I grabbed those images. Of course, you can't have a Ro-Man film without bubbles, so I added a clip I found at Videoblocks. 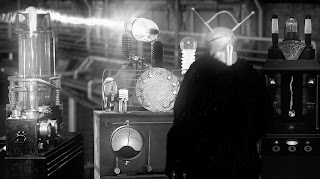 The shots of the Ro-Men's scientific experiments is another matter. To get the proper look of retro science I used stills old mad scientist movies and snipped out the best elements in Photoshop. Don't know how many copyrights I violated doing that, but I did stick to using promotional stills released by the movie studios themselves, and again, I found a bunch that was decidedly public domain over at Depositphotos. 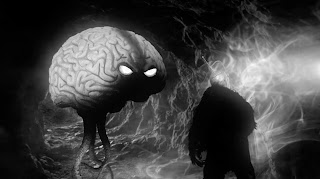 Here's a still from a scene that apparently resulted in squeals of delight from some old movie monster fans -The brain from planet Aurous (from the movie of that title) meets a Ro-Man and gets zapped. The brain itself was another stock image download, but the look of it was modified in Photoshops and eyes were added. 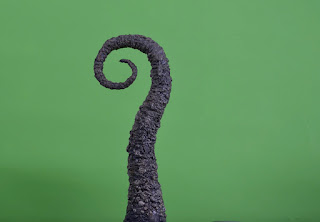 The three tentacles under the brain were just the one tentacle, animated a couple of times snaking about.

I think that's a decent summary of what might be interesting about this part of making the film. I will return to the world of classic movie monsters, but I'll stay well clear of the more famous, studio-owned properties, as I don't want my videos pulled down because of copyright claims. But there's a wealth of cult-status creatures out there, some of them even public domain, that I feel should be given a second shot at the limelight.
Posted by Richard Svensson at 1:34 AM No comments: