While working with our RPG world film, John and I kept adding more and more of that vast menagerie of cool monsters, until we realized that we could go on with the creature encounters without really getting on with the story. Even so, here comes yet another ugly brute!
I decided that having these classic monsters and not creating a Ray Harryhausen-style monster brawl between a couple of them would be a sin indeed. Thus the owl bear now makes a second appearance, and encounters a foe to grapple with, namely one of my favourite D & D monsters: The umber hulk.

Again I looked to the original first "Advanced Dungeons & Dragons Monster Manual" from 1977 for inspiration. There, the umber hulk is a slightly comical monstrosity that looks like a cross between a beetle and an ape. It's got two sets of eyes, huge mandibles and a burly body. What's not to like?? In later monster manuals the creature has been given a big makeover, and though it may look cooler in terms of the number of details, I think it has lost some of its charm and personality. My umber hulk puppet would turn out to be a cross between the cherished original concept, and my own added details.

I sculpted the head in Monster Clay, but soon realized that I was making it way too big if it was going to tussle with the owl bear. So I sculpted a new head, which was slightly smaller in size. 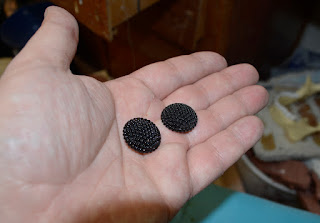 As you can see, the smaller set of eyes were small smooth beads, the bigger insect eyes were a pair of plastic buttons with a knobbly surface. I found these, and lots of other buttons suitable for both puppet eyes and other decorations, at a local sewing machine shop. 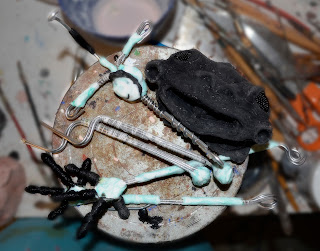 The head was cast as a loose latex skin from a plaster mould. Limbs were created by bonding together lengths of aluminum wires using sewing string. Friendly Plastic helped merge all the bits. Fingers were made by wrapping thick cotton string around aluminum wires and coating these with tinted latex. I'm thinking of making a stand-alone tutorial on building up hands and fingers, as a few people seem to have issues with this. 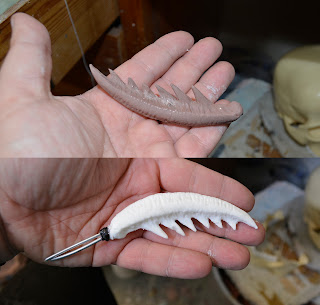 The mandibles were really just the one, sculpted in Monster Clay and cast twice in Smooth-Cast 300Q plastic, using a DragonSkin Pro silicone mould. Just before the quick-setting plastic gelled, I lowered a bit of folded aluminum wire into it to create a joint. 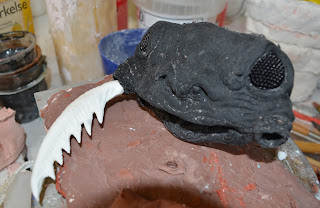 More Friendly Plastic was used to hold the mandibles in place from inside the head skin, as well as adding strength to the head. A piece of aluminum wire was also added to the lower lip, to make the mouth open and close in animation. 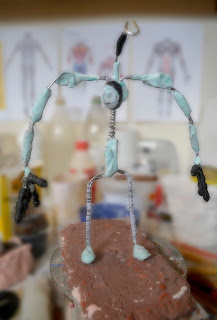 The armature in itself is, as usual, a straightforward deal. The aluminum wire and Friendly Plastic construction makes it very light weight. 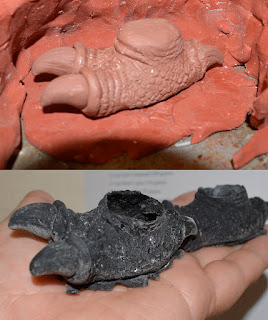 Besides the head, the feet were also sculpted in clay. It's actually just the one sculpture, cast twice in latex. The inside of these latex skins were padded with polyurethane foam and a cotton/latex mix. 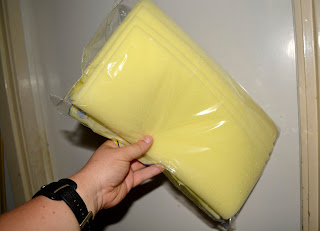 Some people seem to have problems finding thick, soft foam to pad the puppet body and create the muscles. As I've mentioned many times before I simply use old cushions and mattresses found at garage sales and donated by friends. But here's another alternative.
I buy thinner sheets of very soft foam used in kitchens to soak up moisture under drying racks. Usually, I use these for smaller puppets, or when I build up bulk on thinner limbs. 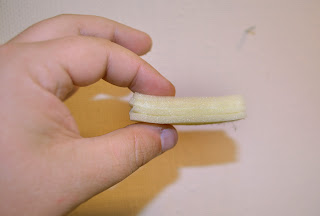 But you can also glue bits of this thin foam together. Four bits make up a pretty thick single piece, and you can thus decide exactly just HOW thick you'd like the bits to be. I use a very soft and flexible contact cement to bond the foam pieces. You can also use foam spray glue (which I can't get hold of in Sweden at the moment) or perhaps also rubber cement, which I haven't used in this application. 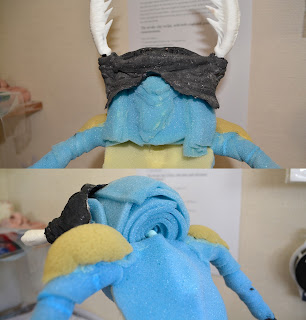 Here are two examples of the layered thin foam padding. You can create very precise shapes using this method, though it takes a bit longer than using bigger bits. 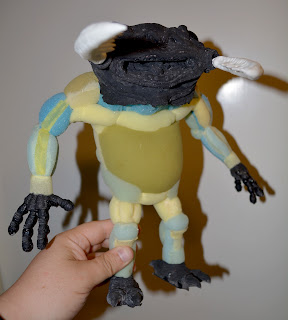 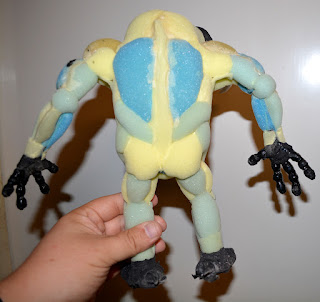 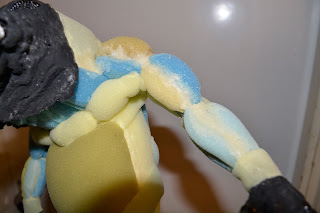 Here's the puppet with finished foam muscles padding. As you can see, I've used bigger pieces on some parts of the body. 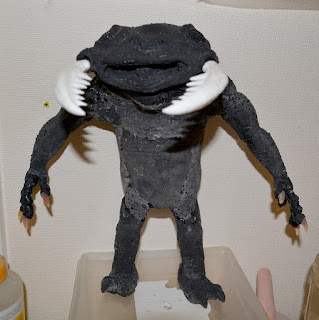 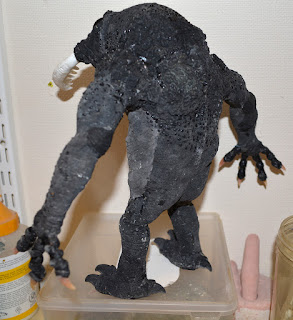 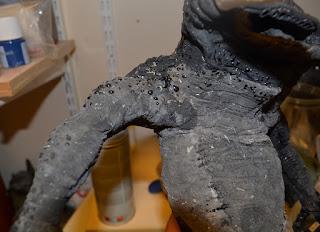 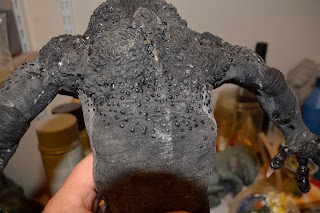 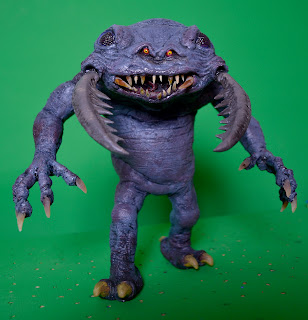 The finished puppet has received a uniform layer of dark grey using tinted latex drybrushed thinly over the surface of the body. Deeper crevasses have kept their black hue, adding depth and shadow to the character. More drybrushing, using lighter shades of blue grey and reddish brown, adds more details. Both sets of eyes are now covered with transparent scrapbooking liquid plastic. 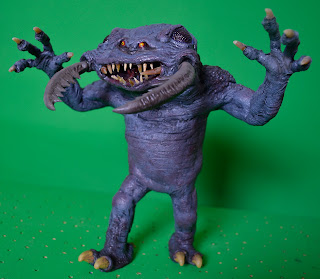 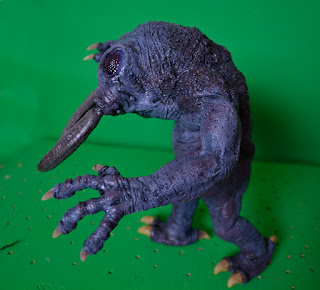 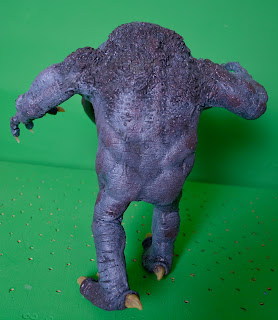 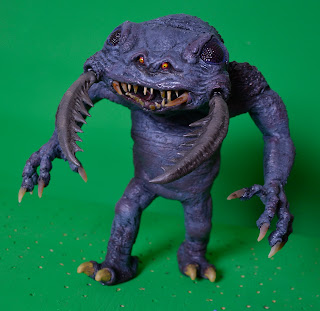 This puppet ended up slightly larger than I had preferred, but its still workable, and the umber hulk now provides the owl bear with a great wrestling buddy. Play nice, boys! 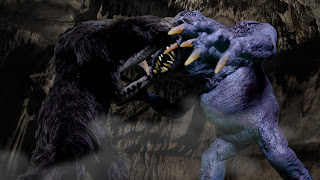 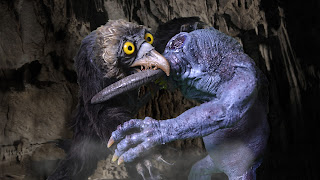 Posted by Richard Svensson at 8:07 AM 8 comments: