"The Sword of the Oceans"

Last year I promised my friend Daniel Lenner to help him out building props and doing modelwork for his Jules Verne-inspired film Wavebreaker , but I had no idea it would be such a dragged-out, energy-consuming event. The film is scheduled to get finished at the end of March. Then I'm finally off to finish some of my OWN projects. It's been mostly fun doing the stuff for Wavebreaker, though. But one thing seems to have been particularly gremlin-infested; the creation of a workable version of Captain Nemo's sub "the Nautilus". I first built a 3 feet long version made out of two joined plastic bottles, detailed with Apoxie sculpt. Just as I was getting the final shape sanded and finished for more intricate details, I dropped the damned thing on the concrete floor in my workshop and the model shattered into quite a lot of pieces. I discovered I had not taken any photos of the model prior to the accident and I had none taken after it, as I ran outside with all the pieces I could find and hurled them fuming into the trash can.

So what to do now? I remembered I had an old Revell model of the Hindenburg zeppelin stashed away somewhere. I found it and stripped it down to its very bare essentials, turned it around with its stern becoming the stem, and found that, yes; this could actually turn into a decent steampunk submarine.

I added some very minor details, as Danny's intention had always been to have a very sleek, rocket-like sub, much like the Nautilus from the original illustrations from the first edition of "20 000 Leagues Under the Sea", and not at all like the fish-like Disney film version. To create the famous ram of this fantasy sub I made plastic casts of a saw-toothed knife blade. While the plastic was still soft I pulled out the casts from their silicone molds and bent them slightly to fit the shape of the hull. I added a small command tower from a war ship model kit, reused a fin from the Hindenburg to make the rudder and added a big propeller from another old toy model.

And this is the finished result, painted with airbrush acrylics. The windows and portholes are a mix of clear plastic beads with flat undersides and casts made from Crystal Clear plastic. Now a bit of a problem arose. The original model was built quite big in order to photograph well. This little bugger, its substitute, is only little over 1 ft long. This meant that our original intentions of having it animated in very cool camera moves went out the window. Instead I asked Ola, the husband of a friend of mine, to take some good close-up photos of the model, that could then be cut out and 2D animated in After Effects. Ola is a pro photographer with his own studio and the photos he took really did the trick. Thanks, Ola!

The photos Ola provided already had the model against a pristine white background. Cutting it out and putting it against a solid blue background was therefore not a problem. I took separate photos of the propeller in three different positions and added those to Ola's photos. I imported the photos of the Nautilus into my StopMotionPro animation software and looped them. This created long sequences of shots of a hovering Nautilus with a spinning propeller, that I could then 2D animate in After Effects.

And here's what some of the finished shots look like, with animated 2D and model fish added. These shots will all have a "underwater" filter added. 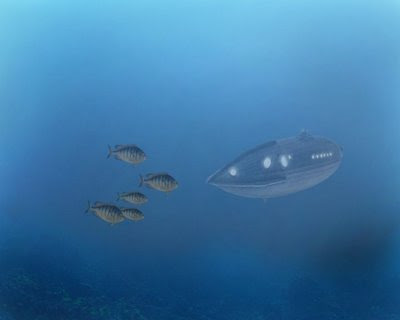 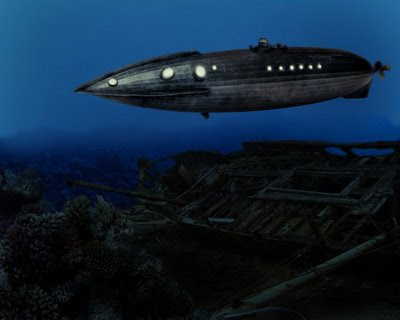 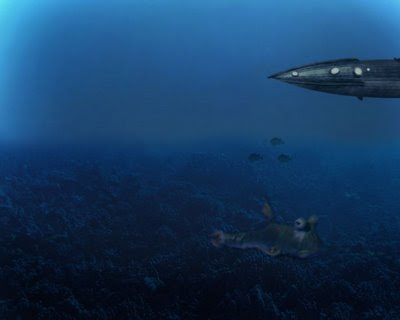 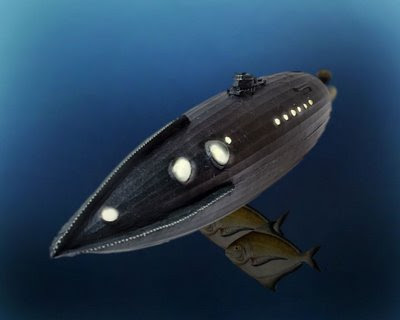 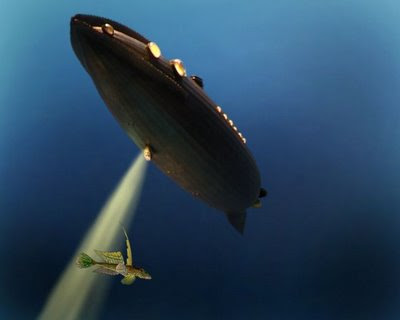 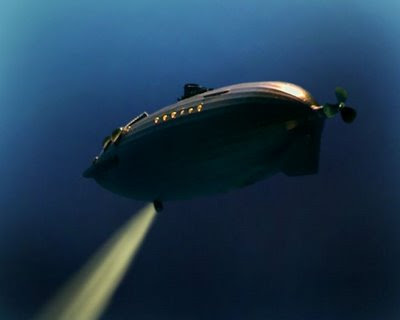 Posted by Richard Svensson at 11:15 PM

The Hindenburg under water... Dang ! Nice idea. ANd it does the trick very well. I like the shot wiht the light and the deep-sea creature very much. Great work. Again.
And it all has this 'turn of the century' feeling !

Thanks! This was really a last-minute solution. I'd like to say that desperation is the mother of all invention. So far, every time when all seems lost I've been able to stop and think "Heey..waitaminute! I can do it THIS way instead". Remarkably often, it turns out it was for the better of the project.