That's what friends are for

I've been helping out my buddy Daniel Lenéer on a couple of his film projects. The latest one, "Wavebreaker", is about the angst-ridden crew on the sub Nautilus. I'm building a period diver's helmet and some other stuff for the project. And I'll be providing animated fish and a giant squid in post production. But we also needed a practicle tentacle for interaction with the cast. I built one out of an old foam matress and covered it with skin and suction cups molded in latex. 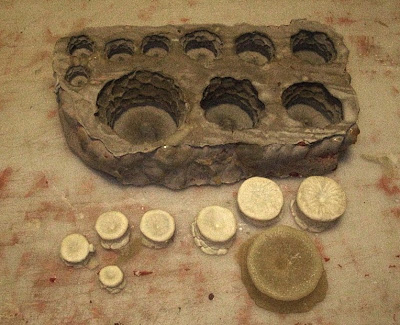 Suction cups galore! Ten different sizes were sculpted in Chavant clay and a mold of Ultracal 30 was made from them. It took about one week to cast as many cups as I needed, two casting sessions a day. 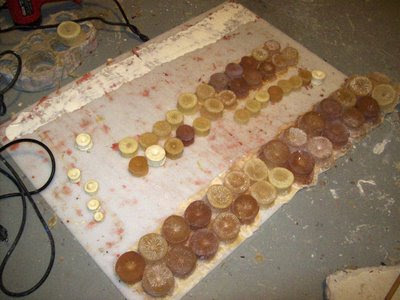 Even more suction cups! This is just as I started adding them to the tentacle. 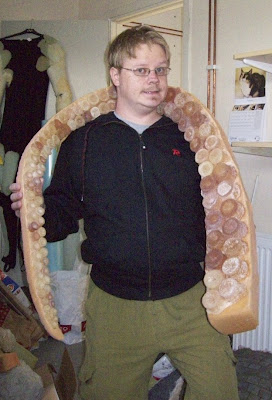 A little test hug, to see if it's flexible and cumfie enough. The skin has not been added yet. 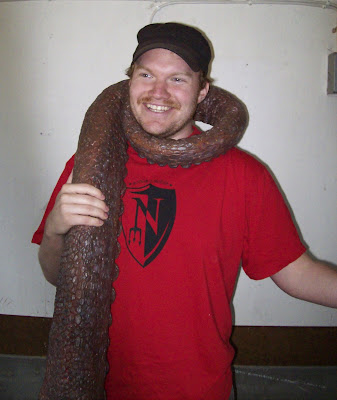 On to the actual shoot! Camera guy, and sometimes acting guy, Christopher cuddles the tentacle. 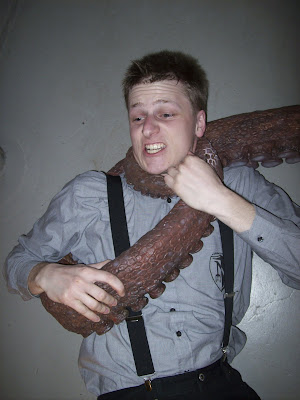 The tentacle finally meets its intended victim, Jimmy, who acts out the squeeze rolling on the floor, perspiring sweat added with a spray bottle. Fun stuff! 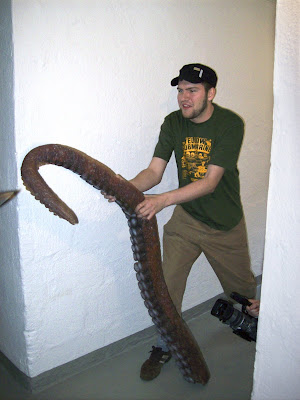 Danny decides the tentacle needs some proper motivation and steps in himself, a true hands-on director (not many women in his films yet. Hmmm...) 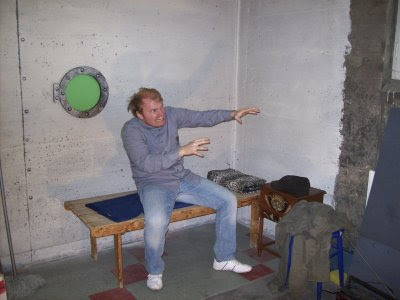 The interior of the Nautilus was the basement of the block of flats where Danny lives. Pure and simple. There are neutral walls and some pipes hanging from the cieling, but nothing else that could make that place go as "submarine interior". My initial reaction was "How the hell will we make this work?" Maybe we won't all the time, but there will be scenes where it will work. Other than that it was fun to do. We alternated using the basement set with filming scenes in front of a green screen. The bottom line is Danny & Co know how to make filming fun. I sometimes get lost in the technicalities of making a shot convincing. I once heard a film critic commenting on the "effects" in schlock meistro Ed Wood's ultra B-movie "Plan 9 From Outer Space". It isn't as much a case of Wood not having good effects as just having representative depictions of the effects he would've had, if he had the proper budget. For those of us who do non-commercial, or amateur, films it's the same thing. We do the best we can with what we have. Just because we don't have EVERYTHING we would need to make the finished film match our visions doesn't mean we shouldn't do it. If we reasoned like that nothing would get done.

Posted by Richard Svensson at 1:11 AM