A few years ago I made a replica of the mask used to portray the monstrous "Gorn" in the classic Star Trek episode "Arena", where he matched wits and brawn with the formidable force of nature known as William Shatner. My Gorn mask was built according to my personal opinions of how the original mask was constructed, as there is very little info on the subject.
You can read about the making of my Gorn mask here:
http://loneanimator.blogspot.se/2011/09/wrestling-with-gorn.html
The mask was actually eventually sold to Bobby Clark, the stuntman who played the monster. Bobby is now touring Trek conventions displaying my mask as the best replica he's seen, and he should know since he spent several days encapsulated in the hot rubber suit. 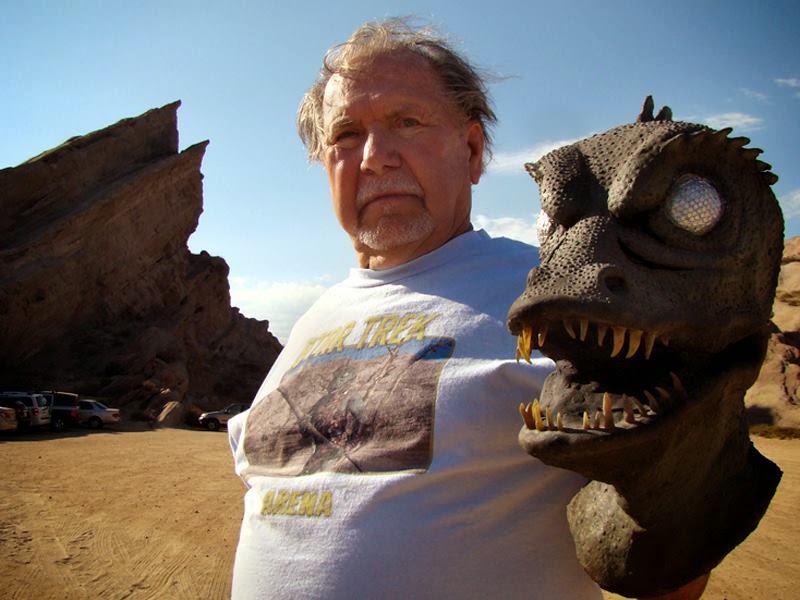 Here's Bobby with my mask at the actual location where "Arena" was filmed. I guess that's kind of cool! 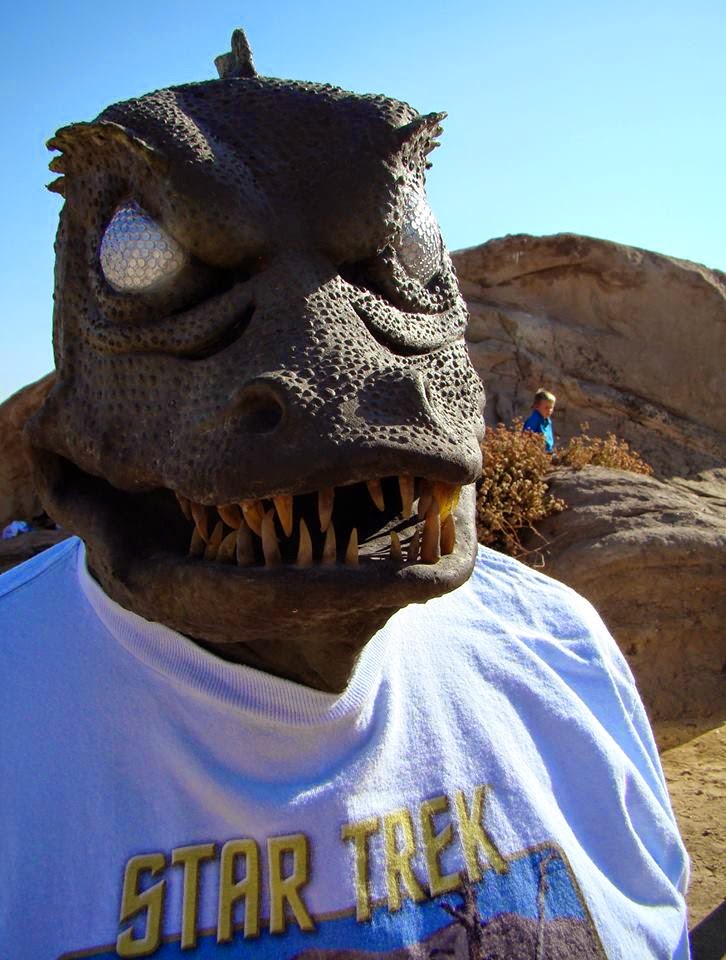 Bobby had some reservations about my version, as the original was apparently bigger, and the eyes were covered with glittery sequins. I haven't been able to find any sequins as small as they appear to be in the stills from the episode, but there might've been a sequin of that type in the 1960's. Maybe the Trek costume department had the stuff on hand. 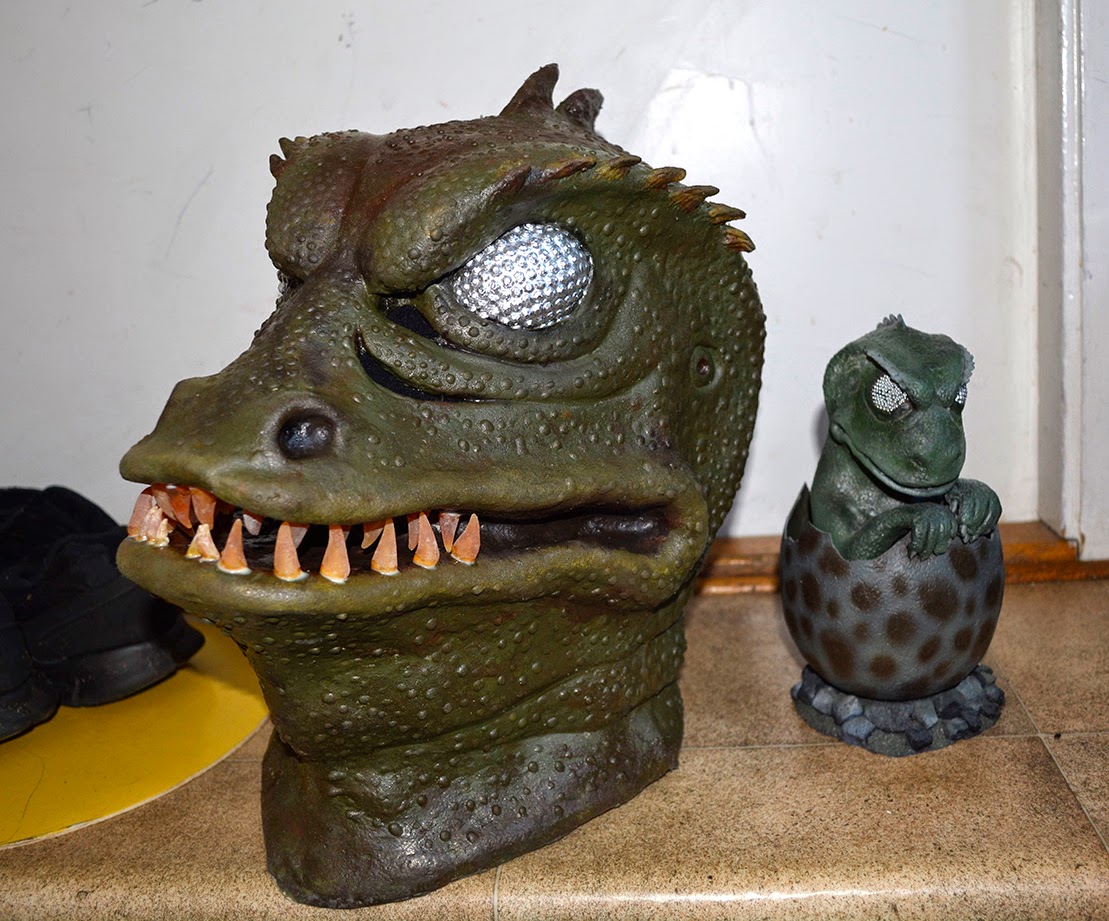 My old Gorn mask seems to be worn out and Bobby contacted me to ask me to make a new copy. Ideally, a new bigger version would've been much better, and I am actually working on that now, but to meet Bobby's convention schedule, a copy of the old version will have to do. So I recently sent a new Gorn mask off to him, along with a plastic baby hatchling. You can read about the making of the Gorn baby here:
http://loneanimator.blogspot.se/2011/09/making-gorn-baby.html
Now, is making copies of monsters someone else has designed and established a fun job? Not really, although it seems to be a popular way of making a name for yourself as a creative person. I see many wonderfully made replicas of the Alien, the Predator, and other famous movie monsters. But  I'd much rather  make my name doing my own thing.
It's surprisingly hard work copying what what's been done before, and the simpler the design, the harder it is to get it right. Just try to draw Donald Duck off the top of your head. I'm trying to do less of this kind of work, though getting an order from an old monster performer is flattering and hard to say no to. 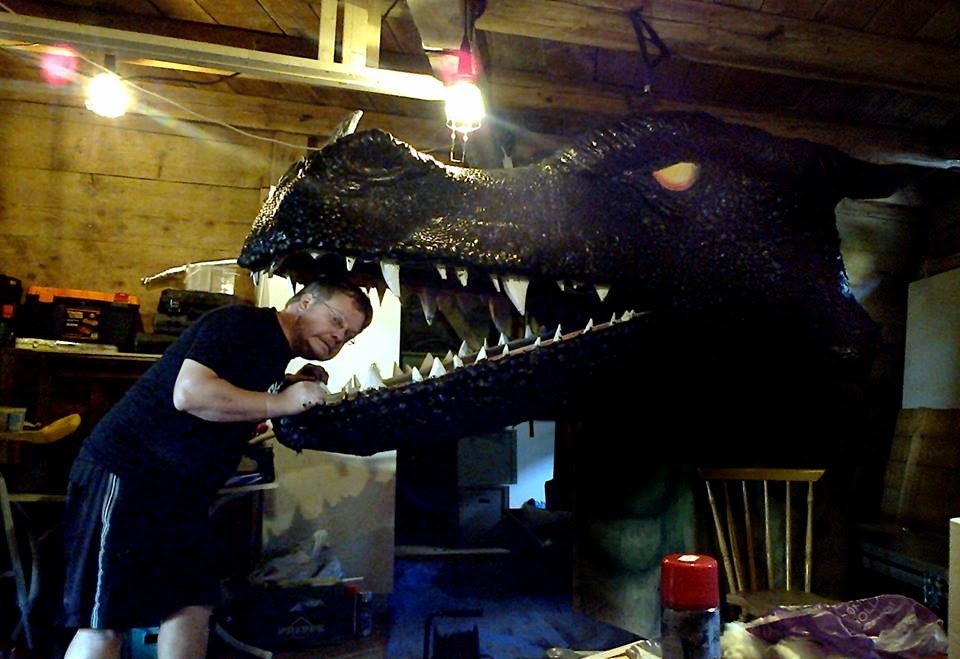 During the past four months I've been juggling four part-time jobs. I wouldn't recommend it, as I came very close to experiencing a burnout. I have friends who have gone through this ordeal, and it's no joke. One of my jobs was building props for the outdoor stage show "The Brothers Lionheart", based on a very popular Swedish children's book. I made plastic helmets, rubber spear tips, and similar stuff, but the main big thing was creating the paw and huge head of the dragon Katla. The production team bought a previously used fiberglass dragon head from another stage show. This head was very poorly detailed, and my job was to build up a completely new surface on it. This entailed mixing sculpted and cast skin pieces with structures built up directly on the fiberglass surface. I actually used a thick acrylic paint mixed with cotton to create Katla's new skin, and the result was a very durable, leathery structure. 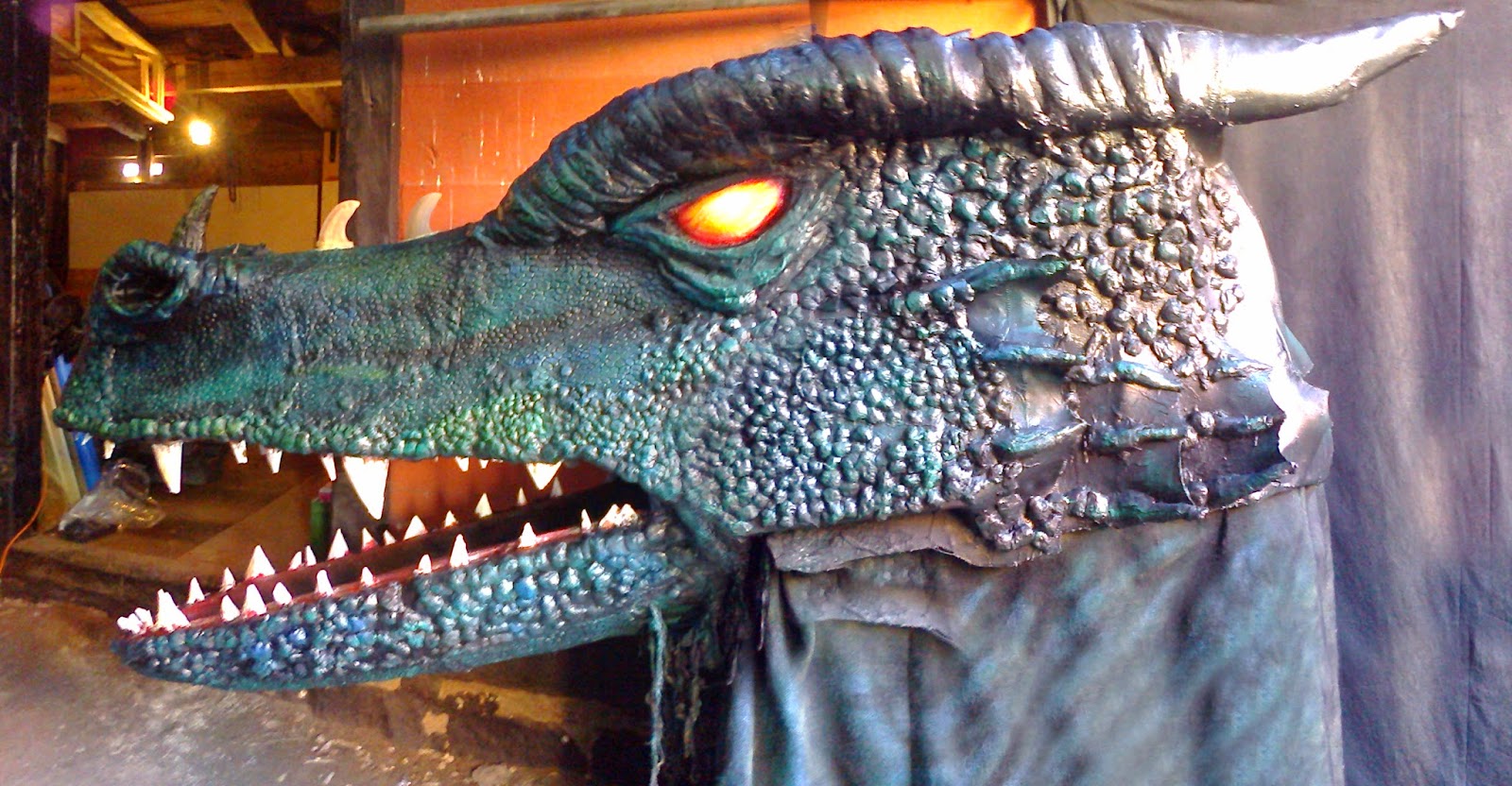 Here's the Katla head with a new lick of paint, but still not quite finished. 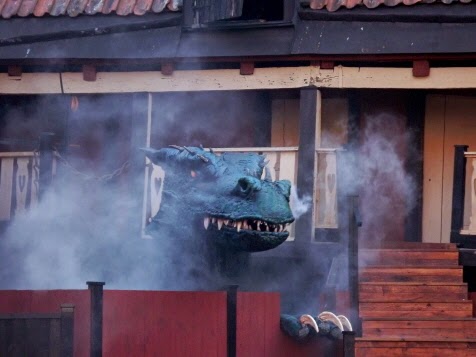 Katla in action during the show. A smoke gun located in the mouth and nostrils  provided necessary dragon ambiance, along with loud sound effects and dramatic music. Apparently Katla's a success with the audiences.

This is my last stage production. I've made a loooooot of them, starting when I was 13, creating props and masks for a fairy tale show. It's always hard work, but usually there's also lots of fun. Now, the fun seems to have gone out of the equation, and it's just work for me. As success coach Brian Tracy says, "if you're stuck in a job you don't like, get out of that job as you would get out of a burning house." And as the old Klingon proverb goes, "only a fool fights in a burning house."
For the sake of reducing stress and disappointment in my life I've now learnt to use the most powerful word there is: "NO!" Now I say no to all offers of working on stage productions. Instead I'm focusing all my efforts on my personal work, i e my miniature animation work, with occasional props and masks created for my own films, or for projects of close friends. If I can't use my creativity to put joy into my life, then what good is it for? I've no idea if my personal work will ever result in any sort of monetary success, but now that seems unimportant. I'm more concerned with what kind of legacy I can leave behind, and I'd rather realize my own ideas than someone else's. I've heard people say that's a pompous and presumptuous attitude, but shouldn't we believe in our own talents and abilities? Seriously; we must believe that our work comes to good, is important to other people, and is worth every second of effort.
Posted by Richard Svensson at 3:20 AM

That Dragon is the best prop for a play i have seen in a long time! A nearby high school is doing little shop of horrors, but its next year and they're not sure who's doing the puppet work.

Kyoryu puppets are going nicely, and I FINISHED THE LAST SHOT OF ANTEDILUVIAN. Will most likely post in a couple days. The duah puppet lost it's crest to a poor cast, and I STILL CANT GET THE DANG EYES STRAIGHT but the puppet looks nice.

I have a couple questions: what happened to your Black Howler puppet? And have you heard the good news?

MOTHRA, RODAN AND KING GHIDORAH WILL BE COMING IN GODZILLA 2!

I've decided to stop making stuff for stage shows, but it would've been nice to have "Little Shop of Horrors" Audrey II in my credentials.
Aligning eyes in a puppet and making them work as YOU want them to work is always a struggle. I haven't found a fool proof way of getting the eyes where I want them.
My howler puppet was supposed to be in my "Lovecraft Alphabet", but I scrapped it. It is, however, in the upcoming "The Other Gods".