Last year, British animator and King Kong enthusiast Lee Ashworth asked if I could make him a Kong replica puppet, and I set forth on my mission with some trepidation. Kong is one of the greatest pop culture icons of all time and I figured nailing down his look wouldn't be an easy task. I was right. It took me over a year to get the damn thing finished, and in the end it doesn't really look like Kong anyway. But we'll get back to that. I did blog about this project last year HERE.

After many attempts at sculpting Kong's face, Lee and I finally settled on this look. 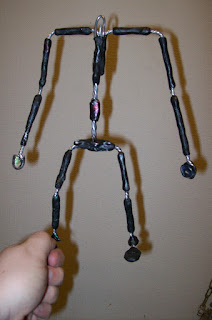 Lee had sent me a ball and socket armature for his Kong puppet, but I deemed it to small to work for the hairy Kong puppet; I couldn't find any fur that was short enough. Instead I made one of my usual aluminum wire armatures, built after the same dimensions (though slightly scaled down) as one of the original Kong armatures. 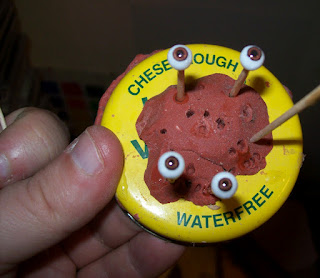 Kong's eyes were plastic beads, which had a filed down smooth flat top surface,with added printouts of Photoshop eye art, and then covered with Crystal Clear plastic from SmoothOn. 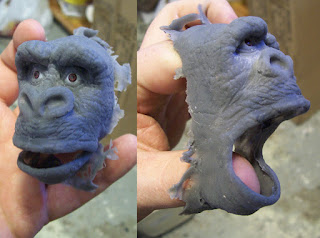 Though the original Kong face was built up by master craftsman Marcel Delgado using cotton and "dental dam" (some kind of latex material which creates condom-like skins) I knew that I could never get the same felixibility out of one of my own latex constructions. Therefore the face was moulded in DragonSkin FX silicone. The eyes were inserted into silicone sockets. 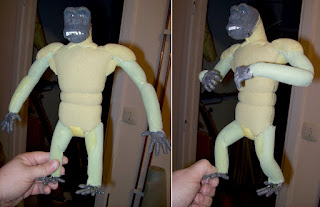 The body was simply padded with foam rubber pieces. I added only enough of detail to get some bulging shapes under the fur. 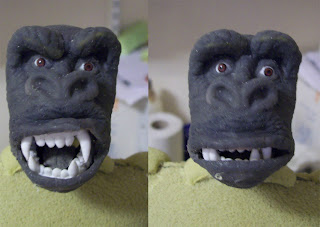 Kong's face had, besides the jointed jaw, aluminum and copper wires inside the brow and the upper lip. Teeth and gums were sculpted in Chavant clay and cast in moothCast plastic from silicone moulds. The tongue was built up with latex and cotton. 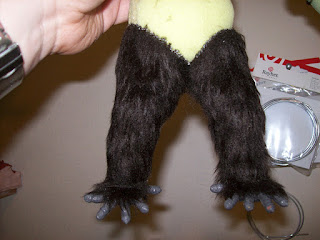 Apparently Kong's fur in the original movie wasn't as gorilla-black as the black and white film suggests. It's been said that it was actually brown. I found a soft fake fur of agreeable length, which I decided would work well. It's a very dark brown, and has a slight stretch to it. 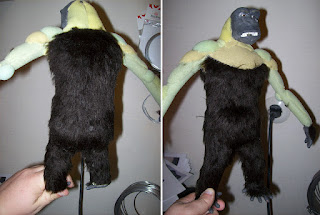 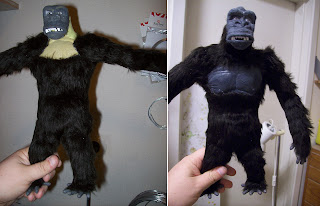 The build-up procedure was very simple. I just cut bits of the fur, like I was making patterns for an overall, and glued them down over the foam padding using a flexible contact cement. I also sculpted and cast in silicone Kong's ears and a chest piece. 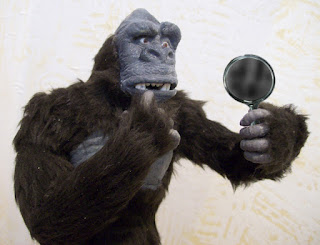 Adding fur to Kong's head was another matter. Had I simply glued down bits of the fur like for the rest of the body, he would've had a huge head of hair. Instead I had to clip tufts of hair and glue them down a few hairs at a time, gradually making my way up from the neck to the brow. 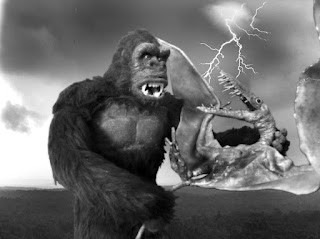 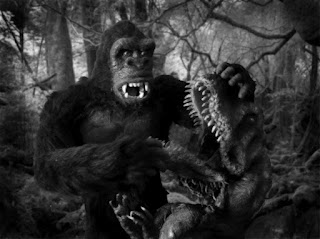 This is a real low-budget Kong. I can point out several faults with this puppet, including a too thick neck, a slightly crooked jaw, a fur that's too long, etc, etc. But I think of this as "Kong Mark 1". I plan to give this character a go again and again, until I've nailed him down and found the best fur for this project. At least Lee got a pretty decent practice puppet out of this one.
Posted by Richard Svensson at 12:36 AM

That is awesome! Nice work dude, and what a great way to do eyes, I'll have to remember that one.
Jeff

I stole the eye-making technique from Jim Henson's Creature Shop, though they use it to make bigger eyes.

"I can point out several faults with this puppet, including a too thick neck, a slightly crooked jaw, a fur that's too long, etc, etc." You're too much the perfectionist! Though, of course, I sympathise as I'm always dissatisfied with anything I make - but seriously, to an objective observer it looks bloody excellent!

i know the guy who owns the original armature (Bob Burns)and while this is made differently I think it is a wonderful work of art. Great job!

Hi, just passing by your site to see something that will interest me and luckily you impressed me with your great article and
I have a great time reading everything that is written. I'm looking forward to see more of your write-ups.
If you have time you can also visit my site which indicated below.

Thanks for given this information here about this blog.
Ac Repair in Jaipur
Ac Installation in Jaipur

Enquireus.com, our aim is customer delight ,at the same time as offering excessive high-quality professional repair provider at a price that is affordable and competitive. Whether or not your AC system isn't always cooling,we provides excellent workmanship via its pan-India network of professional and proven AC restore specialists. Enquireus provide you on less costly variety of AC repair carrier, AC fuel refilling, AC stabilizer set up, AC compressor repair, AC installation and uninstallation, AC PCB restore service in Jaipur.

If there is a problem with your phone, and you are submitting it to the repair service center, do not forget to reset it. In some cases - if the phone is completely dead, then nothing can be done, but in the rest of the cases, delete all the data, contact information, history, photos taken, etc., of the phone. In many cases, only the deleting does not work. This deleted content is retrieved from certain software.


Your Ro system desires regular maintenance to confirm it’s continually in nice operating condition, and nonetheless, it’s inevitable that you’ll get to conduct some troubleshooting from time to time. Some system malfunctions area unit is straightforward enough for you to diagnose and address on your own, whereas others area unit advanced enough to need the assistance of a maintenance technician who’s trained to figure with Ro systems. If you want a best RO Water Purifier Repair in Jaipur, then you can check here best RO Repair Services inquiries.

You made some first rate factors there. I regarded on the internet for the problem and found most people will go along with along with your website. online casino real money