I'm back with another hopefully delightful adaptation of a poem from H P Lovecraft's sonnet cycle "Fungi From Yuggoth." This piece of literature has provided me with quite a few subjects for films already, but I'm sure I'm not done pilfering from it yet. 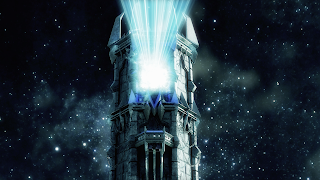 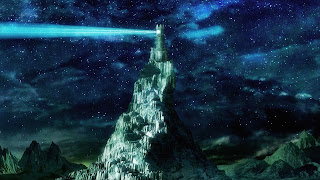 This film leaned heavily on using stock images from Depositphotos.com. The stuff I downloaded was altered here and there in Photoshop to suit my exact needs and ideas for the project. The light effects were stock CG animations from Videoblocks.com, somewhat altered in After Effects. 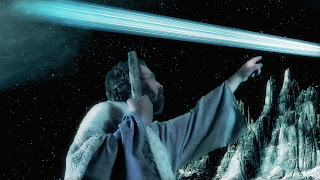 The shepherd was also a stock footage clip found over at (I believe) Pond5.com. Though parts of this project had been brewing for a few weeks, this film was finished rather quickly, which is why I didn't engage any of my regular cronies for the non-puppet characters. 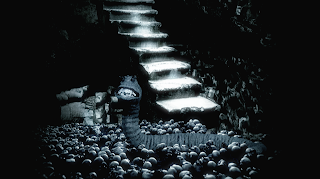 Speaking of puppet characters, there are only two of them in this film. Let's start with the one who appears first. This rather jolly-looking giant worm, lounging in a sea of skulls, was actually conceived for another project. I'm working on an adaptation of Edgar Allan Poe's "The Conqueror Worm", and this was originally meant to be the actual worm. I eventually decided against that idea, instead designing a monstrous worm that'll look far more maggot-like and repulsively familiar. 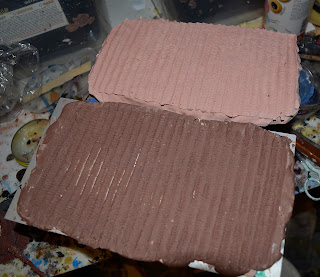 I wanted the worm's body to be clearly segmented, and since I didn't already have a skin texture mold with that exact look, I made a new plaster mold from a Monster Clay sculpture.

The armature for the worm was as simple as can be. A single 3 mm aluminum wire was used to create the armature. It was attached to a plastic bottle cap, where the head would go, and a 4 mm t-nut  used for tie-downs was stuck to the wire using a blend of super glue and baking soda. The wire was then covered by soft yarn.

A denser dark brown yarn was wrapped over the softer yarn to provide an outer surface which was sturdy. The tie-down hole was left uncovered, of course. 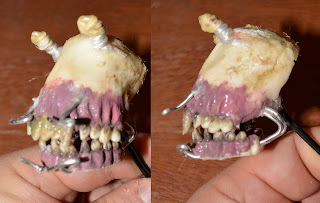 The head of the worm is actually a skull I made some years ago for a replica of King Kong. I never used it, and I thought I could press it into service to create a weirdly humanoid head for the worm. The knobs near the top of the head were supposed to move the eyebrows of Kong. For the worm, I used them as eyestalks. 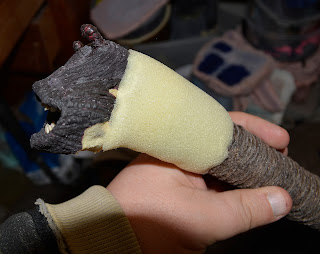 the actual head was built up using strips of soft polyurethane foam, covered with skins of tinted latex cast in skin texture molds. The same soft foam was attached between the head and the body to create a natural transition.

The segmented skin was cast as two long bits of tinted latex, and attached to the yarn-wrapped body using liquid latex as a bonding material. 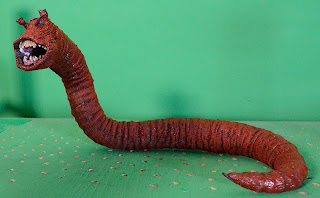 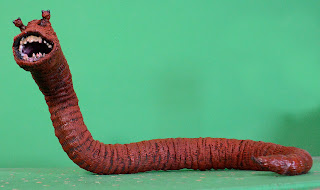 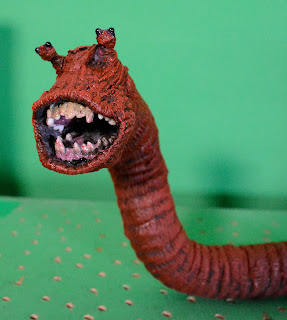 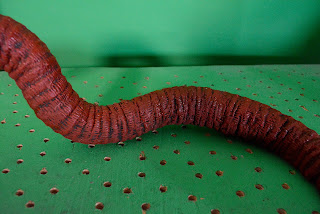 As the worm was originally built to represent the ominous entity of the Poe poem it was colored red using tinted latex dry brushed on with a foam sponge. In this film, it was changed to a greyish green using color tools in After Effects. The four small black eyes on the stalks are plastic beads. 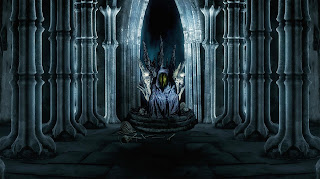 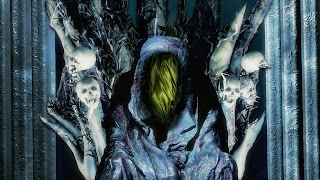 The Elder Thing inhabiting the ancient pharos (lighthouse) was said to wear a bulging yellow silken mask. This character was achieved by using several stock photos and computer-generated images blended together in Photoshop. The moving silk mask is a CG flag, waving in the wind, but here deformed using After Effects tools, and changed into a bright yellow. 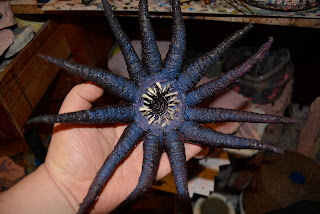 We finally see what's under the mask, as a toothy mouth surrounded by writhing tentacles pops out. This stop-motion construction was simply made using 12 aluminum wires covered in soft yarn and dressed with scaly latex skins. The mouth is just an immobile hole decorated with latex and cotton, with teeth made from the same blend of materials. 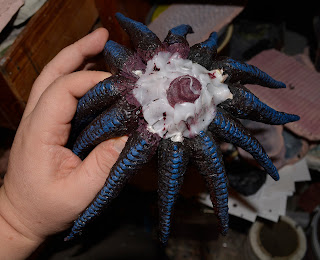 The tentacles are held in place with blobs of Polymorph thermoplastic. This also created an attachment point for the rig holding up the mouth. 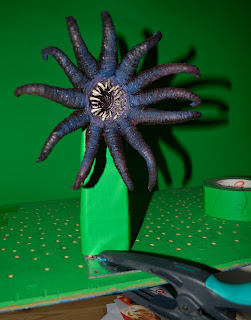 The very simple rig was just a piece of wood painted with green chroma key paint and attached to an aluminum 90° angle profile, held down with a powerful glue clamp. A pair of screws in the wood allowed the mouth the be attached using more thermoplastic.

Making short films hardly using any actors and with stock images and clips for editing material is, of course, somewhat of an expression of laziness, but I like the results one can achieve with stock media. Also, in these times when we all sit isolated it's not easy getting around to shoot original content.
Posted by Richard Svensson at 8:37 AM