Last autumn I discovered the vibrant, funny and slightly irreverent children's poetry of Darren Sardelli. He's both an author of several books but he's also doing lots of work within the US educational system, inspiring kids to start writing. Good stuff, in other words! 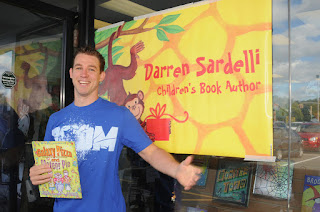 Of course, I was mainly attracted to one of his poems called "The Two-Headed Monster." I thought it could become a bubbly, crazy YouTube video, featuring a really weird and goofy stop-motion monster. I contacted Darren and he gave me the go-ahead straight away. 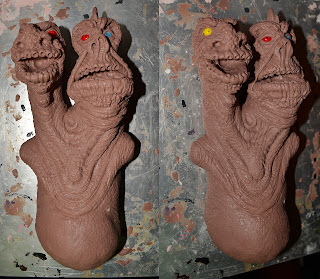 So let's start with the two-headed star of the show because that's what I did. I sculpted the heads and the torso in medium grade Monster Clay, using plastic pearls for eyes. I didn't sketch out or prepare any designs for this character other than I wanted to make it look goofy and maybe a bit scary in the same way that the Mad Hatter and the Cheshire cat from Alice In Wonderland are a bit scary because of their craziness. I applied a mold of dental plaster over the sculpture. 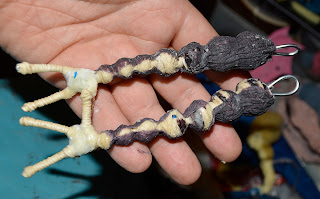 I wanted to make the arms a bit cartoony and bendy-toy-bendy, so this is what I came up with. The balls or bumps that make out the arms are actually yarn wrapped around aluminum wires to create these shapes. The wrinkly skin is bits of latex cast in a skin texture mold. 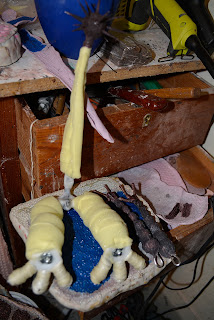 As per usual this puppet armature is made from bundles of aluminum wires held together with Polymorph thermoplastic. You can see in this photo the t-nut tie-downs in the feet, as well as the spiked ball at the end of the tail. It's made from a paper ball covered with cotton dipped in tinted latex, with cotton/latex spikes attached. 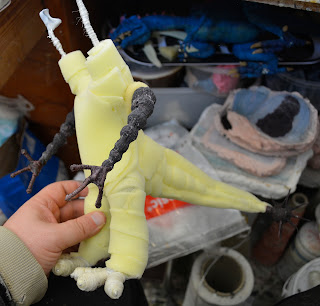 The body didn't have to be all that detailed when it came to the padding. I just wanted it to be lumpy. Thin strips of polyurethane foam were wrapped and glued down over the armature. 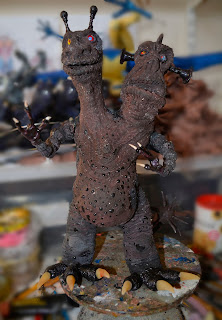 Here's the puppet covered up with latex skin pieces, and with the cast torso latex piece attached to the armature and the foam padding. I've also stuffed some cotton balls into the belly. 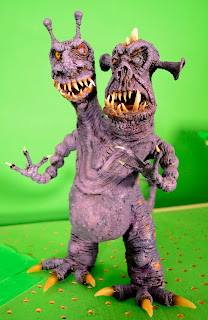 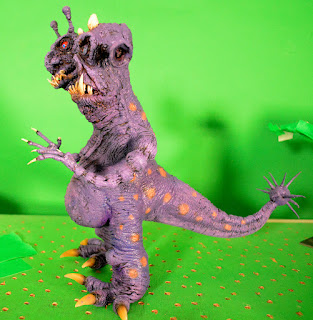 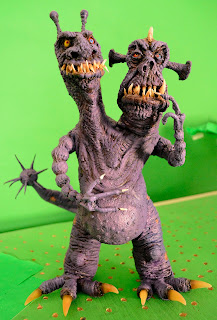 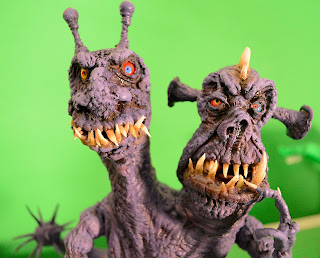 Here's the final objet d'art. Teeth and claws are also latex, mixed with cotton. The final paint job is achieved with tinted latex, dry brushed on. The plastic ball eyes are simply animated by sticking a needle into the pupil hole and twisted around. 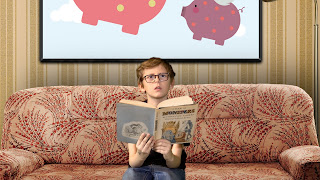 Here's our young hero of the piece, played by Hannes Johansson (reading appropriate literature in the shape of Ruth Manning-Sanders "Monsters.") Hannes is actually placed into a wholly fake and Photoshopped room. Almost all of the elements used to create the backgrounds were stock images downloaded from Depositphotos.com. 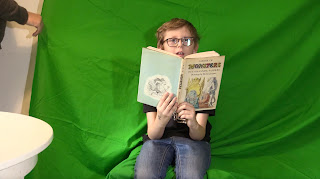 In actuality, Hannes was residing in a very simple green screen set-up, which is how all the scenes with actors were shot for the film. 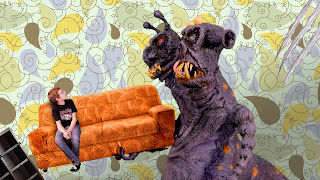 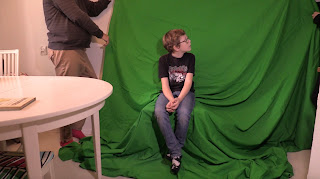 In one shot, Hannes is sitting on the couch that gets eaten by the monster. The couch is a Photoshop printout glued to a bit of stiff card, and Hannes is cut out from his green screen environs and stuck to the couch by manual tracking in After Effects. There is a semi-automatic tracking tool in AE, but I've only made it work satisfactorily once. 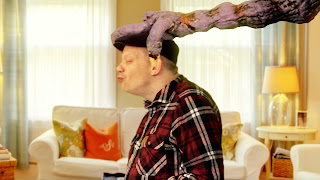 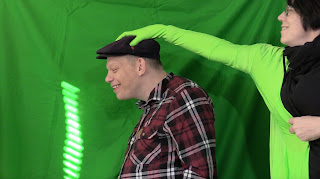 The shot where grandpa (Andreas Pettersson) gets his hat plucked off his head was another blend of interaction and animation. Hannes' mom Martina stuck her arm into a green bodysuit and snatched the hat away. In After Effects her hand was keyed out and replaced with the monster's animated hand. 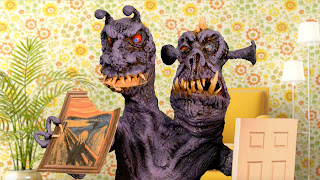 All the stuff the monster eats was made the same way as the couch: It's all Photoshop printouts glued onto thick bits of card. When the monster eats I just snip off bits of the image with a pair of small sharp scissors. 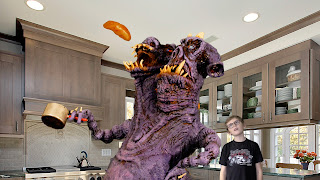 One thing is not made from paper, though, namely mom's cooking. That peculiar dish is a bit of oil-based clay animated like a shapeless blob flying into the monster's mouth.

I'd like to adapt more of Darren's fun poems for kids, although I can see that my videos made for a younger audience won't reach the kind of viewing numbers my Lovecraftian and pulp horror pieces get. But it's an area that's almost unexplored by me and I believe I can achieve some entertaining and imaginative stuff in that department too.
Posted by Richard Svensson at 11:59 AM