Continuing from my previous blog post; my other animated character in my adaptation of H P Lovecraft's "Memory" is an ape, who actually played many apes in the finished film. 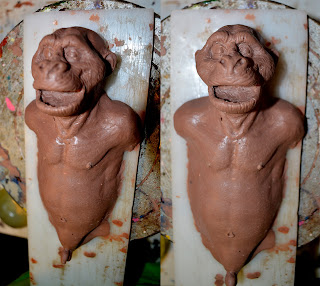 It's very rare that I do a puppet which is anthropomorphic or based on real living things, so I relished this opportunity to create a puppet character which took huge inspiration from real life, at least to an extent. In Lovecraft's prose poem there are "little apes" living among the crumbling ruins of a very past civilization. It is implied (at least in my mind) that these apes are actually us; humans who have de-evolved into more primitive beings. So, I didn't want to make these apes entirely like the apes of today, the gorilla, the orangutan and the chimpanzee. Instead I looked at reconstructions of prehistoric man, and the various links from ape to man. I specifically focused on Homo Habilis, and took inspiration from that ancestor of ours.

I sculpted the front of the head and torso as one piece in Monster Clay medium grade, which both gave me a good overall feel for the character, as well as creating the base for the latex skin covering the most important parts of the puppet. 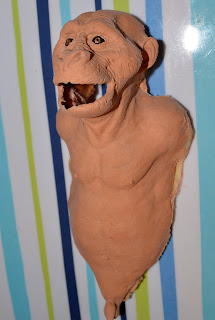 Here's how the latex skin, cast in a dental plaster mold, looks when it's trimmed and cleaned up. As you can see I've also added eyes, made from black plastic beads and placed in latex sockets. There are some apes and monkeys who have strange black eyes with golden irises. That's the weird look I wanted for my ape. To add some support I've stuck thin polyurethane foam dipped in latex on the inside of the skin. 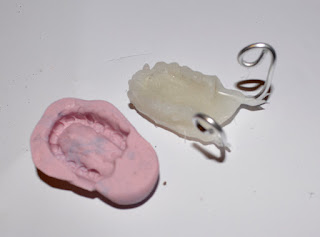 To create the mouth I sculpted the teeth in clay, and used a quick-curing silicone paste to cast a mold around it. I then melted some of the thermoplastic I use for my armatures, and pressed it into the teeth mold. Before the plastic had cooled I also stuck some aluminum wires into the mold, creating the joints for the jaw. 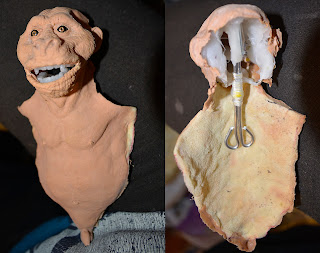 The teeth were attached to the mouth by pressing in more thermoplastic into the head cavity, and then simply attaching the teeth to that "subskull" along with the aluminum wires. There is also a thin copper wire wrapped in sewing string and latex inserted into the upper lip, so it can be drawn back to expose the teeth. 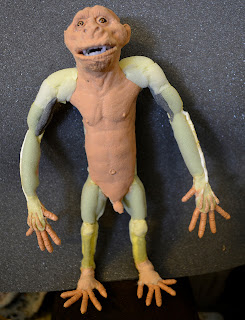 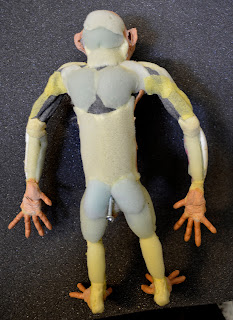 That was actually the complicated part of the puppet-making! The padding of the aluminum wire armature was done with my usual mix of thin polyurethane strips and cotton dipped in latex. You can see a screw sticking out from the ape's butt. That's an attachment point for an animation support arm, which I actually never used. 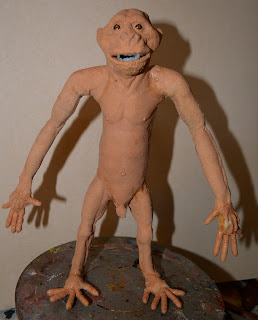 Thin tinted patches of latex skin was attached to the foam using latex as a bonding agent. 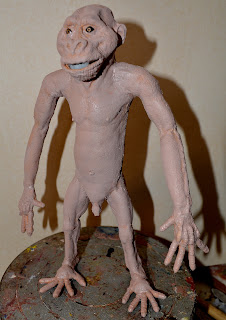 I thought this original skin hue was too strong, so I drybrushed the puppet with tinted latex to bring it down to a more natural grey/pink. 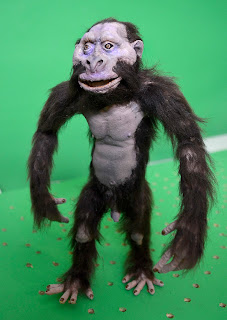 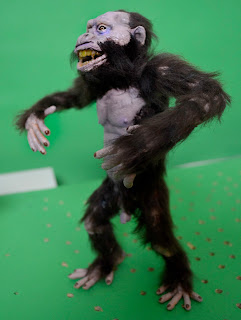 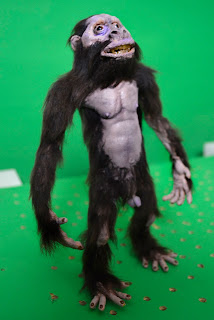 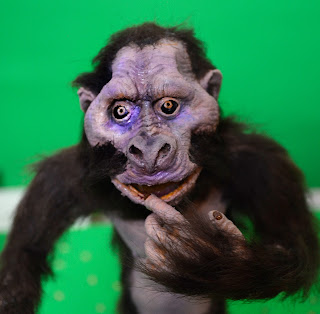 Here's how the finished ape turned out. The fur is fake and cut from an old coat. Instead of making a pattern from the fur, which is attached to textile, I cut small clumps of hair and glued it on in sections, using latex as a bonding agent. This created a kind of distressed, natural look of wear and tear that you can sometimes see with adult apes. I have explained the process in another post, and apart from me using a silicone glue in that description, the method is exactly the same. 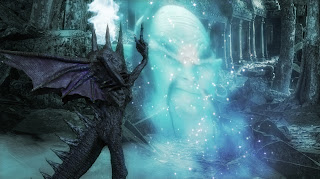 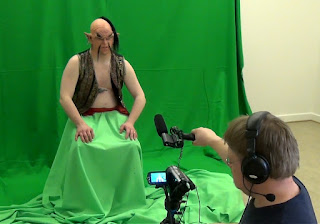 There is another character in this film, a genie who travels along the moonbeams and interacts with the demon who lives in the valley of the apes. This role is played by a real person, Henrik Daleke. He actually played this part in a production of "Aladdin" I made with a bunch of people with slight disabilities some years ago. The genie in the "Memory" film is made up from discarded takes from that production. I only used Henrik's face and warped it in After Effects to make it look fluid and strange.

Posted by Richard Svensson at 10:40 AM