A Swedish guy working on a Norwegian ad agency approached me a couple of months ago about buying masks from me. He had seen my work on the web (another testament to the practicality of marketing your creativity for free on the Internet) and wanted to use an old monster mask for an ad about the perils of having real "monsters" in your workplace. This is the mask he wanted to use: 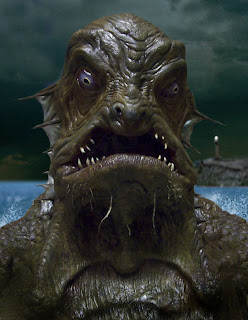 The mask had to be modified to fit a woman of average build. In the ad she represented the kind of co-worker that could suddenly become nasty, and spread bad will through out the company. I cast a new, fresh version of the mask in latex and gave it an, shall we say, unexpected paint job. 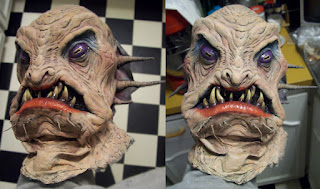 I had to build up a new, slender neck, so the mask could be fitted inside the neckline of a blouse. Here's how it looked in the finished ad with a wig and modified eyes: 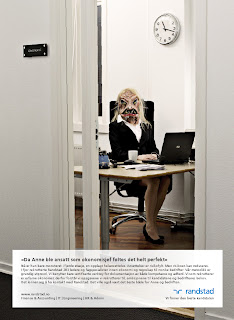 The customer who had ordered the ad is a recruitment firm, who also wanted to address the problem of old thinking dominating and overshadowing new talent; "dinosaurs" in the workplace, as it were. The ad people wanted me to build 7-8 full-head dinosaur masks, but I strongly objected since it would've taken me forever to sculpt and finish the masks in latex. It would also have been very expensive. Originally the ad people had approached a CGI company, with the intention of rendering the dinos digitally. But that company wanted an ungodly amount of money, which the recruitment firm wasn't at all very keen to put up, so a practical approach was considered instead.

I put forward another solution; that I could build miniature dino heads with slim necks, which the ad guys could then photograph and Photoshop in on top of the heads of the models/extras in the ad image. I made a couple of sculptures to underline my suggestion, and the ad people went for it. 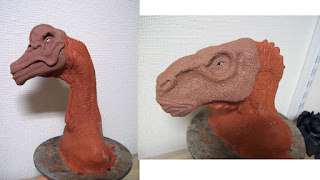 I made a total of 7 dino puppet heads. The faces were fixed in dour expressions, but the necks could be adjusted. 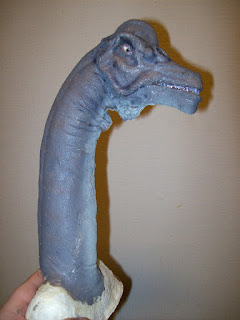 Not all of the heads were used in the end, but I think the result turned out quite well. Here's the finished ad: 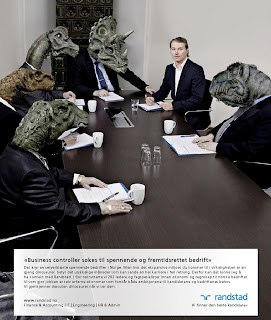 I only had a week to build all the dino heads, plus the new monster mask. I've probably never worked so fast before, but I'm happy with the result. Most importantly, the ad agency and the recruitment firm were happy, and while this was a real low-budget project I was still paid a quite handsome sum.

Posted by Richard Svensson at 12:14 AM

That is AWESOME news! And fantastic results! What did I say in my email to you recently...?

I do have two other projects that I'll be finishing within the next few weeks -also work for others, but fun work, and work that could give me some good exposure.

What a busy bee! BTW, what do the different colours of modelling clay in the photo of the brachiosaur and iguanadon sculptures indicate?

The darker brown clay is the denser Chavant, and the lighter reddish-brown is a softer clay, sold here in Sweden as "Plastilina". I use the latter one to quickly slap together larger shapes. I don't really like to use it for the finished sculpture that will have a plaster mould built up around it, since this softer clay sticks quite well to the plaster. The Chavant sort of just peels off.

Ah, so is the soft clay used as a sort of 'core', with the denser Chavant layered on top to get the final shape and fine surface detail? I'm also confused about which Chavant you use as there are several sold by my nearest stockist: Soft, Medium, Hard (all are grey-green) and Le Beau Touché, which is terracotta colour, exactly the same as yours. I only ask because I'm thinking of changing to Chavant: I've been using plasticine (NewPlast, as used by Aardman) for sculpting my masters, but we're going through a heatwave at the moment and I've had to stop sculpting, the clay just goes soft and sticky! It's given me a foretaste of what summer might be like when it really gets going and I don't want to have to stop sculpting for several weeks.

It sounds like I've got "Le Beau Touché". When I bought my clay it was only sold as "Chavant", plain and simple. An art & crafts store was selling off what was left of their stock, so I got a bunch of packages for a very good price. Chavant is my favourite clay. I've tried many others, but this is the one that serves me best

Brilliant, thanks for that! I thought maybe there were other colours I didn't know about, but since posting that question I had more of a look on the web and it looks like those are the colours, so you must be using Le Beau Touché. I think I need to go shopping...