Frodo in the world of home movies.

Here's a real curio for you: This short clip comes from a bigger project that was never finished. Somewhere around 1999 I was part of a group of Swedish artists and musicians who worked on a musical video version of "Lord of the Rings"! For real! This was just before Peter Jackson´s mega-version of the books grabbed the world. At the end of the 1960's, Krister Gustavsson and Stefan Håkansson had written folk-rock songs based on the many poems of the books. (You can find Krister's YouTube channel HERE.)
At first we got permission from the publisher Harper Collins and the Tolkien estate to do an amateur version of the story. Then New Line Cinema pulled all the worldwide rights to protect their interests. This could very well be the biggest disappointment of my life. Now I realize that our version was very humble indeed and not much different from other amateur efforts, with hand-held cams and kids for hobbits. Those of you who know the books can see that I've changed the barrow-wight fight a little bit. For those of you who don't know the story, it is as follows: The Hobbits are captured by a ghost called a barrow-wight, but rescued by Tom Bombadil, master of the Old Forest.
This past weekend I found the old tape containing this particular footage, the devil went into me and I took a holiday from my other obligations to piece together a little video featuring this episode from the book "The Fellowship of the Ring". On Saturday evening I started building the barrow-wight hand and late Sunday morning it was ready to be animated. It's probably the fastest I've ever built a puppet. On Sunday evening the animation was finished and edited into the live-action footage. I wish all projects would go as easy as this one. 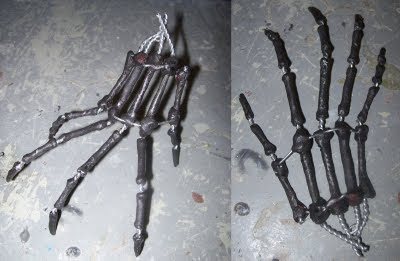 Here's the aluminum wire / Friendly Plastic hand armature. Nothing fancy, but it could do everything a human hand can do. 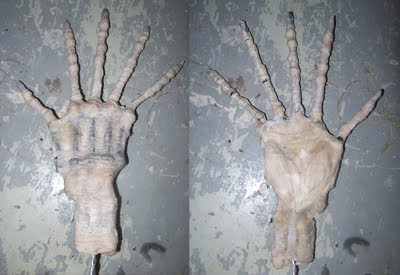 The hand armature covered with latex skins and a latex / cotton mix. It's been attached to a support rod made out of braided aluminum wire. 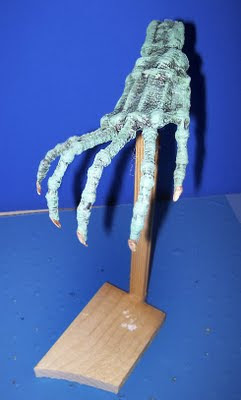 A pretty simple set-up as you can see. But why make things unneccesarily complicated? 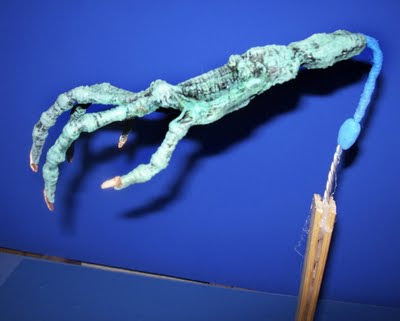 The support rod was partially painted blue to be keyed out with the rest of the background.

There are a number of Tolkien fan film projects out there, and quite a bit of them on YouTube. Most of them are parodies but some are dead serious (perhaps a bit too serious for there own good). I've done a couple and am planning to do more. I'm a member of a forum on the web page "theonering.net", originally devoted to Peter Jackson's films, but now more of a stomping ground for Tolkien purists. There's a section for "fan art", including music and some home-made films. Some of us posting there have recieved quite a beating from those who believe that nothing should be produced without the approval of the Tolkien Estate. Tolkien himself stated that he'd like to approve all the art being produced based on his ideas, and now that he's gone, that job falls to the Estate. But I must say the taste and judgement of the Tolkien Estate is highly debatable.
I use a by-line in my forum posts that read: "I would draw some of the great tales in fullness, and leave many only placed in the scheme, and sketched. The cycles should be linked to a majestic whole, and yet leave scope for other minds and hands, wielding paint and music and drama." Now, this is a quote from a letter that Tolkien wrote to editor Milton Waldman to convince him to publish "The Silmarillion" and "The Lord of the Rings" simultaniously. I took this quote as a postive affirmation that Tolkien would approve of at least of what some of us are attempting to do. He had, after all, the ambition to create an alternative mythology for Great Britain, that hopefully would be as appreciated and widely read (and studied) as any other real mythology. It was, however, pointed out to me on that forum that before that statement in the letter, Tolkien makes it clear he has all but abandoned this early idea for a larger, shared mythology. Thus, using that quote as a statement is a great misjustice to Tolkien's memory.
The concept of that great shared mythology may not have been a reality when "The Lord of the Rings" was first published, but, by God, it certainly is now. I'd say Tolkien's ideas and imagination have grown out of the hands of any copyright holders. I'd say it falls to the love of us fans to do his work real justice, without any thoughts of any profit besides the shared joy of the finished result. I'll go so far as to say that some fan efforts help make up the perception of LOTR et al, for some of us. The fan efforts help make this a phenomenon, and I'm surprised this fact is not acknowledged. It's not any damn commerce that make a myth, but constant, honest retelling of it.

In the 60's when "The Hobbit" and "The Lord of the Rings" were absorbed by pop and hippie culture Tolkien was, as I understand it, befuddled by the great interest, the fanzines, the rock songs, the "Frodo Lives" stickers and the people trampling the flowers in the garden of his peaceful Oxford home just to take pictures of him and his wife. But as far as I know he never raised any issues of copyright infringement or claimed any "creative injury". And he very well could've, had he been inclined. The only debacle where he actually took action was against Ace Books, who published "The Lord of the Rings" in the US without telling him, using a loophole in the copyright law. In order to stop those books Tolkien addressed his most powerful ally; his fans, and asked them to boycott the Ace editions, which they did. I think that says a lot about the relationship between this author and his admirers.

A bit of a rant there, I'm afraid, but I feel strongly about all of this.
Posted by Richard Svensson at 11:36 PM

THAT HAND! That hand is a work of genius!

Thanks, Shelley! This time it was just a question of copying nature.